The novel scientific field of glycomics, or glycobiol-ogy, may be defined most simply as the study of the structure, synthesis and biological function of all glycans and glycoconju-gates in simple and complex systems.

The novel scientific field of glycomics, or glycobiol-ogy, may be defined most simply as the study of the structure, synthesis and biological function of all glycans (may be referred to as oligosaccharides or polysaccharides, depending on size) and glycoconju-gates in simple and complex systems (Varkin et al., 1999; Fukuda and Hindsgauld, 2000; Alper, 2001). The application of glycomics or glycobiology is sometimes called glycotechnology to distinguish it from biotech-nology (referring to glycans rather than proteins and nucleic acids). However, many in the biotech arena consider glycobiology one of the research fields encompassed by the term biotechnology. In the postgenomic era, the intricacies of protein glycosyla-tion, the mechanisms of genetic control, and the internal and external factors influencing the extent and patterns of glycosylation are important to under-standing protein function and proteomics. Like proteins and nucleic acids, glycans are biopolymers. While once referred to as the last frontier of pharmaceutical discovery, recent advances in the biotechnology of discovering, cloning, and harnessing sugar cleaving and synthesizing enzymes have enabled glycobiologists to analyze and manipulate complex carbohydrates more easily (Walsh and Jefferis, 2006).

Many of the proteins produced by animal cells contain attached sugar moieties, making them glyco-proteins). The majority of protein-based medicinal agents contain some form of post-translational mod-ification that can profoundly affect the biological activity of that protein. Bacterial hosts for recombinant DNA could produce the animal proteins with identical or nearly identical amino acid sequences. The bacteria, however, lacked the “machinery” to attach sugar moieties to proteins (a process called glycosylation). Many of the non-glycosylated proteins differed in their biological activity as compared to the native glycoprotein. The production of animal pro-teins that lacked glycosylation provided an unex-pected opportunity to study the functional role of sugar molecules on glycoproteins. There has been extensive progress in glycoengineering of yeast to humanize N-glycosylation pathways resulting in therapeutic glycoprotein expression in yeasts (Wildt and Gerngross, 2005).

The complexity of the field can best be illustrated by reviewing the building blocks of glycans, the simple carbohydrates called saccharides or sugars and theirderivatives (i.e., amino sugars). Simple carbohydrates can be attached to other types of biological molecules to form glycoconjugates including glycoproteins (pre-dominantly protein), glycolipids and proteoglycans (about 95% polysaccharide and 5% protein). While carbohydrate chemistry and biology have been active areas of research for centuries,  advances in biotechnol-ogy have provided techniques and added energy to the study of glycans. Oligosaccharides found conjugated to proteins (glycoproteins) and lipids (glycolipids) display a tremendous structural diversity. The linkages of the monomeric units in proteins and in nucleic acids are generally consistent in all such molecules. Glycans, however, exhibit far greater variability in the linkage between monomeric units than that found in the other biopolymers. As an example, Figure 5 illustrates the common linkage sites to create polymers of glucose. Glucose can be linked at four positions: C-2, C-3, C-4, and C-6 and also can take one of two possible anomeric configurations at C-2 (a and b). The effect of multiple linkage arrangements is seen in the estimate of Kobata (Kobata, 1996). He has estimated that for a 10-mer (oligomer of length 10) the number of structurally distinct linear oligomers for each of the biopolymers is: DNA (with 4 possible bases), 1.04 106; protein (with 20 possible amino acids), 1.28 1013; and oligosacchar-ide (with eight monosaccharide types), 1.34 1018. 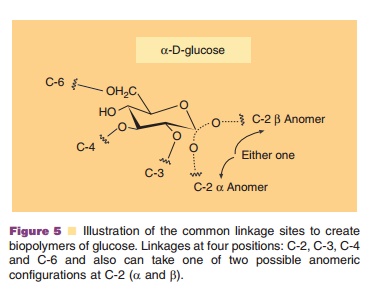 Patterns of glycosylation affect significantly the biological activity of proteins (McAuliffe and Hindsgaud, 2000; Wildt and Gerngross, 2005; Walsh and Jefferis, 2006). Many of the therapeutically used recombinant DNA-produced proteins are glycosy-lated including erythropoietin, glucocerebrosidase and tissue plasminogen activator. Without the appro-priate carbohydrates attached, none of these proteins will function therapeutically as does the parent glycoprotein. Glycoforms (variations of the glycosyla-tion pattern of a glycoprotein) of the same protein may differ in physicochemical and biochemical properties. For example, erythropoietin has one O-linked and three N-linked glycosylation sites. The removal of the terminal sugars at each site destroys in vivo activity and removing all sugars results in a more rapid clearance of the molecule and a shorter circulatory half-life (Takeuchi et al., 1990). Yet, the opposite effect is observed for the deglycosylation of the hematopoietic cytokine granulocyte-macrophage colony-stimulating factor (GM-CSF) (Cebon et al., 1990). In that case, removing the carbohydrate residues increases the specific activity sixfold. The sugars of glycoproteins are known to play a role in the recognition and binding of biomolecules to other molecules in disease states such as asthma, rheuma-toid arthritis, cancer, HIV-infection, the flu and other infectious diseases.