1. Who was the greatest ruler of Sangama Dynasty?

2. Which was the most common animal depicted on the pillars of Vijayanagara style?

3. Who was the last ruler of the Sangama Dynasty?

4. Who ended the Sultanate in Madurai?

5. Name the Bahmani King who was a linguist and a poet.

1. Penukonda was the capital of Aravidu dynasty.

3. Mahmud Gawan used Persian chemists to teach the preparation and use of gunpowder.

4. In Vijayanagara administration Gauda, Village headman looked after the affairs of villages.

IV .1 . Assertion (A): The Vijayanagar army was considered one of the feared armies in India.

a) R is not the correct explanation of A

b) R is correct explanation of A

c) A is correct and R is wrong

Answer: b) R is correct explanation of A

2. Find out the wrong pair

4. Consider the following statements and find out which is/are correct

I. Turquoise throne is one of the bejewelled royal seats of Persian kings described in Firdausi’s Shah Nama.

II. The fertile regions between the rivers Krishna and Tungabhadra and Krishna–Godavari delta were the zones of conflict among the rulers of Vijayanagar, and Bahmani.

III. Muhammad I was educated at Multan.

1. Harihara and Bukka were the founder of Bahmani kingdom. (False)

2. Krishnadeva Raya, who reigned for 20 years, was the most illustrious rulers of Sangama dynasty. (False)

4. Kingship of Vijayanagar administration was hereditary, based on the principle of primo geniture. (True)

5. There were 18 monarchs of the Bahmani dynasty. (True)

1. The four dynasties of Vijayanagara kingdom with reference to prominent rulers of each dynasty.

It took place in 1565, at Talikota between the Vijayanagar empire and the combined forces of Deccan Muslim kingdoms. Vijayanagar Empire was completely destroyed. There was terrible human slaughter. All the buildings, palaces, temples and city of Hampi were destroyed.

3. The structure of governance in Vijayanagar kingdom.

The empire was divided into different mandalams (provinces), nadus (districts), sthalas (taluks) and finally into gramas (villages). Each province was administered by a governor called Mandalesvara. The lowest unit of the administration was the village. Each village had a grama sabha. Gauda, village headman, looked after the affairs of the village.

Alaud-din Hasan Shah was educated at Multan. He took special care in founding a school to educate his sons. He opened institutions for the purpose of education to the children of noble families in the art of soldiery.

1. Discuss the career and achievements of Krishna Devaraya.

Krishnadevaraya who reigned for 20 years was the most illustrious rulers of the Tuluva dynasty. He brought the independent chieftains in the Tungabhadra river basin under his control. The Bahmani sultan, Mahmud Shah was kept in imprisonment by his minister. Krishnadevaraya freed the sultan and restored him to the throne. Similarly, he forced a war on Prataparudra, the Gajapati ruler of Odisha. Prataparudra negotiated for peace and offered to marry off his daughter. Accepting the offer Krishnadevaraya returned the territory he had conquered from Prataparudra. Krishnadevaraya, with the assistance of the Portuguese gunners, defeated the Sultan of Golconda and took over Raichur from the ruler of Bijapur.

A Great Builder : Krishnadevaraya built huge irrigation tanks and reservoirs for harvesting rainwater. He built the famous templeis of Krishnaswamy, Hazara Ramaswamy and Vithalaswamy in the capital city of Hampi. He distributed the wealth he gained in wars to all major temples of South India for the purpose of constructing temple gateways (gopura), called ‘Rayagopuram,’ in his honour.

He recruited a large army and built many strong forts. He imported large number of horses from Arabia and Iran, which came in ships to Vijayanagar ports on the west coast. He had good friendly relationship with the Portuguese and Arabian traders, which increased the Empire’s income through customs.

Patron of Literature, Art and Architecture : Krishnadevaraya patronised art and literature. Eight eminent luminaries in literature known as astadiggajas adorned his court. Alasani Peddana was the greatest of them all. Another notable figure was Tenali Ramakrishna. Krishnadeva Raya wrote Amuktamalyada, an epic in Telugu and also a Sanskrit drama Jambavciti Kalyanam.

Discuss the causes for the decline of Vijayanagar rule. To what extent the Bahmani sultans contributed to it?

Krishnadevaraya was succeeded by his younger brother Achtyudadeva Raya. After the uneventful reigns of Achtyudadeva Raya and his successor Venkata I, Sadashiva Raya, a minor, ascended the throne. His regent Rama Raya, the able general of the kingdom, continued as a de facto ruler, even after Sadashiva Raya attained the age for becoming the king. He relegated Sadashiva Raya to a nominal king. In the meantime, the sultans of Deccan kingdoms succeeded in forming a league to fight the Vijayanagar Empire. The combined forces of the enemies met at Talikota in 1565. In the ensuing battle, known as Rakasa Tangadi (Battle of Talikota), Vijayanagar was defeated. There was terrible human slaughter and pillaging of the capital city of Hampi. All the buildings, palaces and temples were destroyed. The beautiful carvings and sculptures were desecrated. The glorious Vijayanagar Empire had ceased to exist.

1. Highlight the boundaries of Vijayanagar Empire and Bahmani kingdom. 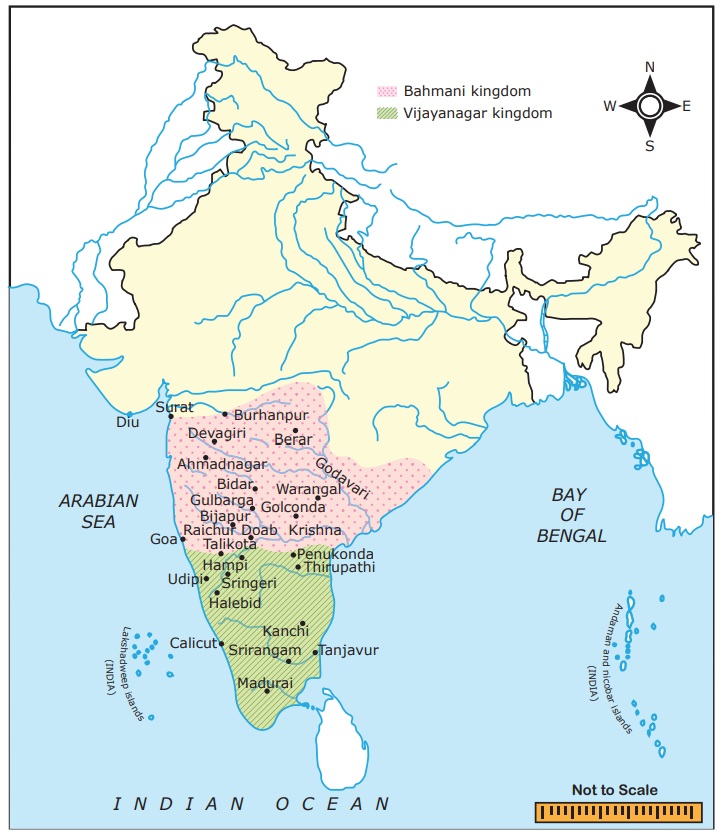 1. Name the kingdom ruled by 18 monarchs which lasted for nearly 180 years.

2. Name the Bahmani Sultan who was restored to the throne by Krishna Devaraya

3. Name the book written by Krishnadevaraya in Sanskrit.

4. Where did Hasan Bahman Shah shift his capital.

Collect information about temples in Tamil Nadu with the influence of Vijayanagara style of art and architecture. Also read the stories of Tenali Ramakrishna in the classroom.