Lime of various forms is a good substance for increasing the pH of acid water.

Examples of methods for pH adjustment

Lime of various forms is a good substance for increasing the pH of acid water. When adding lime (calcium carbonate (CaCO3)) to water with low pH the following process will take place, as mentioned earlier:

These reactions are part of the carbonate system, which is the most important contributor to the good buffering capacity of the water. What can be seen from the chemical equations is that when adding CaCO3 to water, CO23− ions will react with free H+ and reduce the amount, so increasing the pH.

Lime may be used in different forms, such as limestone or as limestone powder. Limestonepowder (CaCO3), with a particle size of less than 0.005 mm, may also be dissolved in water and create lime slurry (approximately 75% dry matter), which is much used for pH regulation. Lime slurry may be added in concentrated form to the water or as diluted (5–10 times in a mixing basin) lime slurry. 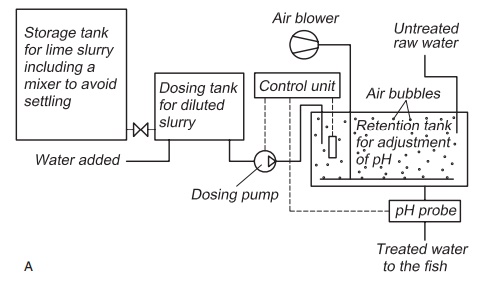 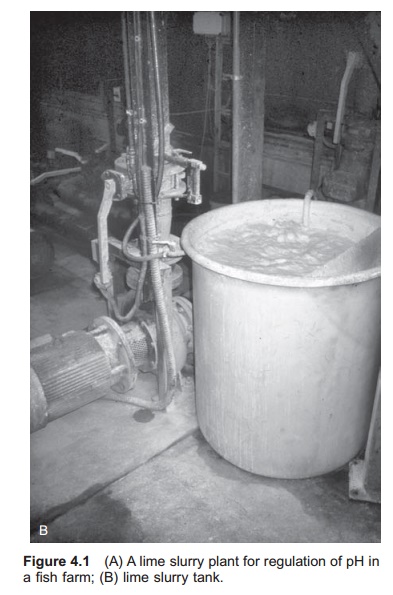 The container for storing the lime slurry must have an efficient mixing system to avoid settling out of the lime particles. Lime slurry is added with a dosage pump to a mixing basin where mixing of the slurry with the water where pH is to be regulated takes place (Fig. 4.1). Automatic pH control can be achieved by having a pH sensor in the mixing basin, the signals from which can be used to control the dosage pump and the amount of slurry added. In this way any variation in the quality of the incom-ing water can be registered and adjusted before the water reaches the fish tanks.

To ensure good mixing of the slurry with the water, a diffuser creating air bubbles can be used in the mixing basin. Use of lime slurry may increase the particles content (turbidity) of the water. This must be considered when using lime slurry on water for fry production.

A shell-sand filter or limestone filter represents a simpler system where the water has to pass through a layer of crushed limestone (particle size 1–3 mm) or shell sand.13As the water passes through the filter there will be an increase in pH. After using the filter for a period of time there will be a gradual drop in pH, because the amount of CO23− is reduced. To avoid these drops in pH several filters can be connected in parallel. This makes it possible to refill, clean or maintain a separate filter without stopping the whole system. When using such systems, a part flow of the water to be treated is sent over the limestone filter. The pH increases, and the water is sent back to the main water flow into the fish tanks. Care must, however, be taken to avoid possible mixing zones. If CO2 gas is added just before the limestone filter, the CO2 will increase the dissolution of the limestone. In this way, it is possi-ble to automatically control the pH by controlling the addition of CO2 gas before the filter. The reac-tion process in this filter can be described with the following equations:

A shell-sand well is a very simple and low cost system for regulating the pH (Fig. 4.2). The incom-ing water is forced to flow up through a layer of shell-sand and in so doing the pH of the water will increase. This method requires manual refilling with shell sand to keep the pH stable. 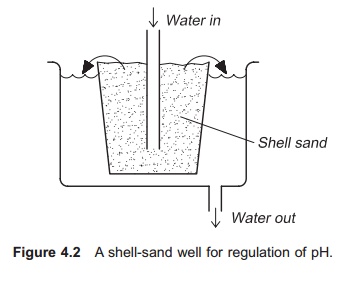 Seawater has a high buffering capacity and contains free carbonate ions (CO32−) and/or bicarbonate ions (HCO−3) which, similarly to limestone, will take up H+ ions and increase the pH. Addition of 2–4% seawater to freshwater will increase the pH and the buffering capacity; the conductivity of the water will also increase. Since measuring the conductivity is quite simple, this method can be used for con-trolling the addition of seawater. Also, the amount of seawater may be fixed manually depending on how much freshwater is used.

When using this method for pH regulation, it is important to consider that the seawater contains pathogenic micro-organisms, poisonous algae and other substances that may be harmful to the fish. A solution is to pump the seawater from large depths, where the amount of algae and micro-organisms is lower. Seawater pumped from groundwater wells may also be used. This water normally has a very low content of micro-organisms. It is generally recommended that seawater is disinfected before using it for neutralizing freshwater. The operator must also be aware of mixed zone problems.

Different types of lye, such as sodium hydroxide (NaOH), may be used for pH regulation, but special care must be taken before use in fish farming because it is quite easy to overdose, especially when the water quality varies. The result can be water having a pH that is too high, which is also toxic for the fish. Sodium hydroxide is strongly corrosive on metals and is not particularly friendly to work with. In solid form it is a white crystalloid non-odorous substance that is easily dissolved in water; the mixing process produces heat and steam. 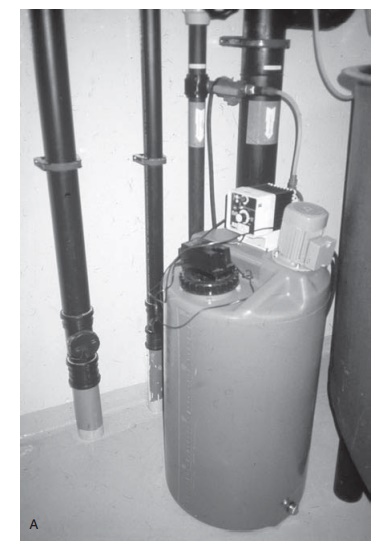 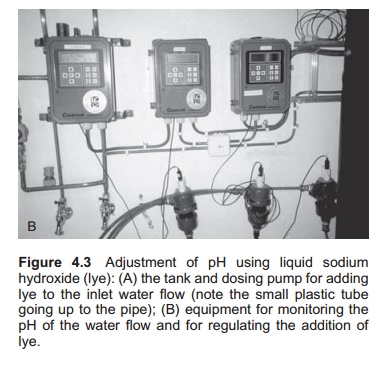 The reaction process when using sodium hydrox-ide is:

In water of low pH, the hydroxyl ions (OH−) will react with the free hydrogen ions (H+) and increase the pH of the water. The use of sodium hydroxide will, as seen from the chemical equation, only neu-tralize the water and not increase the buffering capacity; this is also a reason for preferring other methods. In water of low alkalinity either lye or hydroxides may be used.