Red tide-inducing phytoplankton produce many lipids containing highly unsat-urated fatty acids along with amino acids. Much carbohydrate is also released during the bloom.

Red tide-inducing phytoplankton produce many lipids containing highly unsat-urated fatty acids along with amino acids. Much carbohydrate is also released during the bloom. Decaying phytoplankton red tides sink slowly receiving het-erotrophic decomposition due to bacteria and deposit on the seabed. If waters are shallow with low temperatures, phytoplankton deposits remain intact and benthos can utilize them over long periods. Low temperature of bottom water will cause rapid decomposition, including dissolved oxygen deficiency and the generation of H2S. This situation will eventually damage the benthos.

Mass destruction of marine resources results from respiratory difficulty as evi-denced by mortality of yellowtail Seriola quinqueradiata due to Chatonellaantiqua red tide, and of whitefish Coregonus lavaretus due to Ceratium hirundinella bloom. Mass mortality of finfish and shellfish have occurred elic-ited by toxins produced by phytoflagellates and blue-green algae, notably brevetoxins by Ptychodiscus brevis and aphatoxin by Aphanizomenon fros-aqua blooms.

Phytoplankton that cause red tides affect distribution of heavy metals in ma-rine waters by ion exchange of metals bound to phytoplankton cells. Heavy metals so bound are deposited with phytoplankton on the seabed. Phytoplank-ton red tide may increase the concentrations of heavy metals like Cd and Fe by producing humic acid. The remarkable sea foam accompanied by unusually high concentrations of dissolved organic matter manifested surfactant produc-tion due to a Phaeocystis pouchetti red tide. Similar productions were observed by species of Ballariophyceae, Cryptophyceae, Haptophyceae andChlorophyceae. Association of Cu, Hg, and Pb with these surfactants was con-firmed. Antimicrobial compounds were demonstrated in Gonyaulaxtamarensis, which has a broad antimicrobial spectrum. Antimicrobial agentswere also found in Gyrodinium cohnii, but not in axenic culture.

Toxin-producing algae are becoming an increasingly serious problem in both aquaculture and fisheries populations. The severity of these blooms has ap-peared to increase in recent years. Likewise, the number of geographic loca-tions experiencing toxic algal blooms has also increased. Toxic algal blooms are worldwide problems affecting aquatic populations in both warm water and cold water environments. The great majority of the problems has occurred in near-coastal marine ecosystems and thus, may have the greatest potential im-pact on cage and net pen culture. They are also a threat to culturists obtaining water from sites prone to develop toxic algal blooms (e.g., land-based tank systems). In some cases, the introduction of toxic algae into a closed aquacul-ture system may result in devastating effects.

Increased eutrophication or nutrient enrichment has often been correlated with increased prevalence of many toxic algal blooms. But there appear to be other important risk factors besides simply increased nitrogen or phosphorous, which are essential for development of bloom. The problem of toxic algae is a cogent lesson on how the success of marine aquaculture is heavily dependent upon a healthy, balanced natural environment and that aquaculturists have a vested interest in assuring that the marine environment is not degraded.

Many different toxic algae have been implicated in fish kills, although in most cases the precise toxins or mechanisms of toxicity are unclear. Nonetheless, many different types of toxins have been isolated from various algae and many of these are ichthyotoxic. Neurotoxins are especially common. Clinical signs of algal neurotoxicity include disorientation, loss of equilibrium, and sporadic hyperactivity. Other algae mechanically obstruct or damage the gills of fishes, causing hypoxia.

Dinoflagellates represent the predominant toxin producing algae. Many di-noflagellates have been implicated or suspected in fish kills. The red tide di-noflagellate (Gymnodinium breve) causes mass mortalities of fish and inverte-brates in states bordering the Gulf of Mexico. Some dinoflagellate toxins are transferred up the food chain (e.g., Alexandrium) and have caused mortalities in wild fish (e.g., Atlantic herring Clupea harengus) that consume tainted zoop-lankton along the northwest Atlantic coast of the United States.

Other algal blooms associated with toxicity include the Prymnesium parvum, which causes mortality in brackishwater and marine pond fish (e.g., mullet Mugil spp.) in Europe and the Middle East. Diatoms of the genus Chaetoceros have been associated with mortality in seawater-cultured salmonids. The spines of other alga apparently cause it to become lodged on or in the gills. Diatoms may become embedded in gill tissue, inciting a foreign body reaction. Epithelial hyperplasia causes hypoxia. In some cases, hyperactive mucus pro-duction appears to be primarily responsible for the hypoxia. Other algae have been less commonly associated with ichthyotoxicity, although there is consid-erable speculation about possible sublethal effects.

The most well recognized economic impact of toxic algae is seafood contami-nation by their toxins (Table 11-2). This has caused major economic losses in shellfish, including cultured species. Other toxic algae are known to cause seri-ous illness in persons exposed to their toxins. Thus, the presence of toxic algae poses a serious threat to the future success of marine aquaculture, and there is a need to have intensified efforts to address these problems. 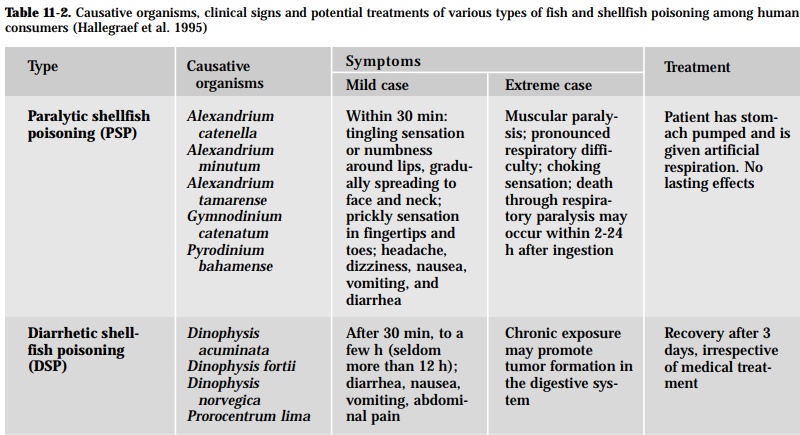 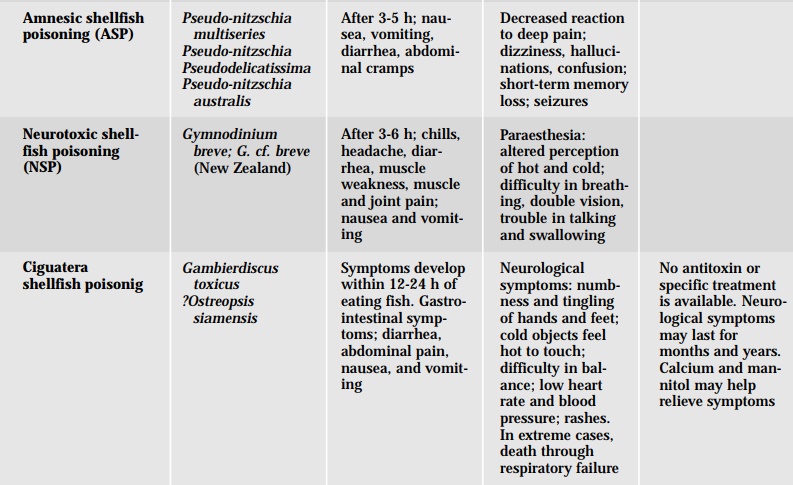 The price of fish and invertebrates has dropped as a result of red tide scare, particularly in the Philippines. Prices of fishes caught from other areas free from red tide contamination have also been affected by the red tide scare.