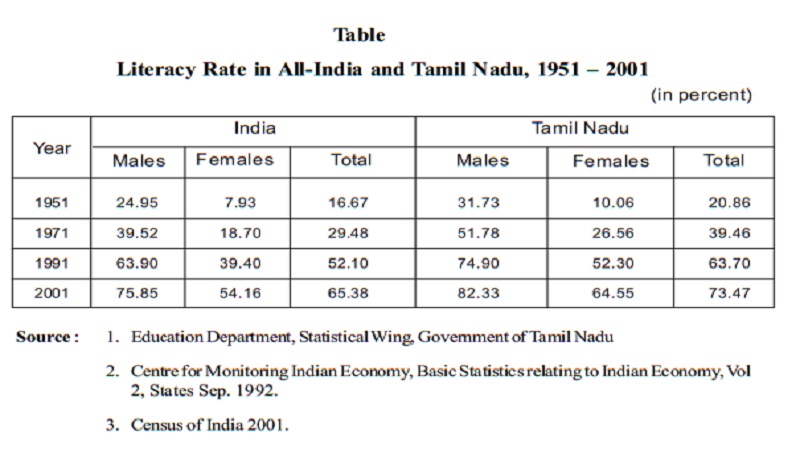 Tamil Nadu is an educationally progressive state in India. In literacy, it is one of the three top states and it is next only to Kerala and Maharashtra.

Tamil Nadu is an educationally progressive state in India. In literacy, it is one of the three top states and it is next only to Kerala and Maharashtra. The progress of education in Tamil Nadu in terms of literacy is given in Table. The literacy rates for both males and females are more than the national average. According to 2001 census, the overall literacy rate for Tamil Nadu was 73.47 as against the national average of 65.38 percent.

Between 1991 and 2001, the percentage of enrolment at the secondary level has increased from 13 percent to 59 percent.

There was a steady increase in educational expenditure in Tamil Nadu from 1962-63 to 2000 - 2001. During the period, the expenditure on education increased from Rs.26 crores to Rs.4949 crores. This is a remarkable increase.

The National Policy on Education (NPE) 1986 of the Government of India gave first priority to Universal Primary Education (UPE). The UPE goal aimed at achievement of Education for All (EPA) covering only classes I and V.

The main factors which influenced steady increase in enrolment of children in age group 6-11 years in Tamil Nadu are : (1) easy accessibility of schools ; (2) awareness among parents about the value of education ; 3) rising real per capita income ; (4) implementation of Chief Minister's Nutritious Noon Meal Scheme and 5) a number of inducements and concessions offered by the Government in the form of free supply of books, free bus passes and so on.

In recent years, there has been a decline in dropout rate. This has been made possible by many factors such as Chief Minister's Nutritious Noon Meal scheme, free health check ups, free education and other concessions like free bus passes, slates, books and uniforms.

District Primary Education Programme (DPEP) : The DPEP has been introduced with the object of achieving the goal of universal primary education. It focuses on reducing gender disparities in education.

Non-Formal Education and Adult Literacy : The measures taken by the Government of Tamil Nadu under adult education programme include :

All these measures come under Arivoli Iyakkam (Light of Knowledge movement). In this movement, an adult is defined as one in the age group 15-35.