DomainKeys Identified Mail (DKIM) is a specification for cryptographically signing e-mail messages, permitting a signing domain to claim responsibility for a message in the mail stream. Message recipients (or agents acting in their behalf) can verify the signature by querying the signer’s domain directly to retrieve the appropriate public key and thereby can confirm that the message was attested to by a party in posses- sion of the private key for the signing domain. DKIM is a proposed Internet Standard (RFC 4871: DomainKeys Identified Mail (DKIM) Signatures). DKIM has been widely adopted by a range of e-mail providers, including corporations, govern- ment agencies, gmail, yahoo, and many Internet Service Providers (ISPs).

This section provides an overview of DKIM. Before beginning our discussion of DKIM, we introduce the standard Internet mail architecture. Then we look at the threat that DKIM is intended to address, and finally provide an overview of DKIM operation.

To understand the operation of DKIM, it is useful to have a basic grasp of the Internet mail architecture, which is currently defined in [CROC09]. This subsection provides an overview of the basic concepts.

At its most fundamental level, the Internet mail architecture consists of a user world in the form of Message User Agents (MUA), and the transfer world, in the form of the Message Handling Service (MHS), which is composed of Message Transfer Agents (MTA). The MHS accepts a message from one user and delivers it to one or more other users, creating a virtual MUA-to-MUA exchange environ- ment. This architecture involves three types of interoperability. One is directly between users: messages must be formatted by the MUA on behalf of the message author so that the message can be displayed to the message recipient by the destina- tion MUA. There are also interoperability requirements between the MUA and the MHS—first when a message is posted from an MUA to the MHS and later when it is delivered from the MHS to the destination MUA. Interoperability is required among the MTA components along the transfer path through the MHS.

Figure 18.9 illustrates the key components of the Internet mail architecture, which include the following.

•                           Message User Agent (MUA): Works on behalf of user actors and user applica- tions. It is their representative within the e-mail service. Typically, this function is housed in the user’s computer and is referred to as a client e-mail program or a local network e-mail server. The author MUA formats a message and performs initial submission into the MHS via a MSA. The recipient MUA processes received mail for storage and/or display to the recipient user.

•                           Mail Submission Agent (MSA): Accepts the message submitted by an MUA and enforces the policies of the hosting domain and the requirements of Internet standards. This function may be located together with the MUA or as a separate functional model. In the latter case, the Simple Mail Transfer Protocol (SMTP) is used between the MUA and the MSA.

•                           Message Transfer Agent (MTA): Relays mail for one application-level hop. It is like a packet switch or IP router in that its job is to make routing assess- ments and to move the message closer to the recipients. Relaying is performed by a sequence of MTAs until the message reaches a destination MDA. An MTA also adds trace information to the message header. SMTP is used between MTAs and between an MTA and an MSA or MDA. 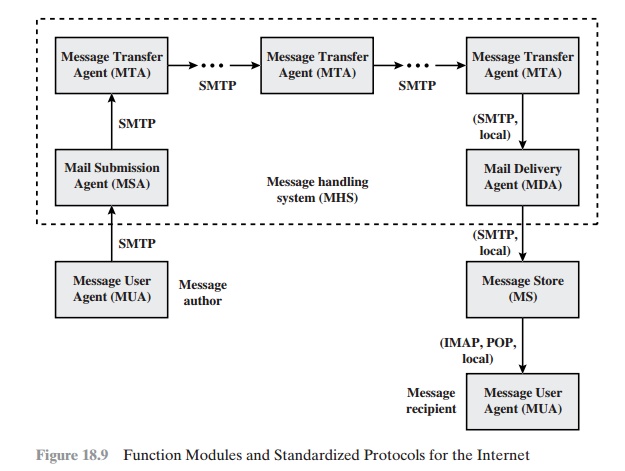 Two other concepts need to be defined. An administrative management domain (ADMD) is an Internet e-mail provider. Examples include a department that operates a local mail relay (MTA), an IT department that operates an enterprise mail relay, and an ISP that operates a public shared e-mail service. Each ADMD can have different operating policies and trust-based decision making. One obvious example is the distinction between mail that is exchanged within an organization and mail that is exchanged between independent organizations. The rules for handling the two types of traffic tend to be quite different.

The Domain Name System (DNS) is a directory lookup service that provides a mapping between the name of a host on the Internet and its numerical address.

RFC 4684 (Analysis of Threats Motivating DomainKeys Identified Mail) describes the threats being addressed by DKIM in terms of the characteristics, capabilities, and location of potential attackers.

CHARACTERISTICS RFC characterizes the range of attackers on a spectrum of three levels of threat.

At the low end are attackers who simply want to send e-mail that a recipient does not want to receive. The attacker can use one of a number of commercially available tools that allow the sender to falsify the origin address of messages. This makes it difficult for the receiver to filter spam on the basis of originating address or domain.

1.                                       At the next level are professional senders of bulk spam mail. These attackers often operate as commercial enterprises and send messages on behalf of third parties. They employ more comprehensive tools for attack, including Mail Transfer Agents (MTAs) and registered domains and networks of compromised computers (zombies) to send messages and (in some cases) to harvest addresses to which to send.

2.                                       The most sophisticated and financially motivated senders of messages are those who stand to receive substantial financial benefit, such as from an e-mail-based fraud scheme. These attackers can be expected to employ all of the above mechanisms and additionally may attack the Internet infrastructure itself, including DNS cache-poisoning attacks and IP routing attacks.

CAPABILITIES RFC 4686 lists the following as capabilities that an attacker might have.

LOCATION DKIM focuses primarily on attackers located outside of the administrative units of the claimed originator and the recipient.These administrative units frequently correspond to the protected portions of the network adjacent to the originator and recipient. It is in this area that the trust relationships required for authenticated message submission do not exist and do not scale adequately to be practical. Conversely, within these administrative units, there are other mechanisms (such as authenticated message submission) that are easier to deploy and more likely to be used than DKIM. External “bad actors” are usually attempting to exploit the “any- to-any” nature of e-mail that motivates most recipient MTAs to accept messages from anywhere for delivery to their local domain. They may generate messages without signatures, with incorrect signatures, or with correct signatures from domains with little traceability. They may also pose as mailing lists, greeting cards, or other agents that legitimately send or resend messages on behalf of others.

DKIM is designed to provide an e-mail authentication technique that is transparent to the end user. In essence, a user’s e-mail message is signed by a private key of the administrative domain from which the e-mail originates. The signature covers all of the content of the message and some of the RFC 5322 message headers. At the receiving end, the MDA can access the corresponding public key via a DNS and ver- ify the signature, thus authenticating that the message comes from the claimed administrative domain. Thus, mail that originates from somewhere else but claims to come from a given domain will not pass the authentication test and can be rejected. This approach differs from that of S/MIME and PGP, which use the originator’s pri- vate key to sign the content of the message. The motivation for DKIM is based on the following reasoning.5

Figure 18.10 is a simple example of the operation of DKIM. We begin with a message generated by a user and transmitted into the MHS to an MSA that is within the users administrative domain. An e-mail message is generated by an e-mail client program. The content of the message, plus selected RFC 5322 headers, is signed by the e-mail provider using the provider’s private key. The signer is associated with a domain, which could be a corporate local network, an ISP, or a public e-mail facility such as gmail. The signed message then passes through the Internet via a sequence of MTAs. At the destination, the MDA retrieves the public key for the incoming signature and verifies the signature before passing the message on to the destination e-mail client. The default signing algorithm is RSA with SHA-256. RSA with SHA-1 also may be used.

Figure 18.11 provides a more detailed look at the elements of DKIM operation. Basic message processing is divided between a signing Administrative Management Domain (ADMD) and a verifying ADMD. At its simplest, this is between the 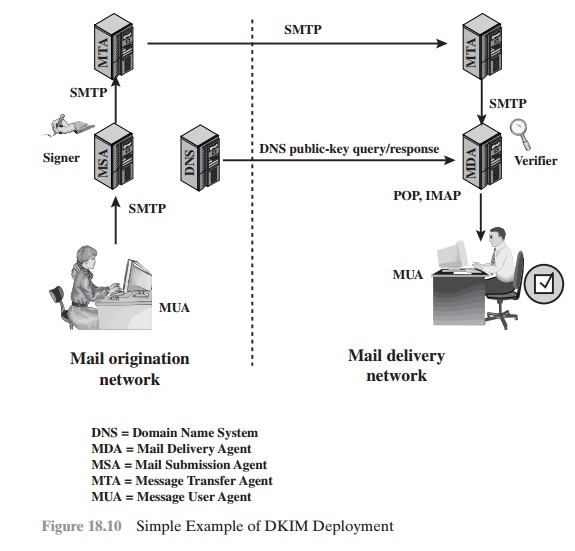 originating ADMD and the delivering ADMD, but it can involve other ADMDs in the handling path.

Signing is performed by an authorized module within the signing ADMD and uses private information from a Key Store. Within the originating ADMD, this might be performed by the MUA, MSA, or an MTA. Verifying is performed by an authorized module within the verifying ADMD. Within a delivering ADMD, verify- ing might be performed by an MTA, MDA, or MUA. The module verifies the signa- ture or determines whether a particular signature was required. Verifying the signa- ture uses public information from the Key Store. If the signature passes, reputation information is used to assess the signer and that information is passed to the mes- sage filtering system. If the signature fails or there is no signature using the author’s domain, information about signing practices related to the author can be retrieved remotely and/or locally, and that information is passed to the message filtering sys- tem. For example, if the sender (e.g., gmail) uses DKIM but no DKIM signature is present, then the message may be considered fraudulent.

The signature is inserted into the RFC 5322 message as an additional header entry, starting with the keyword Dkim-Signature. You can view examples from your own incoming mail by using the View Long Headers (or similar wording) option for an incoming message. Here is an example: Before a message is signed, a process known as canonicalization is per- formed on both the header and body of the RFC 5322 message. Canonicalization is necessary to deal with the possibility of minor changes in the message made en route, including character encoding, treatment of trailing white space in message lines, and the “folding” and “unfolding” of header lines. The intent of canonical- ization is to make a minimal transformation of the message (for the purpose of signing; the message itself is not changed, so the canonicalization must be per- formed again by the verifier) that will give it its best chance of producing the same canonical value at the receiving end. DKIM defines two header canonical- ization algorithms (“simple” and “relaxed”) and two for the body (with the same names). The simple algorithm tolerates almost no modification, while the relaxed tolerates common modifications.

The signature includes a number of fields. Each field begins with a tag consist- ing of a tag code followed by an equals sign and ends with a semicolon. The fields include the following: