Decision tables provide a systematic way of stating complex business rules, which is useful for developers as well as for testers.

Decision tables can be used in test design whether or not they are used in specifications, as they help testers explore the effects of combinations of different inputs and other software states that must correctly implement business rules.

leave out is also important. If you do not have a systematic way of selecting combinations, an arbitrary subset will be used and this may well result in an ineffective test effort.

Actions that result from a given set of conditions

Find the data attribute each condition tests and all of the attribute's values.

Determine each independent action to be taken for the decision or policy.

Multiply the number of values for each condition data attribute by each other.

Fill in the values of the condition data attributes in each numbered rule column.

Define Actions for each Rule:

For each rule, mark the appropriate actions with an X in the decision table.

Simplify the Table Eliminate and/or consolidate rules to reduce the number of columns.

Repayment amount has been entered:

Term of loan has been Entered:

Next we will identify all of the combinations of True and False. With two conditions, each of which can be true or false, we will have four combinations (two to the power of the number of things to be combined). Note that if we have three things to combine, we will have eight combinations, with four things, there are 16, etc. This is why it is good to tackle small sets of combinations at a time. In order to keep track of which combinations we have, we will alternate True and False on the bottom row, put two True‘s and then two Falses on the row above the bottom row, etc., so the top row will have all True‘s and then all Falses (and this principle applies to all such tables).

In the next step we will now identify the correct outcome for each combination. In this example, we can enter one or both of the two fields. Each combination is sometimes referred to as a rule.

At this point, we may realize that we hadn‘t thought about what happens if the customer doesn‘t enter anything in either of the two fields. The table has highlighted a combination that was not mentioned in the specification for this example. We could assume that this combination should result in an error message, so we need to add another action. This highlights the strength of this technique to discover omissions and ambiguities in specifications. It is not unusual for some combinations to be omitted from specifications; therefore this is also a valuable technique to use when reviewing the test basis. 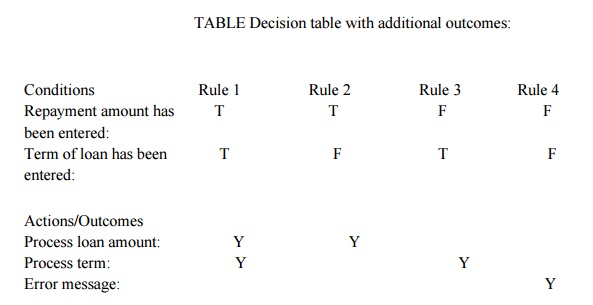 Now, we make slight change in this example, so that the customer is not allowed to enter both repayment and term. Now the outcome of our table will change, because there should also be an error message if both are entered.

You might notice now that there is only one ‗Yes‘ in each column, i.e. our actions are mutually exclusive – only one action occurs for each combination of conditions. We could represent this in a different way by listing the actions in the cell of one row. Note that if more than one action results from any of the combinations, then it would be better to show them as separate rows rather than combining them into one row.