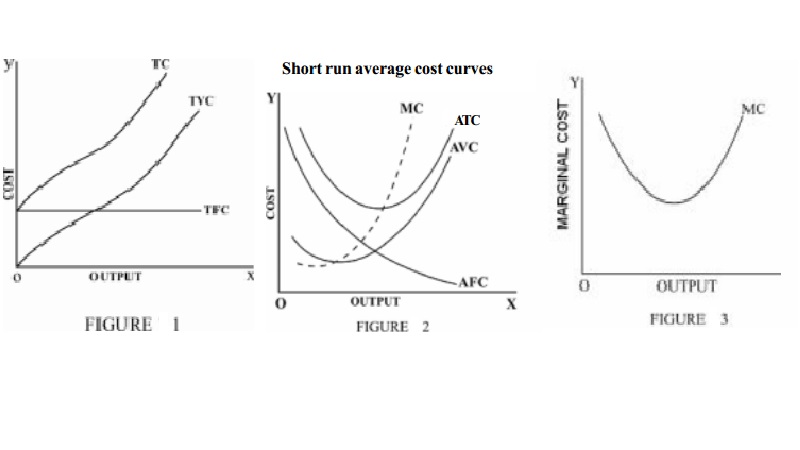 Money cost or nominal cost is the total money expenses incurred by a firm in producing a commodity.

2.     Wages and salaries of labour
3.     Expenditure on machinery and equipment

4.     Depreciation on machines, buildings and such other capital goods

7.     Normal profit of the entrepreneur.

Real cost is a subjective concept. It expresses the pains and sacrifices involved in producing a commodity. The money paid for securing the factors of productions is money cost whereas the efforts and sacrifice made by the capitalists to save and invest, by the workers in foregoing leisure and by the landlords constitute real costs.

Accounting costs or explicit costs are the payments made by the entrepreneur to the suppliers of various productive factors. The accounting costs are only those costs, which are directly paid out or accounted for by the producer i.e. wages to the labourers employed, prices for the raw materials purchased, fuel and power used, rent for the building hired for the production work, the rate of interest on the borrowed capital and the taxes paid.

It may be pointed out that the firm will earn economic profits only if it is making revenue in excess of economic cost.

Private cost is the cost incurred by a firm for production. It includes both implicit costs and explicit costs.

Social costs are those costs, which are not borne by the producing firm but are incurred by others in society. For example, when an oil refinery discharges its waste in the river causing water pollution, such a pollution results in tremendous health hazards which involve costs to the society as a whole

Fixed cost and variable cost are helpful in understanding the behaviour of costs over different levels of output.

Meaning of Fixed and Variable factors and costs

Fixed and variable factors are with reference to short run production function.

Fixed costs are those which are independent of output, that is, they do not change with changes in output. These costs are a 'fixed' amount, which must be incurred by a firm in the short run whether the output is small or large. E.g. contractual rent, interest on capital invested, salaries to the permanent staff, insurance premia and certain taxes.

Variable costs are those costs, which are incurred on the employment of variable factors of production whose amount can be altered in the short run. Thus the total variable costs change with the level of output. It rises when output expands and falls when output contracts. When output is nil, variable cost becomes zero. These costs include payments such as wages of labour employed, prices of raw materials, fuel and power used and the transport costs.

It should be noted that total fixed cost is the same irrespective of the level of output. Therefore a change in total cost is influenced by the change in variable cost only.

The relationship between total fixed cost, total variable cost and total cost will be clear from the Figure.

The average fixed cost is the fixed cost per unit of output. It is obtained by dividing the total fixed cost by the number of units of the commodity produced.

Average Total Cost or Average Cost : Average total cost is simply called average cost which is the total cost divided by the number of units of output produced.

The average cost is also known as the unit cost since it is the cost per unit of output produced. The following figure shows the shape of AFC, AVC and ATC in the short period.

From the figure , it can be understood that the behaviour of the average total cost curve depends on the behaviour of AFC and AVC curves. In the beginning, both AFC and AVC fall. So ATC curve falls. When AVC curve begins rising, AFC curve falls steeply ie fall in AFC is more than the rise in AVC. So ATC curve continues to fall. But as output increases further, there is a sharp increase in AVC, which is more than the fall in AFC. Hence ATC curve rises after a point. The ATC curve like AVC curve falls first, reaches the minimum value and then rises. Hence it has taken a U shape.

Marginal cost is defined as the addition made to the total cost by the production of one additional unit of output.

The marginal cost curve is given below