CAD is the function of computer systems to support in the creation, modification, analysis, or optimization of a design. 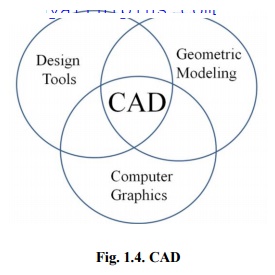 CAD software for design uses either vector-based graphics to explain the objects of traditional drafting, or may also develop raster graphics showing the overall look of designed objects. During the manual drafting of engineering drawings, the output of CAD must convey information, like dimensions, materials, processes, and tolerances.

CAD is a significant industrial art used in many purposes, including industrial and architectural design, shipbuilding, automotive, and aerospace industries, and many more. CAD is also extensively used to create computer animation for special effects in movies, and technical manuals, frequently called as Digital Content Creation.

CAD software packages provide the designer with a multi window environment with animation which is regularly used in Digital Content Creation. The animations using wire frame modeling helps the designer to see into the interior of object and to observe the behaviors of the inner components of the assembly during the motion.

Initially       software  for  CAD  systems  was  developed  with  computer  languages  such

as  FORTRAN but with the development of  object-oriented programming methods this has completely changed. Classic modern parametric attribute based modeler  and freeform surface systems are developing around a number of key  ‘C’modules.

A CAD system can be seen as develop from the interaction of a  Graphical User Interface (GUI) with  NURBS geometry and Boundary representation data through a kernel for  geometric modeling. A geometry constraint engine may also be employed to organize the associative relationships between

components in an assembly.

selected according to specific requirements.

Currently, no special hardware is required for CAD software. However, some special CAD systems can do graphically and computationally intensive tasks, so a higher end  graphics card, high speed CPUs may be suggested. CAD systems exist for all the major platforms and some packages even

digitizing graphics tablet. Handling of the view of the part on the screen is also sometimes done with the help of a Space mouse or Space Ball. Special CAD systems also support stereoscopic glasses for  viewing the 3D objects.

The CAD tools are mainly using for graphics applications and modeling. Aids such a color, grids, geometric modifiers and group facilitate structural geometric models. Visualization is achieved through shaded components and animation which focus design conceptualization, communication and interference detection. FEM packages provide optimization in shape and structure. Adding tolerances, tolerance analysis and investigating the effect of manufacturing on the design can perform by utilizing CAD tools (Table 1.2). 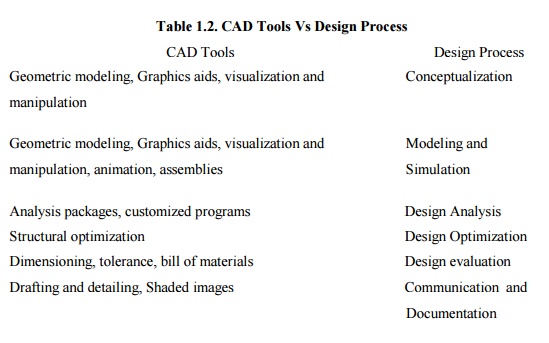 CAD is one of the tools used by designers and engineers and is used in different ways depending on the profession of the customer and the type of software.

CAD is one of the Digital Product Development activities within the  Product Lifecycle  Management practices with other tools, which are either integrated modules or individual, such as:

CAD is also used for the development of photo simulations that are frequently necessary in the preparation of Environmental Impact Reports, in which proposed CAD buildings are superimposed into photographs of existing situation to represent what that conditions will be like, where the proposed services are allowed to be built.

Parameters and constraints can be used to get the size, shape, and other properties of the modeling elements. The features of the CAD system can be used for the several tools for measurement such as yield strength, tensile strength and electrical or electro-magnetic properties.

In CAD, Computer architecture is a set of disciplines that explains the functionality, the organization and the introduction of computer systems; that is, it describes the capabilities of a computer and its programming method in a summary way, and how the internal organization of the system is designed and executed to meet the specified facilities. Computer architecture engages different aspects, including instruction set architecture design, logic design, and implementation. The implementation includes Integrated Circuit Design, Power, and Cooling. Optimization of the design needs expertise with Compilers, Operating Systems and Packaging.

An instruction set architecture is the interface between the software and hardware and also can be observed as the programmer's view of the machine. Computers do not understand high level languages, if any, language elements that translate directly into a machine's native op codes.