There are six main components in hydrologic cycle. They are: 1) Evapotranspiration, 2) Condensation, 3) Precipitation, 4) Infiltration, 5) Percolation, and 6) Runoff.

There are six main components in hydrologic cycle. They are: 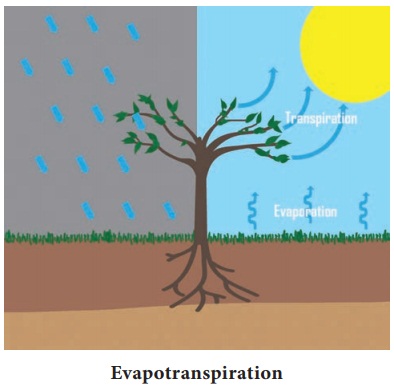 Evaporation refers to the process in which the liquid form of water changes into gaseous form. Water boils at 100°C (212°F) temperature but, it actually begins to evaporate at 0°C (32°F); and the process takes place very slowly. Temperature is the prime element which affects the rate of evaporation. There is a positive relationship between these two variables. Areal extent of surface water, wind and the atmospheric humidity are the other variables which affect the rate of evaporation.

The atmosphere gets nearly 90% of moisture from the oceans, seas, lakes and rivers through evaporation and 10% of the moisture from plants through transpiration.

On a global scale, the amount of water gets evaporated is about the same as the amount of water delivered to earth as precipitation. This process varies geographically, as the evaporation is more prevalent over the oceans than precipitation, while over the land, precipitation routinely exceeds evaporation. The rate of evaporation is low during the periods of calm winds than during windy times. When the air is calm, evaporated water tends to stay close to the water body. During windy, the water vapour is driven away and is replaced by dry air which facilitates additional evaporation.

The rate of evaporation increases with

• Decrease in humidity and

It refers to the process in which the gaseous form of water changes into liquid form. Condensation generally occurs in the atmosphere when warm air rises, cools and loses its capacity to hold water vapour. As a result, excess water vapour condenses to form cloud droplets. Condensation is responsible for the formation of clouds. These clouds produce precipitation which is the primary route for water to return to the earth’s surface in the water cycle. Condensation is the opposite of evaporation.

Dew, frost, fog, mist and clouds are the different forms of condensation.

a. Dew: It is a water droplet formed by the condensation of water vapour on a relatively cold surface of an object. It forms when the temperature of an object drops below the dew point temperature.

b. Frost: The ice crystals formed by deposition of water vapour on a relatively cold surface of an object is known as frost. It forms when the temperature of an object drops below the freezing point of temperature.

c. Fog: Fog is the suspended tiny water droplets or ice crystals in an air layer next to the earth's surface that reduces the visibility to 1,000 m or lower. For aviation purposes, the criterion for fog is 10 km or less.

d. Mist: Mist is the tiny droplets of water hanging in the air. These droplets form when the water vapour in the air is rapidly cooled, causing it to change from invisible gas to tiny visible water droplets. Mist is less dense than fog.

e. Clouds: Clouds consist of tiny water droplets/ice particles which are so small and light in weight. Clouds are formed by microscopic drops of water or by small ice crystals. The size of the droplets generally range from a couple of microns to 100 microns. When the size of the water droplets exceeds 100 microns, it becomes rain drops.

• Condensation occurs when the air get saturated.

• Saturation occurs when the temperature drops down.

Precipitation refers to all forms of water that fall from clouds and reaches the earth’s surface. For the occurrence of precipitation, cloud droplets or ice crystals must grow heavy enough to fall through the air. When the droplets grow large in size, they tend to fall. While moving down, by collecting some small droplets, they become heavy enough to fall out of the cloud as raindrops.

Freezing Rain: Some times raindrops falling through cold air near the ground do not freeze in the air. Instead, the raindrops freeze when they touch a cold surface. This is called freezing rain and the drops of water are usually greater than 0.5 mm in diameter.

Hail: The precipitation which consists of round pellets of ice which are larger than 5 in diameter is called hail or hailstones. Hail forms only in cumulonimbus clouds during thunderstorms. A hailstone starts as an ice pellet inside a cold region of a cloud. Strong updrafts in the cloud carry the hailstone up and down through the cold region many times.

Snow: Often water vapour in a cloud is converted directly into snow pieces due to lowering of temperature. It appears like a powdery mass of ice. The precipitation in the form of powdery mass of ice is known as snowfall. It is common in the polar and high mountainous regions. 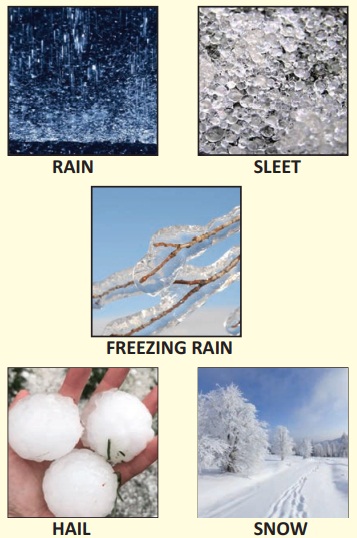 Water entering the soil at the surface of the ground is termed as infiltration. Infiltration allows the soil temporarily to store water, making it available for plants use and organisms in the soil. Infiltration is an important process where rain water soaks into the ground, through the soil and underlying rock layers. Some of this water ultimately returns to the surface through springs or low spots down hills. Some of the water remains underground and is called groundwater. The rate of infiltration is influenced by the physical characteristics of the soil, vegetative cover, moisture content of the soil, soil temperature and rainfall intensity. The terms infiltration and percolation are often used interchangeably. 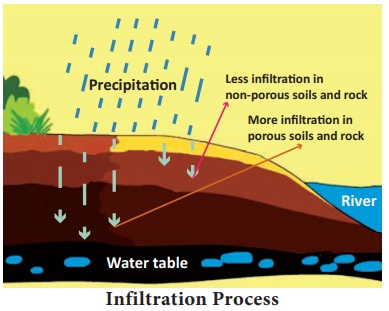 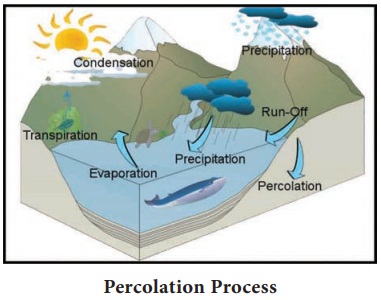 Runoff is the water that is pulled by gravity across land’s surface. It replenishes groundwater and surface water as it percolates into an aquifer (it is an underground layer of water-bearing rock) or moves into a river, stream or watershed. It comes from unabsorbed water from rain, snowmelt, irrigation or other sources, comprising a significant element in the water cycle as well as the water supply when it drains into a watershed.

Runoff is also a major contributor to the erosion which carves out canyons, gorges and related landforms. The rate of runoff that can happen depends on the amount of rainfall, porosity of soil, vegetation and slope. Only about 35% of precipitation ends up in the sea or ocean and the other 65% is absorbed into the soil. 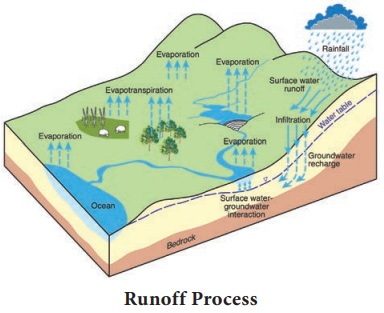 Based on the time interval between the instance of rainfall and generation of runoff, the runoff may be classified into following three types

i. Surface Runoff: It is the portion of rainfall, which enters the stream immediately after the rainfall. It occurs, when the rainfall is longer, heavier and exceeds the rate of infiltration. In this condition the excess water makes a head over the ground surface, which tends to move from one place to another following land gradient and is known as overland flow. When the overland flow joins the streams, channels or oceans, it is termed as surface runoff or surface flow.

ii. Sub-Surface Runoff: The water that has entered the subsoil and moves laterally without joining the water-table to the streams, rivers or oceans is known as sub- surface runoff. The sub-surface runoff is usually referred as interflow.

iii. Base Flow: It is a flow of underground water from a saturated ground water zone to a water channel. It usually appears at a downstream location where the channel elevation is lower than the groundwater table. Groundwater provides the stream flow during dry periods of small or no precipitation.

Units of the Measurement pertaining to Hydrology