We shall now try to classify changes on the basis of certain similarities and differences. * slow and fast * reversible and irreversible * physical and chemical changes * desirable and undesirable * natural and man – made

We shall now try to classify changes on the basis of certain similarities and differences.

* natural and man – made

Activity 2: Look at the pictures and discuss about the duration for the changes to take place 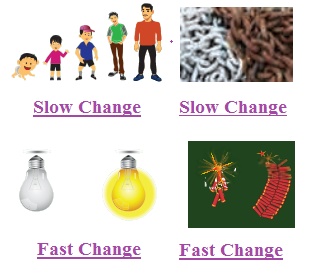 Changes which take place over a long period of time ( hours / days / months / years ) are known as Slow changes.

Examples: growth of nail and hair, change of seasons, germination of seed.

Changes which take place within a short period of time (seconds or minutes) are known as fast changes.

Changes which can be reversed (to get back the original state) are known as reversible changes.

Examples: Touch me not plant (Responding to touch), stretching of rubber band, melting of ice.

Activity 3: Try to make a boat and an aeroplane one by one using the same piece of paper. This means the change of shape discussed here is reversible. 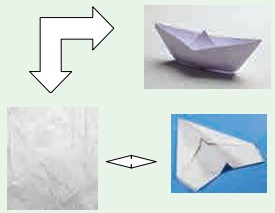 Changes which cannot be reversed or to get back the original state are known as Irreversible changes.

What kind of changes are they?

a) Burning of a candle.

b) Piercing a balloon with a pin.

Examples : Change of milk into curd, digestion of food, making idly from batter. 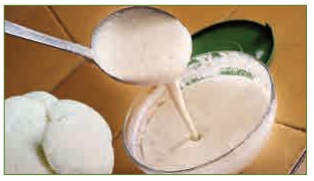 Activity 5: Take an apple and cut it into two halves. Cut one half into pieces and share it with your friends. Is there any change in the composition of the Apple while cutting?

No, only the shape and size have changed. This can be called a physical change.

Leave the other half on the table for some time. You can see brown patches formed on the cut surface because of the reaction between some substances in the apple and the air around it. This is a Chemical change.

Physical changes are the temporary changes in which there is change in the physical appearance of the substance but not in its chemical composition. Here no new substance is formed.

Example: Melting of ice, the solution of salt or sugar, stretching of rubber band.

Let us now understand the physical changes that take place in water. You already know that water exists in three states as solid, liquid and gas. Change of state takes place either by heating or cooling. By heating energy is supplied and by cooling energy is taken away. These are the reasons for the changes.

Let us name a few processes connected with the changes in states of water. 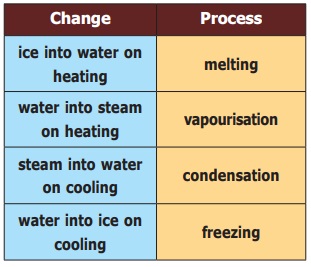 The change of state from solid to gas directly is called Sublimation.

The spreading of the solid particles (broken into individual molecules) among the liquid molecules is called as dissolution.

* Solvent is a substance that dissolves the solute.

* Solute is a substance that is dissolved in a solvent to make a solution.

* When solute is dissolved in a solvent it forms a solution.

Water is known as the universal solvent. It dissolves a wide range of substance.

Activity 6: Take half a cup of water, add one spoon full of sugar and stir well.

a. What do you observe? Both of them mix and form a solution.

b. What happened to the sugar? The sugar gets dissolved in water.

c. Where is it gone? It is in the water in dissolved state.

d. The solute in the above solution is sugar.

e. The solvent in the above solution is sugar.

f. Have you seen a glass of water and a glass of sugar solution looking alike? Yes

Chemical changes are the permanent changes in which there is change in the chemical composition and new substance is formed.

Examples: Burning of wood, Popping of popcorn, Blackening of silver ornaments, and Rusting of iron. 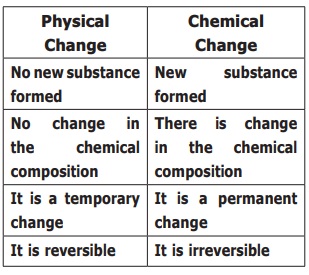 Activity 7: Look at the pictures and write whether they are Physical or Chemical changes. 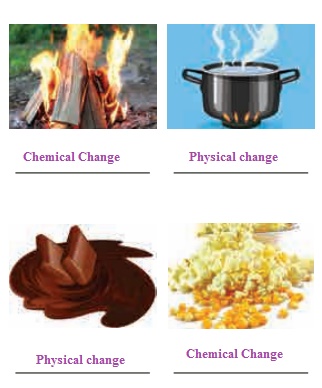 Activity 8: Look at the pictures and write whether they are desirable or undesirable changes. 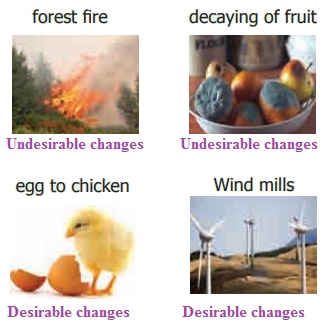 The changes which are useful, not harmful to our environment and desired by us are known as desirable changes.

The changes which are harmful to our environment and not desired by us are known as Undesirable changes.

5. Natural and human made changes

Activity 9: Identify the type of changes 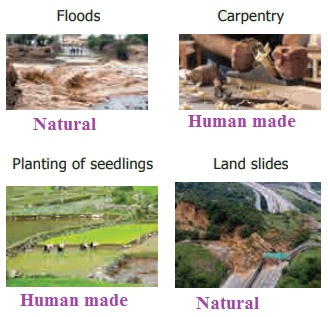 Changes which take place in nature on their own and are beyond the control of human beings are known as Natural changes.

Examples: Rotation of the earth, Changing phases of the Moon, Rain.

Human made or artificial changes

The changes which are brought about by human beings are known as human made or artificial changes. They will not happen on their own.