Chapter: Obstetrics and Gynecology: The Obstetrician-Gynecologist’s Role in Screening and Preventive Care

Infection caused by Chlamydia trachomatis is the most commonly reported bacterial STD in the United States.

Infection caused by Chlamydia trachomatis is the most commonly reported bacterial STD in the United States. Over one million cases were reported to the CDC in 2006, and it is estimated that another 1.7 million cases go un-diagnosed. If untreated, chlamydia can cause significant long-term complications, including infertility, ectopic pregnancy, and chronic pelvic pain. Diagnosing chlamy-dia promptly is necessary to prevent these complications. Sexually active women 25 years of age and younger should re-ceive annual screening for chlamydia. Asymptomatic women aged 26 and older who are at high risk for infection should be routinely screened. Nucleic acid amplification tests (NAATs)of endocervical swab specimens can identify infection in asymptomatic women with high specificity and sensitivity. NAATs of vaginal swabs and urine samples have compa-rable sensitivity and specificity.

Of the estimated 700,000 new cases of gonorrhea annu-ally, less than half are reported. Infection can be symp-tomatic with cervicitis and vaginal discharge, or it may be asymptomatic. Gonorrhea may lead to pelvic inflam-matory disease, which is associated with long-term mor-bidity due to chronic pelvic pain, ectopic pregnancy, and infertility.

ACOG recommends screening of women based on risk factors. Asymptomatic women aged 26 and older should receive routine screening if they are at high risk for infection. All sexu-ally active adolescents should also be routinely screened. Screening can be done by cervical cultures or by newer techniques such as NAATs and nucleic acid hybridization tests that have better sensitivity with comparable specificity.

Syphilis is not a common disease in the United States,but the rate has increased over the last few years. Almost 10,000 cases were diagnosed in 2006, which translates into a rate of 1 case of primary or secondary syphilis per 100,000 women.

Syphilis is a systemic disease caused by the bacteria Treponema pallidum. If untreated, syphilis may progressfrom a primary infection characterized by a painless ulcer (chancre), to secondary and tertiary infections. Signs and symptoms of secondary infection include skin manifesta-tions and lymphadenopathy; tertiary infection may cause cardiac or ophthalmic manifestations, auditory abnormal-ities, or gummatous lesions. Serologic tests may be nega-tive in the early stages of infection.

ACOG recommends annual syphilis screening for women at increased risk (see Box 2.3). All pregnant women shouldbe serologically screened as early as possible in pregnancy and again at delivery. Due to the possibility of a false-negative result in early stages of infection, patients who are considered at high risk or who are from areas of high prevalence should be retested at the beginning of the third trimester. 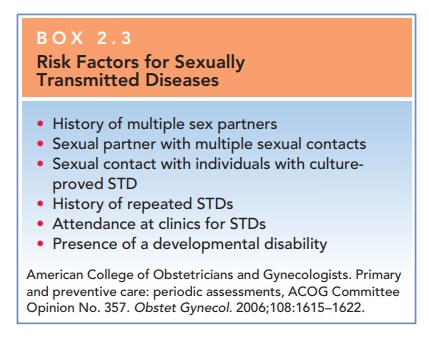