The central nervous system (CNS) is completely surrounded by the cerebrospinal fluid (CSF), which also fills the inner cavities of the brain, the ventricles. We therefore distinguish between internal and external cerebrospinal fluid spaces. They communi-cate with each other in the region of theInternal Cerebrospinal Fluid Spaces (A – C)The ventricular system consists of four ven-tricles, namely, the two lateral ventricles (A1) of the telencephalon, the third ventricle (A – C2) of the diencephalon, and the fourth ventricle (A – C3) of the rhombencephalon (pons and medulla oblongata). The two lateral ventricles are connected with the third ventricle by the interventricular foramen(foramen of Monro) (AC4) located on each side in front of the thalamus. The third ven-tricle, in turn, communicates with the fourth ventricle through a narrow channel, the cerebral aqueduct (aqueduct of Sylvius) (A – C5).

Owing to the rotation of the hemispheres the lateral ventricle has a semi-circular configuration with a caudally directed spur. We distinguish the following parts:

The anterior horn, frontal horn (BC6), in the frontal lobe is bordered laterally by the head of the caudate nucleus, medially by the septum pellucidum, and dorsally by the corpus callosum

The narrow central part (BC7) above the thalamus

The inferior horn, temporal horn (BC8), in the temporal lobe

The posterior horn, occipital horn (BC9), in the occipital lobe

The lateral wall of the third ventricle is formed by the thalamus with the inter-thalamic adhesion (C10) and the hypothalamus. The optic recess (C11) and the infundibular recess (C12) project ros-trally, and the suprapineal recess (C13) and the pineal recess (C14) do so caudally.

The fourthventricle creates a tent-shaped space above the rhomboid fossa between cerebellum and medulla oblongata; on both sides, it sends out a long lateral recess (BC15). At the end of each lateral recess is the lateral aperture of the fourth ventricleforamen of Luschka, foramen of Key and Retzius). At the attachment of the inferior medullary velum lies the median aperture (foramen of Magendie). 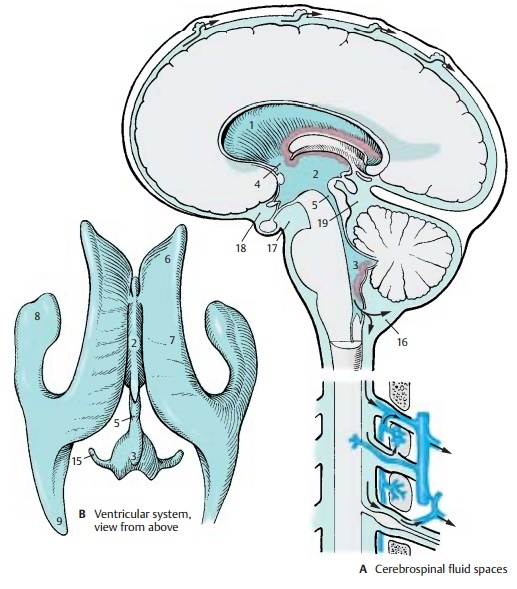 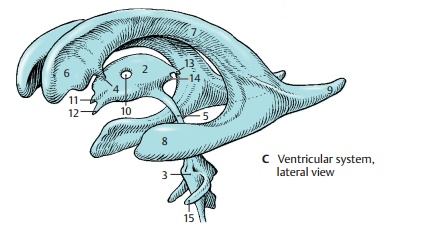 The external cerebrospinal fluid space lies between the two layers of the leptome-ninges. It is delimited on the inside by the pia mater and on the outside by the arachnoidea mater (subarachnoid space or cavity; p. 288, A13). The space is narrow over the convexity of the hemispheres and widens only in several areas at the base of the brain to form cisterns. Whereas the pia mater adheres closely to the surface of the CNS, the arachnoidea spans across sulci and fossae; in regions of deep indentations this arrangement creates larger spaces filled with CSF, the subarachnoid cisterns. The largest space is the cerebellomedullary cis-tern (A16) between cerebellum and medullaoblongata. In the corner formed by dien-cephalic floor, cerebral peduncles and pons lies the interpeduncular cistern (A17), and the chiasmatic cistern (A18) lies in front of it near the optic chiasm. The cerebellar sur-face, quadrigeminal plate, and pineal gland delimit the cisterna ambiens (A19), which is traversed by a loose network of connective tissue.

Circulation of Cerebrospinal Fluid (A)

The cerebrospinal fluid is produced by the choroid plexus. It flows from thelateral ventricles into the third ventricle, and from there through the aqueduct into the fourth ventricle. Here it passes through the median and lateral apertures into the external cerebrospinal fluid space. Drainage of CSF into the venous circulation takes place partly in the arachnoid granulations  that protrude into the venous sinuses or lateral lacunae, and partly at theexits of the spinal nerves where the fluid en-ters into the dense venous plexuses and into the nerve sheaths (drainage into the lym Thieme phatic circulation).