Carcinogenesis is a multistep process, and development of all human cancersappears to require the accumulation of multiple genetic changes.

Carcinogenesis is a multistep process, and development of all human cancersappears to require the accumulation of multiple genetic changes. These changes can involve either inherited germline mutations or acquired mutations. Once a sin-gle severely mutated cell forms, monoclonal expansion of the cell’s line can cause a tumor. Most important mutations in tumorogenesis involve growth promoting genes (proto-oncogenes), growth inhibiting tumor suppressor genes, or the genes regulating apoptosis and senescence.

Activation of growth promoting oncogenes.Proto-oncogenes are normal cellulargenes involved with growth and cellular differentiation. Oncogenes are derived from proto-oncogenes by either a change in the gene sequence, resulting in a new gene product (oncoprotein), or a loss of gene regulation resulting in overexpression of the normal gene product. Mechanisms of oncogene activation include point muta-tions, chromosomal translocations, gene amplification, and insertional mutagenesis. Activated oncogenes lack regulatory control and are overexpressed, resulting in unregulated cellular proliferation. 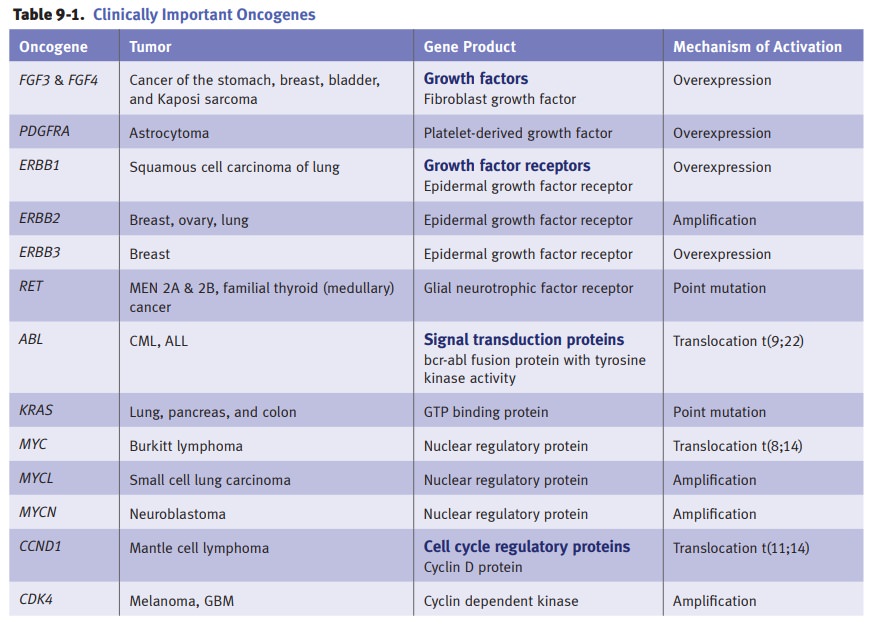 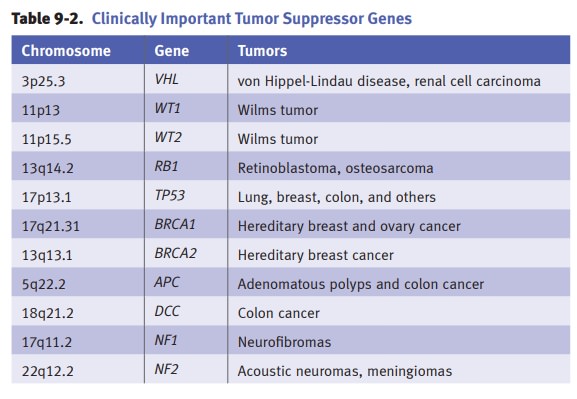 Regulation of apoptosis.Tumor genesis related to changes in regulation of apotosisoccurs in the follicular lymphomas that have the translocation t(14;18). Normally, Bcl-2 prevents apoptosis (programmed cell death). In the follicular lymphomas with this translocation, the Bcl-2 regulator of apoptosis is overexpressed, because the translocation connects the immunoglobulin heavy chain gene on chromosome 14 (which turns on easily in B lymphocytes) to the BCL2 gene on chromosome 18, thereby leading to a situation in which lymphocytes fail to die as expected and instead produce a tumor.

Limitless replication is possible due in part to upregulation of telomerase.

Sustained angiogenesis is possible due in part to activation of the Notch signalingpathway.

Invasiveness/metastasis. Malignant cells must dissociate from tumors (loss ofE-cadherin function) and degrade the extracellular matrix before spreading to dis-tant sites. Cancer-associated glycans are being investigated for their role in cancer spread and as targets for therapy.