3 Solution of One Dimensional Heat Equation

4 Solution of One Dimensional Wave Equation

The solution of a differential equation of second order of the form F (x, y, y’ , y’’ )   0 contains two arbitrary constants. These constants are determined by means of two conditions. The conditions on y and y’or their combination are prescribed at two different values of x are called boundary conditions.

The differential equation together with the boundary conditions is called a boundary value problem.

In this chapter ,we consider the finite difference method of solving linear boundary value problems of the form. 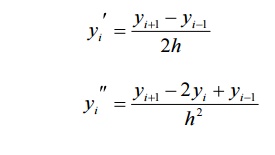 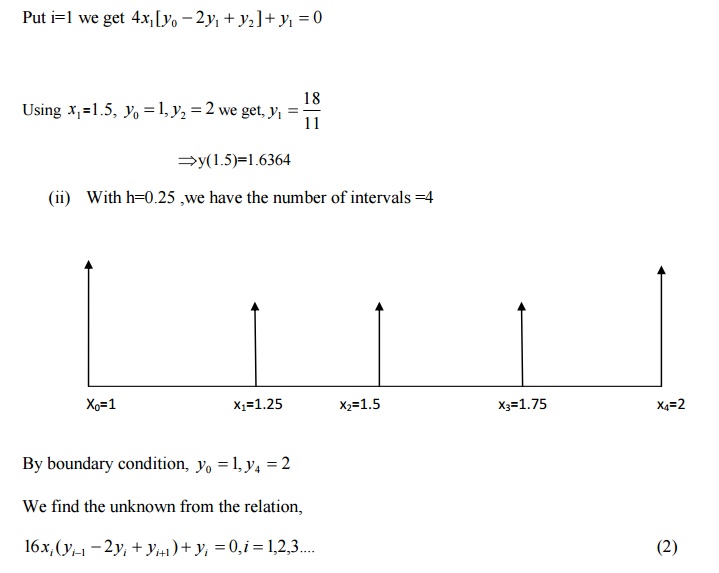 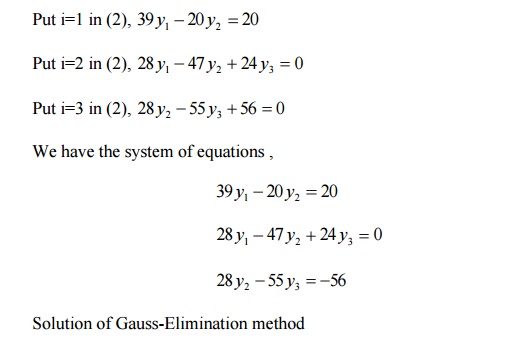 Partial differential equations with boundary conditions can be solved in a region by replacing the partial derivative by their finite difference approximations. The finite difference approximations to partial derivatives at a point (xi,yi) are given below. The xy-plane is  divided into a network of rectangle of  lengh   ∆x= h and breadth  ∆y=k   by drawing the lines x=ih and y=jk, parallel to x and y axes.The points of intersection of these lines are called grid points or mesh points or lattics points.The grid points ( xi , y j ) is denoted by (i,j) and is surrounded by the neighbouring grid points (i-1,j),(i+1,j),(i,j-1),(i,j+1) etc.,

The most general linear P.D.E of second order can be written as

Where A,B,C,D,E,F are in general functions of x and y.

The equation (1) is said to be 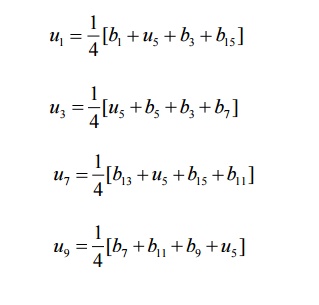 Finally we compute u2 ,u4 ,u6 ,u8  by using standard five point formula. 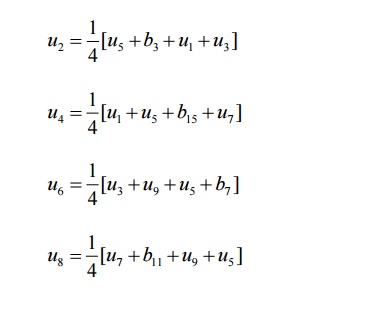 The use of Gauss-seidel iteration method to solve the system of equations obtained by finite difference method is called Leibmann’s method.

Let u1 , u2 ……u9 be the values of u at the interior mesh points of the given region.By symmetry about the lines AB and the line CD,we observe 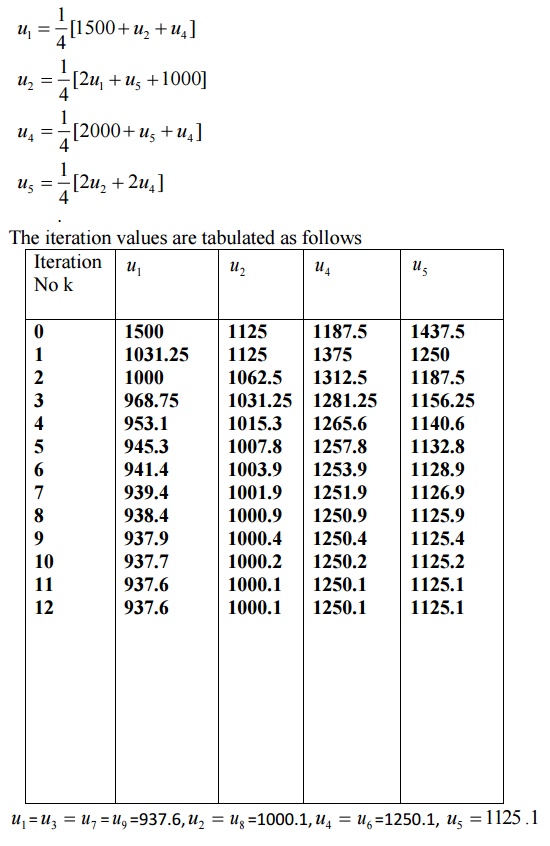 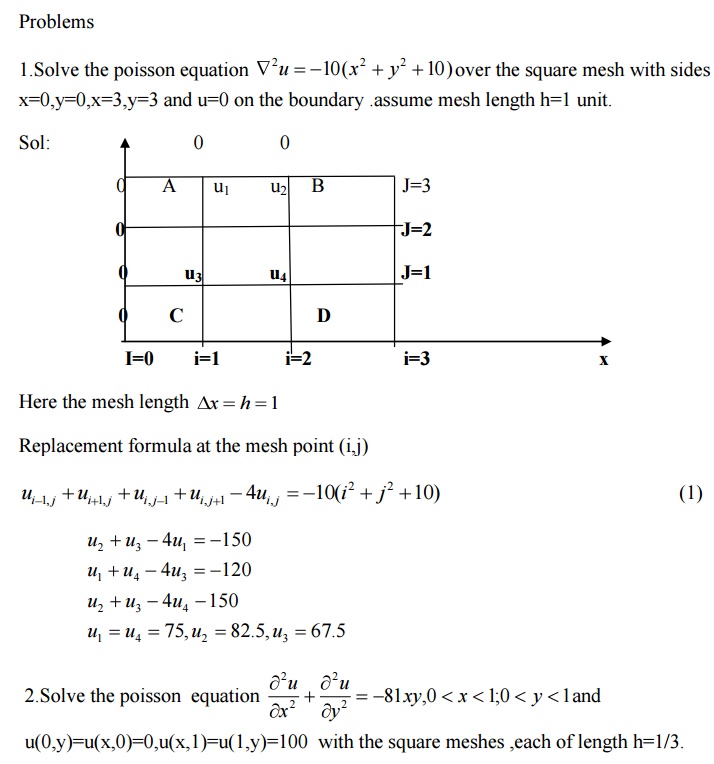 3 Solution of One dimensional heat equation

In this session, we will discuss the finite difference solution of one dimensional heat flow equation by Explicit and implicit method

This formula is called Bender-Schmidt formula.

This expression is called Crank-Nicholson’s implicit scheme. We note that Crank Nicholson’s scheme converges for all values of λ

The use of the above simplest scheme is given below. 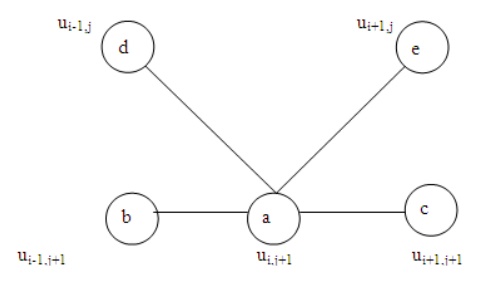 In this scheme, the values of u at a time step are obtained by solving a system of linear equations in the unknowns ui.

For applying eqn(1) ,we choose 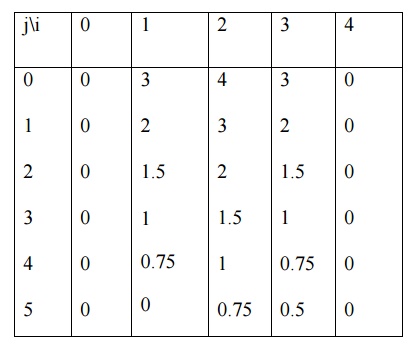 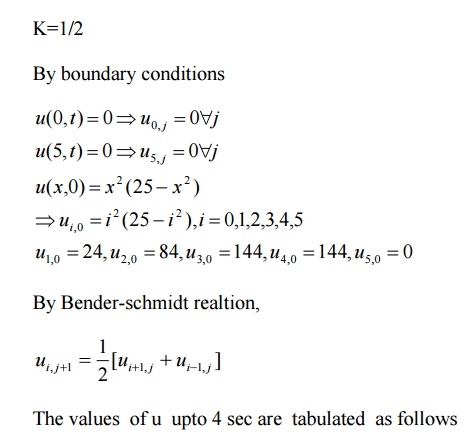 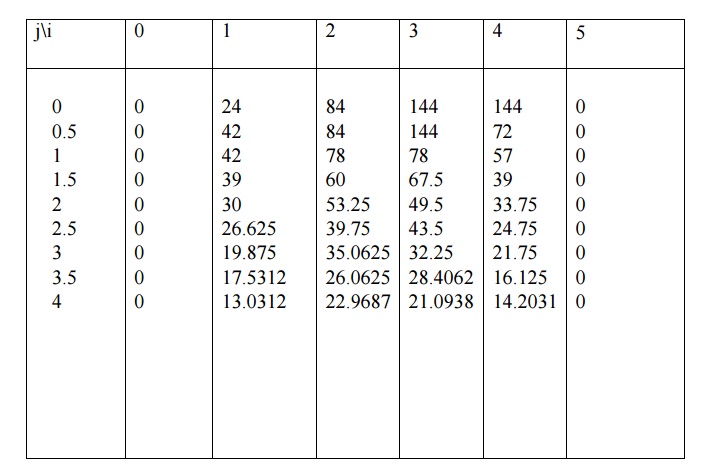 4 Solution of One dimensional wave equation

1.What is the error for solving Laplace and Poisson’s equations by finite difference method?

3. Why is Crank  Nicholson’s scheme called an implicit scheme?

The Schematic representation of crank Nicholson method is shown below.

The solution value at any point (i,j+1) on the (j +1)th level is dependent on the solution values at the neighboring points on the same level and on three values on the j th level. Hence it is an implicit method.

4. What are the methods to solve second order boundary-value problems?

5. What is the classification of one dimensional heat flow equation.

One dimensional heat flow equation is

Hence the one dimensional heat flow equation is parabolic.

x and k is the space in the time direction).

8. State the condition for the equation to be

(i) elliptic,(ii)parabolic(iii)hyperbolic when A,B,C are functions of x and y

9. Write a note on the stability and convergence of the solution of the difference

equation corresponding to the hyperbolic equation    .

For λ<  ,the solution is stable but not convergent.

10.  State the explicit scheme formula for the solution of the wave equation.

The formula to solve numerically the wave equation =0 is

The schematic representation is shown below.