Mood episodes are discrete periods of altered feeling, thought and behavior. Typically they have a distinct onset and offset, be-ginning over days or weeks and eventually ending gradually after several weeks or months. Manic–depressive disorder is defined by the occurrence of depressive plus manic, hypomanic, or mixed episodes, or the occurrence of only manic or mixed episodes. The diagnostic decision tree for manic–depressive disorder is given in Figure 47.1. 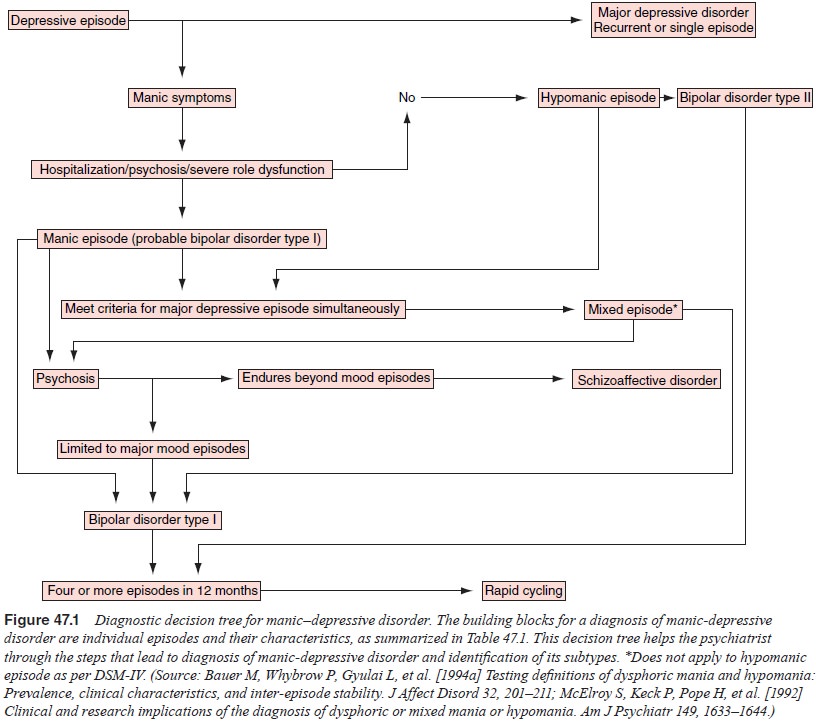 It is important to note that the phenomenologic differentia-tion between hypomania and mania is not as cut-and-dried. Of the three characteristics by which one is “promoted” from hypoma-nia to mania, only the presence of psychosis is firmly grounded in the characteristics of the individual. The other two character-istics, marked social or occupational role impairment or hospi-talization, clearly have components that are primarily external to the individual. If, for instance, one individual has relatively mild manic symptoms but is living with a family who is unable to tol-erate the behavior, she/he is more likely to be hospitalized. Simi-larly, the comorbid presence of a severe disorder is more likely to result in hospitalization and a “promotion” from type II to type I disorder. Contrarily, limited insurance benefits, or a more toler-ant family increase the probability that a manic syndrome of a given severity will be managed without hospitalization and thus be diagnosed as “hypomania” rather than “mania”.