Although the diagnosis of manic–depressive disorder is made on the basis of phenomenology, there are several reasons to con-duct a thorough medical history and physical examination.

Although the diagnosis of manic–depressive disorder is made on the basis of phenomenology, there are several reasons to con-duct a thorough medical history and physical examination. First, there are several general medical or substance-related causes of manic depression that, if treated, may lead to the resolution of the mood episode. Similarly, mania may be the first sign of a general medical illness that will be progressive and serious in its own right. Secondly, medical evaluation is necessary before starting medications used in the treatment of manic–depressive disorder. Finally, for many patients with psychiatric illnesses, particularly chronic or severe illnesses, their first contact with medical care as an adult is during the psychiatric interview, often under inpa-tient or even involuntary conditions. Because psychiatric illness is clearly not protective against medical illnesses, and since even common general medical illnesses may never have been screened for in the past, a thorough medical history and physical examina-tion are necessary parts of the basic care of patients.

The overall approach to evaluating persons with manic– depressive disorder for medical problems may be generalized asfollows: persons with psychiatric disorders, including manic– depressive disorder, should have regular screening for disease detection and health maintenance purposes as recommended for the general population. However, it should also be kept in mind that individuals with manic–depressive disorder, by virtue of having an often severe and disabling behavioral disorder, are less likely than the general population to have had adequate medical screening and treatment. Thus, special care must be made to en-sure that health problems are not overlooked and that appropriate treatment or referral is effected. Unfortunately, it is the exception rather than the rule to have well-integrated medical and mental health systems so that the mental health provider can assume that some effort will need to be expended to ensure adequate care is delivered for individuals with manic–depressive disorder.

Which general medical illnesses may cause symptoms of manic–depressive disorder? Most medical illnesses that affect brain function have been described in case reports or small case series to cause one or another psychiatric syndrome. Several gen-eral medical illnesses have been associated with the development of manic–depressive disorder (Table 47.2) although none can be considered specific risk factors. Administration of medications has been observed frequently in clinical practice to be associated with the onset of mania, particularly in patients with preexisting depression. Such medications are listed in Table 47.3. 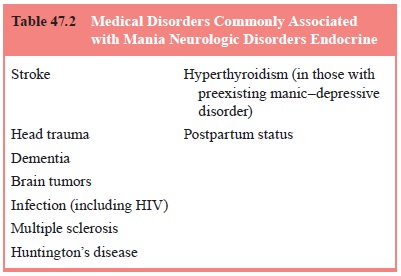 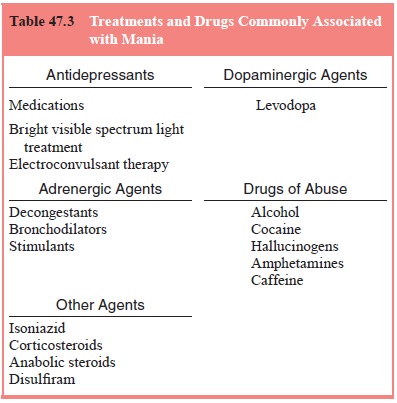 Some controversies have been hotly debated, particularly regarding the role of antidepressants in causing mania and rapid cycling. Of particular importance to psychiatric practice, all ef-ficacious antidepressant treatments have been suspected to cause the induction of mania, with the exception of lithium and the pos-sible exception of psychotherapy. This caveat for antidepressants also includes nonpharmacological antidepressants such as light and electroconvulsive therapy (ECT). The latter effect is para-doxical, as ECT is also used successfully to treat mania