Antagonists of the Renin–Angiotensin System

A summary of the agents that inhibit the renin– angiotensin system and their sites of action is provided in Figure 18.3.

ANTAGONISTS OF THE RENIN–ANGIOTENSIN SYSTEM

A summary of the agents that inhibit the renin– angiotensin system and their sites of action is provided in Figure 18.3. 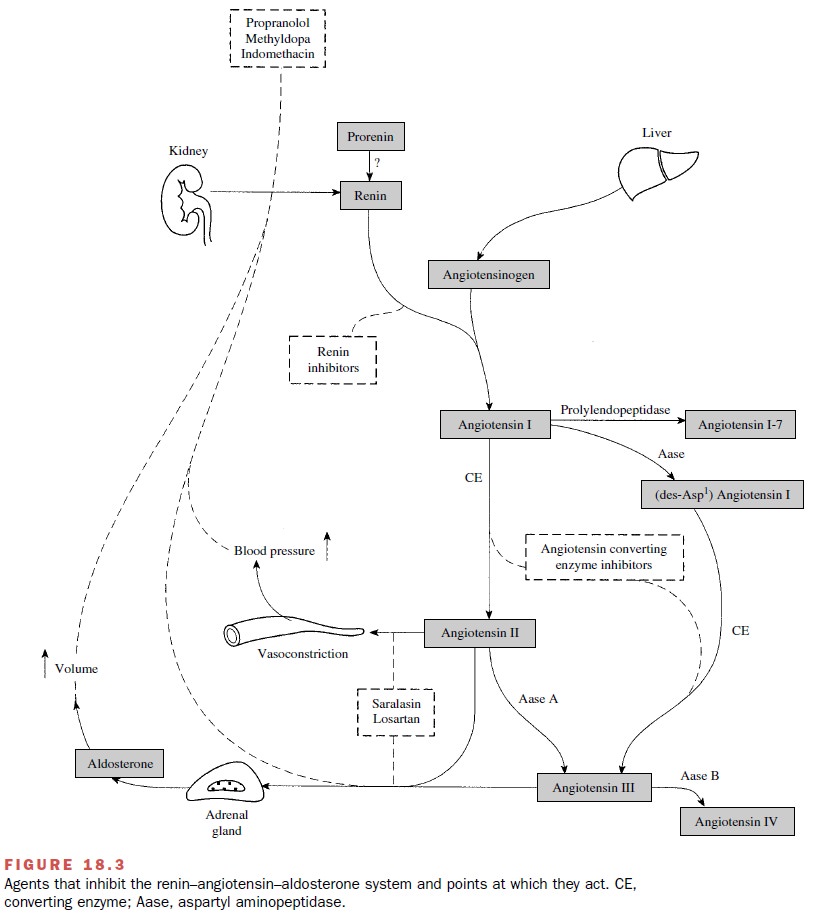 The acid protease inhibitor pepstatin and some ana-logues of angiotensinogen can competitively inhibit the formation of angiotensin I by human renin. Highly spe-cific renin inhibitors may prove beneficial as antihyper-tensive agents or in the treatment of congestive heart failure. Despite extensive efforts to develop renin in-hibitors, most compounds capable of inhibiting renin are large peptidelike molecules that lack adequate physical chemical properties to permit oral absorption.

Many of the orally active ACE inhibitors are prodrugs. These include perindopril, quinapril, benazepril, ramipril, enalapril, trandolapril, and fosinopril.

Captopril (Capoten) is an orally effective ACE inhibitor with a sulfhydryl moiety that is used in binding to the active site of the enzyme. Captopril blocks the blood pressure responses caused by the administration of an-giotensin I and decreases plasma and tissue levels of an-giotensin II.

Treatment with captopril reduces blood pressure in patients with renovascular disease and in patients with essential hypertension. The decrease in arterial pressure is related to a reduction in total peripheral resistance. Most studies demonstrate a good correlation between the hypotensive effect of inhibitors and the degree of blockade of the renin–angiotensin system. Many of the pharmacological effects of captopril are attributable to the inhibition of angiotensin II synthesis. However, ACE is a relatively nonselective enzyme that also ca-tabolizes a family of kinins to inactive products (Fig. 18.4). Bradykinin, one of the major kinins, acts as a va-sodilator through mechanisms related to the production of nitric oxide and prostacyclin by the vascular en-dothelium. Thus, administration of the ACE inhibitor captopril not only inhibits angiotensin II production but also prevents the breakdown of bradykinin. Increases in bradykinin concentrations after administration of ACE inhibitors contribute to the therapeutic efficacy of these compounds in the treatment of hypertension and con-gestive heart failure. However, alterations in bradykinin concentrations are also thought to contribute to cough and angioedema sometimes seen after ACE inhibition. 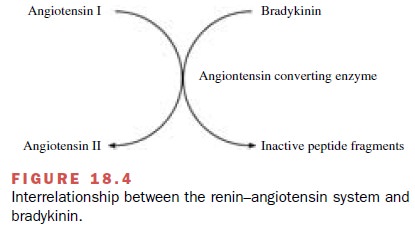 The hypotensive response to captopril is accompa-nied by a fall in plasma aldosterone and angiotensin II levels and an increase in plasma renin activity. Serum potassium levels are not affected unless potassium sup-plements or potassium-sparing diuretics are used con-comitantly; this can result in severe hyperkalemia.

There is no baroreflex-associated increase in heart rate, cardiac output, or myocardial contractility in response to the decrease in pressure, presumably because capto-pril decreases the sensitivity of the baroreceptor reflex.

Captopril enhances cardiac output in patients with congestive heart failure by inducing a reduction in ven-tricular afterload and preload. Converting enzyme in-hibitors have been shown to decrease the mass and wall thickness of the left ventricle in both normal and hy-pertrophied myocardium. ACE inhibitors lack meta-bolic side effects and do not alter serum lipids.

The onset of action following oral administration of captopril is about 15 minutes, with peak blood levels achieved in 30 to 60 minutes. Its apparent biological half-life is approximately 2 hours, with its antihyperten-sive effects observed for 6 to 10 hours. The kidneys ap-pear to play a major role in the inactivation of captopril.

Captopril, as well as other ACE inhibitors, is indi-cated in the treatment of hypertension, congestive heart failure, left ventricular dysfunction after a myocardial infarction, and diabetic nephropathy. In the treatment of essential hypertension, captopril is considered first-choice therapy, either alone or in combination with a thiazide diuretic. Decreases in blood pressure are pri-marily attributed to decreased total peripheral resist-ance or afterload. An advantage of combining captopril therapy with a conventional thiazide diuretic is that the thiazide-induced hypokalemia is minimized in the pres-ence of ACE inhibition, since there is a marked de-crease in angiotensin II–induced aldosterone release.

In the treatment of diabetic nephropathy associated with type I insulin-dependent diabetes mellitus, capto-pril decreases the rate of progression of renal insuffi-ciency and retards the worsening of renal function.

Approximately 10% of the patients treated with captopril report a dose-related maculopapular rash that often disappears when the dosage of captopril is reduced. Other common adverse effects are fever, a persistent dry cough (incidence as high as 39%), initial dose hypotension, and a loss of taste that may result in anorexia. These effects are reversed when drug ther-apy is discontinued. More serious toxicities include a 1% incidence of proteinuria and glomerulonephritis; less common are leukopenia and agranulocytosis. Since food reduces the bioavailability of captopril by 30 to 40%, administration of the drug an hour before meals is recommended. All converting enzyme in-hibitors are contraindicated in patients with bilateral renal artery disease or with unilateral renal artery dis-ease and one kidney. Use under these circumstances may result in renal failure or paradoxical malignant hypertension.

Most orally effective inhibitors of peptidyl dipeptide hydrolase are prodrug ester compounds that must be hydrolyzed in plasma to the active moiety before be-coming effective. These drugs include benazepril (Lotensin), enalapril (Vasotec), fosinopril (Monopril), moexipril (Univasc), quinapril (Accupril), perindopril (Aceon), and ramipril (Altace). The ester group pro-motes absorption of the compound from the gastroin-testinal tract. In contrast to captopril, the recommended dosing interval for these prodrug compounds is once to twice daily. These compounds are otherwise generally similar to captopril in their mechanism of action and in-dicated uses.

All prodrug ACE inhibitors are indicated for use as first-choice agents in the treatment of hypertension and congestive heart failure. In addition, results from clini-cal trials demonstrate that ramipril, a prodrug ACE in-hibitor, can reduce the rate of death, myocardial infarc-tion, and stroke in a broad range of high-risk patients who did not have heart failure. These results suggest that ACE inhibitors may be useful in the management of ischemia and atherosclerosis.

While essentially all ACE inhibitors have a similar mechanism of action and therefore exhibit similar effi-cacy in the treatment of hypertension and congestive heart failure, these drugs differ slightly in their phar-macokinetic profiles. Enalapril, lisinopril, and quinapril are excreted primarily by the kidney, with minimal liver metabolism, while the other prodrug compounds are metabolized by the liver and renally excreted. Thus, in patients with renal insufficiency, the half-life of renally excreted ACE inhibitors is pro-longed. In addition, patients with impaired liver func- tion may have a compromised ability to convert pro-drug to the active drug moiety, so the efficacy of the compounds may be reduced. In addition, compounds dependent on liver metabolism for elimination may exhibit an increase in plasma half-life. An additional property that distinguishes among these prodrugs is their individual abilities to bind tightly to tissue ACE, as opposed to the circulating form of the enzyme. Of the prodrug inhibitors, quinapril and perindopril bind most tightly.

All ACE inhibitors are contraindicated during preg-nancy. Their administration to pregnant women during the second and third trimesters of pregnancy has been associated with fetal and neonatal injury, including fetal death. A summary of the ACE inhibitors and their properties is provided in Table 18.1. 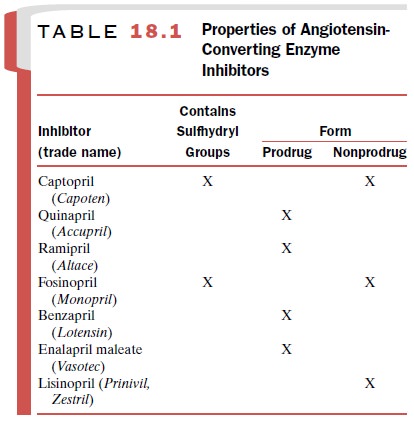 Angiotensin II can bind with high affinity to two distinct receptors, termed the angiotensin type 1 (AT1) and the angiotensin type 2 (AT2) receptor. These receptors be-long to a superfamily of G protein–coupled receptors that contain seven transmembrane regions. The amino acid sequence of these receptors is highly conserved across species. The AT1 and AT2 receptors share only 34% homology, have distinct signal transduction path-ways, and are not necessarily found on the same cell type or tissue. As previously discussed, most of the phys-iological effects of angiotensin II are mediated through effects at the AT1 receptor.

Mechanism of Action and Pharmacological Actions

Losartan (Cozaar) was the first imidazole AT1 receptor antagonist developed and is a selective competitive antagonist to angiotensin II. Other AT1 receptor antag-onists approved for the treatment of hypertension in-clude valsartan (Diovan), irbesartan (Avapro), can-desartan cilexetil (Atacand), telmisartan (Micardis), and eprosartan (Teveten). These antagonists share some pharmacological characteristics, including a high affinity for the AT1 receptor, little to no affinity for the AT2 re-ceptor, high protein binding, and the ability to produce an almost insurmountable blockade of the AT1 recep-tor. Although all of the AT1 receptor antagonists are competitive blocking drugs, they only slowly dissociate from the receptor, and their effects cannot be easily overcome.

Pharmacokinetic Profiles of AT1 Receptor Antagonists

While all AT1 receptor antagonists share the same mechanism of action, they differ in their pharmacoki-netic profiles. Losartan is well absorbed following oral administration and undergoes significant first-pass liver metabolism to an active metabolite, EXP3174. This metabolite is a long-acting (6–8 hours) noncompetitive antagonist at the AT1 receptor that contributes to the pharmacological effects of losartan. Production of the long-acting metabolite accounts for the sustained anti-hypertensive properties of losartan following chronic therapy, which would otherwise eventually be over-whelmed by removal of the negative feedback system (inhibition of renin release) for angiotensin II produc-tion. Following oral administration, 6% of losartan is excreted unchanged in the urine.

Clinical Uses of AT1 Receptor Antagonists

Adverse Effects of AT1 Receptor Antagonists