1. What are intercalary meristems? How do they differ from other meristems?

(i) It lies between the region of permanent tissues and is part of primary meristem. It is found either at the base of leaf e.g. pinus or at the base of intermodes e.g. Grasses.

(i) Complex tissues are made of more than one type of cells that work together as a unit.

(ii) Complex tissues consist of parenchyma and sclerenchyma cells. However, collenchymatous cells are not present in such tissues.

3. Mention the most abundant muscular tissue found in our body. State its function.

Answer: Skeletal muscle is the most abundant muscular tissue found in our body.

(i) These muscles are attached to the bones and are responsible for the body movements and are called skeletal muscles.

(ii) They work under our control and are also known as voluntary muscles.

(iii) They possess many nuclei (multinucleate).

(iv) For example they occur in the biceps and triceps of arms and undergo rapid contraction.

4. What is skeletal connective tissue? How is it helpful in the functioning of our body?

Answer: The supporting or skeletal connective tissues forms the endoskeleton of the vertebrate body. They protect various organs and help in locomotion. The supportive tissues include cartilage and bone.

5. Why should gametes be produced by meiosis during sexual reproduction?

6. In which stage of mitosis the chromosomes align in an equatorial plate? How?

Answer: Metaphase (meta - after) The duplicated chromosomes arrange on the equatorial plane and form the metaphase plate. Each chromosome gets attached to a spindle fibre by its centromere. The centromere of each chromosome divides into two each being associated with a chromatid.

Permanent tissues are those in which, growth has stopped either completely or for the time being. At times, they become meristematic partially or wholly.

(i) Parenchyma are simple permanent tissue composed of living cells.

(ii) Parenchyma cells are thin walled, oval, rounded or polygonal in shape with well developed spaces among them.

(iv) When exposed to light, parenchyma cells may develop chloroplasts and are known as chlorenchyma. 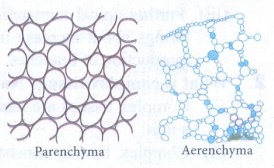 Functions: Parenchyma may store water in many succulent and xerophytic plants. It also serves the functions of storage of food reserves, absorption, buoyancy, secretion etc.,

(i) Collenchyma is a living tissue found beneath the epidermis. 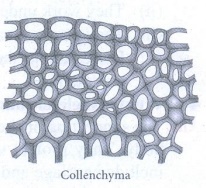 (i) Sclerenchyma consists of thick walled cells which are often lignified. 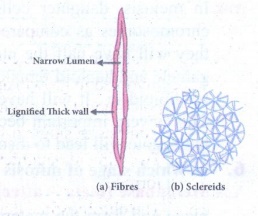 (i) Sclereids are widely distributed in plant body. They are usually broad, may occur in single or in groups.

(ii) Sclereids are isodiametric, with lignified walls. Pits are prominent and seen along the walls.

(iii) Lumen is filled with wall materials. Sclereids are also common in fruits and seeds.

2. Write about the elements of Xylem.

(i) Xylem is a conducting tissue which conducts water, mineral nutrients upward from root to leaves.

1. They are elongated or tube-like dead cells with hard, thick and lignified walls.

2. Their ends are tapering, blunt or chisel - like and are devoid of protoplast.

3. Their function is conduction of water and providing mechanical support to the plant.

1. These cells are elongated, lignified and pointed at both the ends.

1. They are long cylindrical, tube like structures with lignified walls and wide central lumen.

2. These cells are dead as these do not have protoplast.

3. They are arranged in longitudinal series in which the partitioned walls (transverse walls) are perforated, and so the entire structure looks-like a water pipe.

4. Their main function is transport of water and minerals from root to leaf, and also to provide mechanical strength.

These are living and thin walled. The main function of xylem parenchyma is to store starch and fatty substances.

2. Involved in growth and occurs continuously throughout life.

5. The chromosome number in the daughter cell is similar to the parent cell (2n).

2. Involved in gamete formation only during the reproductively active age.

5. The chromosome number in the daughter cell is just half (n) of the parent cell.

6. Daughter cells are not similar to the parent cell and are randomly assorted.

1. What is the consequence that occur if all blood platelets are removed from the blood?

2. Which are not true cells in the blood? Why?

Answer: Red blood cells or erythrocytes cannot be considered as true cells since they have a nucleus only in the early stages. A mature RBC lacks a nucleus which is the controlling centre of all living cells.

Rinse your mouth with water. Using a tooth pick or ice-cream stick, scrap superficial cells from inner side of the cheek and spread it on a clean glass slide. Dry the glass slide with the scrap cells taken from the inner side of cheek. Add two drops of methylene blue stain. Identify the cells under low and high power of the microscope.

2. Dark blue nucleus at the central part of each cell.