Answer: Taxonomy is the science of classification which makes the study of wide variety of organisms easier and helps us to understand the relationship among different group of animals.

3. Why coelenterates are called diploblastic animals?

Answer: The body wall of coelenterates is diploblastic with two layers, namely outer ectoderm and inner endoderm separated by non-cellular jelly -like substance called mesoglea. Due to presence of two layers in body wall, they are said to be diploblastic animals.

Answer: Respiration is through by gills, skin, buccopharynx and lungs.

5. How does locomotion take place in starfish?

Answer: Locomotion in starfish is affected by tube feet.

6. Are jellyfish and starfish similar to fishes? If no justify the answer

(i) Jelly fish is a coelenterate.   Their bodies are made of calcium carbonate.

(ii) Starfish fish is an echinoderm.

7. Why are frogs said to be amphibians?

Answer: They are the first vertebrates to live on land with dual adaptation to live in aquatic and land environments. This double life is expressed as amphibious.

Answer: (i) These are bilaterally symmetrical, triploblastic, first true coelomate animals with organ-system grade of organization.

(iii) It is covered by moist thin cuticle.

2. Differentiate between flat worms and round worms?

• They belong to Phylum Platyhelminthes.

• They are mostly parasitic.

• The alimentary canal is absent or simple.

• They belong to Phylum Aschelminthes.

• Exist as free - living soil forms or as parasites.

• The alimentary canal is a straight tube. 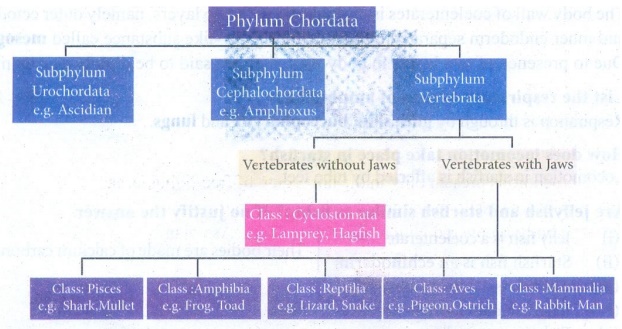 (i) Fishes are poikilothermic (cold-blooded), aquatic vertebrates with jaws.

(ii) The streamlined body is divisible into head, trunk and tail.

(iii) Locomotion is by paired and median fins.

(iv)The body has a covering of scales.

(v) Respiration is through gills.

(vi) The heart is two chambered with an auricle and a ventricle.

There are two main types of fishes.

(i) Cartilaginous fishes, with skeleton made of cartilages e.g. Sharks, Skates.

5. Comment on the aquatic and terrestrial habits of amphibians.

(i) The larva of amphibians (tadpole) lives in water and breathes with gills.

(iii) The adult frog has webbed feet to swim in water.

(iv) The skin is moist and glandular which helps in Respiration.

(i) The adults live on land and breathe through lungs. Bucco-pharynx also helps in Respiration.

(ii) The fore limbs are short and help to hop on land.

6. How are the limbs of the birds adapted for avian life?

Answer: (i) Forelimbs of birds are modified into wings with feathers for flight.

(ii) The hind limbs are adapted for walking perching or swimming.

(i) The prochordates are considered as the forerunners of vertebrates.

(ii) Based on the nature of the notochord, prochordata is classified into subphylum Urochordata and subphylum Cephalochordata.

(i) Notochord is present only in the tail region of free-living larva.

(iii) The body is covered with a tunic or test. E.g. Ascidian

(i) Cephalochordates are small fish like marine chordates with unpaired dorsal fins.

(ii) The notochord extends throughout the entire length of the body. E.g. Amphioxus

(i) Arthropoda is the largest phylum of the animal kingdom.

(ii) They are bilaterally symmetrical, triploblastic and coelomate animals.

(iii) The body is divisible into head, thorax and abdomen.

(v) Exoskeleton is made of chitin and is shed periodically as the animal grows.

(vi) The casting off and regrowing of exoskeleton is called moulting.

(viii) The blood does not flow in blood vessels and circulates throughout the body (open circulatory system)..

Identify the following pictures of Arthropods