1. What is solar system?

1. The Sun and celestial bodies which revolve around it form the solar system.

2. It consists of larger number of bodies such as planets, comets, asteroids and meteors.

The horizontal velocity that has to be imparted to a satellite at the determined height so that it makes a circular orbit around the planet is called ’’orbital velocity”.

3. Define time period of a satellite.

Answer: Time taken by the satellite to complete one revolution round the Earth is called time period of a satellite.

4. What is a satellite? What are the two types of satellites?

Answer: A body moving in an orbit around a planet is called satellite.

The two types of Satellites are

5. Write a note on the inner planets.

1. The planet that are relatively close together and close to the sun. They form the inner solar system and are called inner planets.

3. They have a surface of solid rock crust and are called terrestrial (or) rocky planets.

1.Comets are lumps of dust and ice that revolve around the Sun in highly elliptical orbits.

2. Their period of revolution is very long.

3. Comet vapourises and forms a head and tail on approaching the sun.

4. Tail of the biggest comet may be around 160 million km.

5. There are period comets (e.g) Halley's comet which appears after every 76 years.

The path of the planets about the Sun is elliptical in shape, with the centre of Sun being located at one of the foci.

Third law - the law of Harmonics

8. What factors have made life on Earth possible?

Factors responsible for life on Earth

1. Right distance from the Sun.

I. Give an account of all the planets in the solar system.

1. It is a Rocky planet nearest to the Sun.

2. It moves around the Sun faster than any other planet.

1. It is almost the same size as the Earth.

2. It is the Hottest planet in our solar system.

3. It is brightest heavenly body in our night sky.

4. It spins in the opposite direction to all other planets.

1. The only Life-Supporting planet in the solar system.

2. It appears Bluish green due to the reflection of light from water and land mass on its surface.

1. The first planet outside the orbit of the Earth.

2. It is also called the Red Planet having two small natural satellites.

1. Jupiter is called as Giant planet.

2. It is the largest of all planets.

4. Its moon Ganymede is the largest moon of our solar system.

1. It has bright shiny rings and appears yellowish in colour.

2. It is the second biggest and a giant gas planet in the outer solar system.

1. It is a cold gas giant and can be seen only with the help of large telescope.

2. It has longest summers and winters.

1. It appears as Greenish star and is the windiest plant.

2. It has the largest moon - Triton that moves in opposite direction to the direction in which its planet spins.

2. Discuss the benefits of ISS.

Eye tracking technology can be used in many laser surgeries which tracks eye's position very accurately and helps the disabled people with limited movement and speech. ,

4. Apart from the above, there are many other applications such as development of improved vaccines, breast cancer detection and treatment and so on.

3. Write a note on orbital velocity.

The horizontal velocity that has to be imparted to a satellite at the determined height so that it makes a circular orbit around the planet .

1. The orbital velocity of the satellite depends on its altitude above the Earth.

2. Nearer the object to the earth, faster is the required orbital velocity.

Satellite stays in a fixed position all the time while earth rotates. This kind of orbit is called geostationary.

h - Height of the satellite from the surface of the Earth.

1. Why do some stars appear blue and some red?

1. Stars appear in different colours depending on their temperatures.

2. Hot stars are white or blue in colour.

3. Cooler stars are orange or red in colour.

2. How is a satellite maintained in nearly circular orbit?

1. The satellite is carried by a rocket to the desired height and released horizontally with a high velocity.

2. So that it remains moving in a nearly circular orbit.

3. Why are some satellites called geostationary?

Answer: The Earth rotates once in 24 hours, a satellite stays in a fixed position. Because the satellite stays over the same spot all the time, this kind of orbit is called "geostationary".

1. Weight of the object depends upon the gravity of the planet.

2. The gravity of the sun is 28 times higher than the Earth. 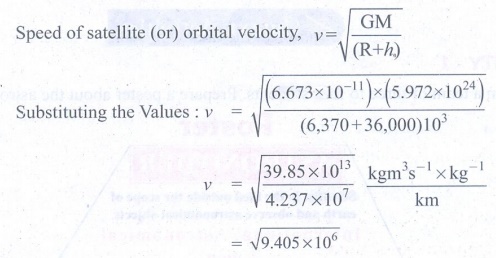 2. At an orbital height of 400 km, find the orbital period of the satellite. 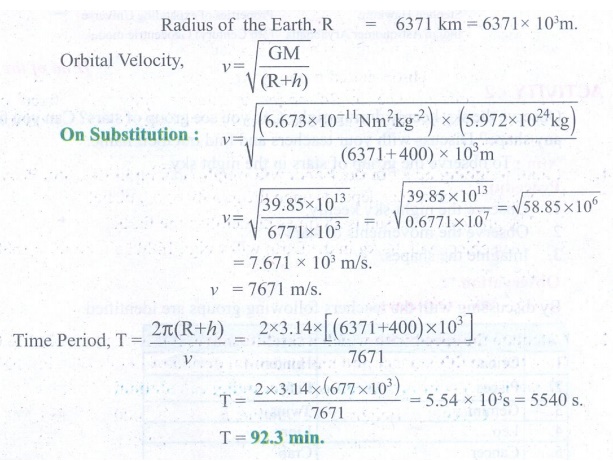 Form a team of three to four students. Prepare a poster about the astronomers. 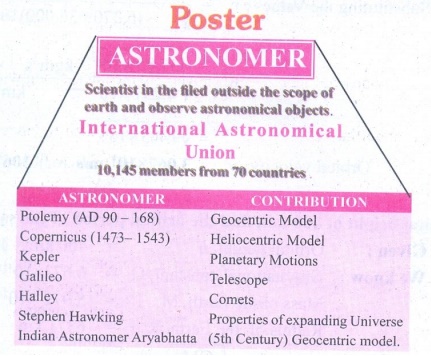 Observe the sky keenly during night. Can you see group of stars? Can you figure out any shape? Discuss with your teachers and find out their name.

Aim: To observe the group of stars in the night sky.

2. Observe the movements of stars

By discussing with the teachers following groups are identified.

Watch the sky in the early morning. Do you see any planet? What is its name? Find out with the help of your teachers.

1. Most of the planets cannot be seen in normal sky.

2. Few planets can be seen during some specific period in the night sky.

3. Mercury, closest to the sun can be seen from the earth.

4. Venus is also seen few days in a year.

5. Uranus may be also seen on odd days in October.

Prepare a list of Indian satellites from Aryabhatta to the latest along with their purposes. 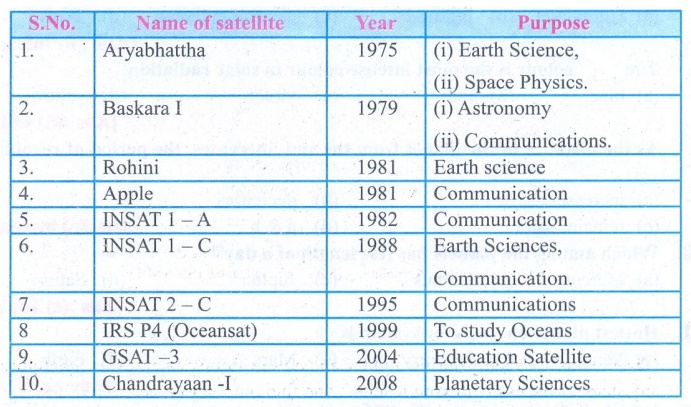