Main parts of an electric motor

4. Draw and label the diagram of an AC generator. 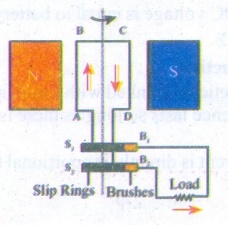 A B C D - Rectangular coil or armature.

5. State the advantages of ac over dc.

(ii) AC can be easily converted into D.C.

(iii) Only alternating voltage can be stepped up or stepped down by using a transformer.

(iv) AC can be transmitted to distant places without much loss of electric power than DC.

6. Differentiate step up and step down transformer. 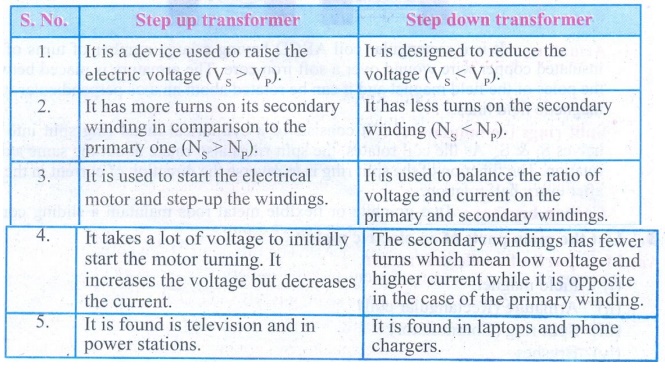 2. It has more turns on its secondary winding in comparison to the primary one (Ns > Np).

3. It is used to start the electrical motor and step-up the windings.

4. It takes a lot of voltage to initially start the motor turning. It increases the voltage but decreases the current.

5. It is found is television and in power stations.

3. It is used to balance the ratio of voltage and current on the primary and secondary windings.

4. The secondary windings has fewer turns which mean low voltage and higher current while it is opposite in the case of the primary winding.

5. It is found in laptops and phone chargers.

7. A portable radio has a built in transformer so that it can work from the mains instead of batteries. Is this a step up or step down transformer? Give reason.

Answer: It is a step down transformer. So that rectified DC voltage is equal to battery voltage, hence it can work on mains as well as on battery.

Second law: The magnitude of the induced current is directly proportional to the rate of change of magnetic flux linked with the coil.

1. Explain the principle, construction and working of a dc motor.

Principle: An electric motor works on the principle that a current carrying conductor placed in a magnetic field experiences a force. The direction of force is given by Fleming's left hand rule.

Construction: An electric motor consists of the following main parts: 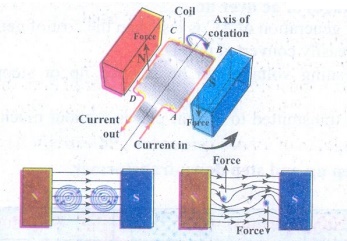 Armature: It is a rectangular coil ABCD having a large number of turns of this insulated copper wire wound over a soft iron core. The armature is placed between the poles of the field magnet and it can be rotated about an axis perpendicular to the magnetic field lines.

Split rings (commutators): It consists of a cylindrical metal ring split into two halves S1 & S2. As the coil rotates, the split rings also rotate about the same axis of rotation. The function of the split ring is to reverse the direction of current in the coil after every half rotation.

Battery: A battery of few cells is connected to the brushes. The current from the battery flows to the armature coil through the brushes and the split rings.

When the gap in the split ring commutator is aligned with terminals X and Y there is no flow of current in the coil. But, as the coil is moving, it continues to move forward bringing one of the split ring commutator in contact with the carbon brushes X and Y. The reversing of the current is repeated at each half rotation, giving rise to a continuous rotation of the coil. 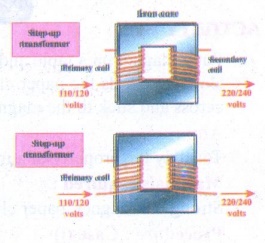 3. Draw a neat diagram of an AC generator and explain its working.

(i) An alternating current (AC) generator, as shown in, consists of a rotating rectangular coil ABCD called armature placed between the two poles of a permanent magnet.

(ii) The two ends of this coil are connected to two slip rings S1 and S2. The inner sides of these rings are insulated.

(iii) Two conducting stationary brushes B1 and B2 are kept separately on the rings S1 and S2 respectively.

(iv) The two rings S1 and S2 are internally attached to an axle.

(v) The axle may be mechanically rotated from outside to rotate the coil inside the magnetic field. Outer ends of the two brushes are connected to the external circuit.

(vi) When the coil is rotated, the magnetic flux linked with the coil changes. This change in magnetic flux will lead to generation of induced current.

(vii) The direction of the induced current, as given by Fleming’s Right Hand Rule, is along ABCD in the coil and in the outer circuit it flows from B2 to B1.

(viii) During the second half of rotation, the direction of current is along DCBA in the coil and in the outer circuit it flows from B1 to B2.

To study the property of a magnet.

(i) Put a bar magnet on a table and place some paper clips nearby.

(i) From the above activity, we can conclude that magnets have an invisible field all around them which attracts magnetic materials.

(ii) In this space we can feel the force of attraction or repulsion due to the magnet.

Take a cardboard and thread a wire perpendicular through it. Connect the wire such that current flows up the wire. Switch on the circuit. Let the current flow. Place a magnetic compass on the cardboard and mark the position. Now move magnet and mark the new position. If you join all the points you will find that it is a circle. Reverse the direction of the current, you will find the magnetic circles are clockwise.

To observe the magnetic field around a straight conductor carrying current.

(i) Fix a white cardboard horizontally.

(ii) Make a small hole at its centre.

(iii) Pass the thick copper wire through the hole, perpendicular to the cardboard.

(iv) Join the ends of the thick copper wire to a battery and a key with the help of some connecting wires.

(v) Switch on the circuit. Let the current flow.

(vi) Place a magnetic compass on the cardboard.

(vii) Mark S and N point of the compass X and Y respectively on the cardboard.

(viii) Move the compass such that S end touches Y.

(ix) Now mark the N end as Z. In the next step move the compass such that S end touch Z. Repeat the steps.

(x) Now join all the points. What do you observe?

(xi) Now keep the compass away from the centre and follow.

Create your own electromagnet

You are given a long iron nail, insulation coated copper wire and a battery. Can you make your own electromagnet?

To create your own electromagnet.

(i) Take an iron nail, wind ten or more loops of insulated copper wire around it. However, make sure not to be make the diameter of the loop more than a centimetre in width.

(ii) Connect the ends of the wire to a key and a battery.

(iii) Switch on the key and bring some paper clips close to the nail.

(iv) Switch off the key. What do you observe?

Thus an electro magnet is a temporary magnet which behaves as a magnet in the presence of electric current.