1. A bird sitting on a high power electric line is still safe. How?

Birds can sit on power lines and not get electric shocks because the electricity is always looking for a way to get to the ground (i.e.) the current is not flowing out of its body to any other material.

Current flows in a loop (which means the circuit is closed). A bird sitting on a transmission line does not complete the circuit. If the same bird keeps one leg on one line and another leg or any part of its body on another line or the neutral points, then it will get burnt.

2. Does a solar cell always maintain the potential across its terminals constant? Discuss.

3. Can electroplating be possible with alternating current?

The heating effect and the chemical effect experiments have to be performed only with a dc cell of around 9V. The 9V dc cell will not give any electrical shock.

At any cost we should not use the main domestic electric supply which is 220V ac voltage. If it is used it will give a heavy electric shock leading to a severe damage to our body.

1. On what factors does the electrostatic force between two charges depend?

Answer: The numerical value (magnitude) of electric force between two charges depend on the,

(i) value of charges on them,

(ii) distance between them and

(iii) nature of medium between them.

2. What are electric lines of force?

Answer: The lines representing the electric field are called electric lines of force.

4. Define electric current and give its unit.

Answer: The electric current is defined as the rate of flow of electric charge through any

section of a conductor.

Answer: Ohm's law states that, the current passing through a conductor is directly proportional to the potential difference across its ends, provided the physical conditions like temperature, density, etc. remain unchanged. V α I or V = IR.

6. Name any two appliances which work under the principle of heating effect of current.

7, How are the home appliances connected in general, in series or parallel. Give reasons.

Answer: In a household electric circuit, different home appliances are connected in parallel to one another due to the following reasons:

(i) The appliances can be operated independently. If one appliance is switched off, others remain unaffected.

(ii) Each appliance gets the same constant voltage.

(iii) In parallel connection of electrical appliances, the overall resistance of the circuit it reduced due to which the current form the power supply is high.

The metal bodies of all the electrical appliances are to be connected to the ground by means of a third wire apart from the two wires used for electrical connection.

It is an electromechanical device which does not allow a current beyond a particular value by automatically switching off the connection.

A fuse is another safety mechanism which works on joule heating principle.

(a) Find which material has lost electron and which one gained it.

(b) Find how many electrons are transferred in this process.

2. Calculate the amount of charge that would flow in 2 hours through an element of an electric bulb drawing a current of 2.5A.

3. The values of current (I) flowing through a resistor for various potential differences V across the resistor are given below. What is the value of resistor? 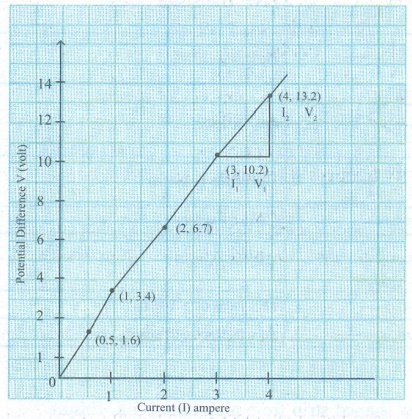 Take a condemned electronic circuit board in a TV remote or old mobile phone. Look at the electrical symbols used in the circuit. Find out the meaning of the symbols known to you. 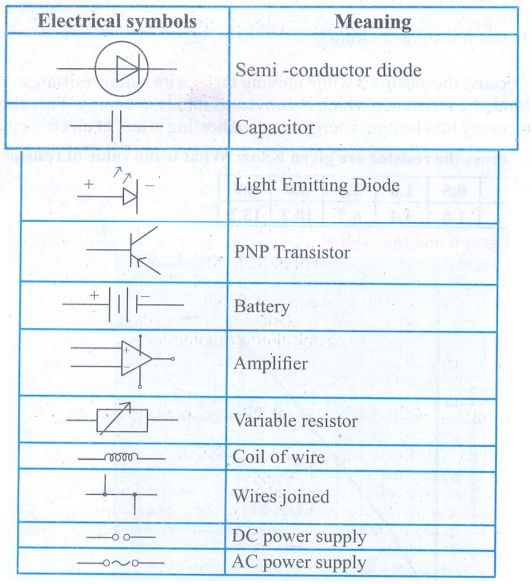 Cut an arrow shaped strip from aluminium foil. Ensure that the head is a fine point. Keep the arrow shaped foil on a wooden board. Connect a thin pin to two lengths of wire. Connect the wires to the terminals of electric cell, may be of 9V. Press one pin onto the pointed tip and other pin at a point about one or two mm away. Can you see that the tip of aluminium foil starts melting? 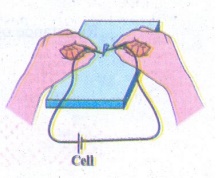 To understand the heating effect of electric current.

Cut an arrow shaped strip from aluminium foil. Keep the arrow shaped foil on a wooden board. Connect a pin to two lengths of wire. Connect the wires to the terminals of electric cell of 9 V. Press one pin onto the pointed tip and another pin at a point about one or two mm away.

It starts melting because the electrons while moving in the wire suffer resistance. Work is done to overcome the resistance which is converted into heat energy. This conversion of electrical energy into heating energy is called heating effect of electric current. 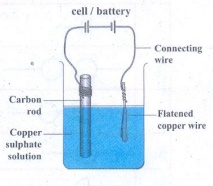 • Take a beaker half filled with copper sulphate solution.

• Take a carbon rod and wind a wire on its upper end.

• Take a thick copper wire, clean it well and flatten it with a hammer.

• Immerse both the copper wire and carbon rod in the copper sulphate solution.

• Ensure both the rods do not touch each other, but are close enough.

• Observe for some time.

After some time, we would find fine copper deposited over the carbon rod.