(i) Velocity is the rate of change of displacement. It is the displacement with unit time. It is a vector quantity. The SI unit of velocity is ms-1.

1. The actual length of the path travelled by a moving body irrespective of the direction

2. It is a Scalar quantity

1. The change in position of a moving body in a particular direction

2. It is a Vector quantity

3. What do you mean by uniform motion?

An object is said to be in uniform motion if it covers equal distances in equal intervals of time howsoever big or small these time intervals may be. 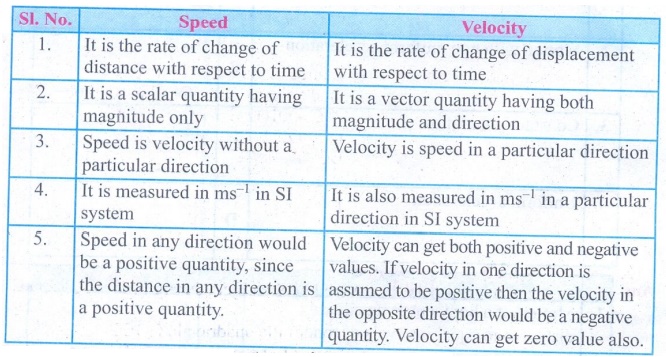 1. It is the rate of change of distance with respect to time

2. It is a scalar quantity having magnitude only

3. Speed is velocity without a particular direction

1. It is the rate of change of displacement with respect to time

2. It is a vector quantity having both magnitude and direction

3. Velocity is speed in a particular direction

4. It is also measured in ms-1 in a particular direction in SI system

5. What do you understand about negative acceleration?

If velocity decreases with time the value of acceleration is negative.

6. Is the uniform circular motion accelerated? Give reasons for your answer.

When an object is moving with a constant speed along a circular path, the change in velocity is only due to the change in direction. Hence it is accelerated motion.

When an object moves with constant speed along a circular path, the motion is called uniform circular motion.

1. The Earth moves around the Sun in the uniform circular motion.

2. The Moon moves in uniform circular motion around the Earth.

1. Derive the equations of motion by graphical method. 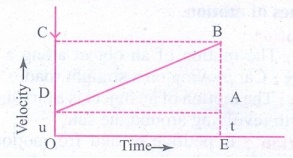 Graph shows the change in velocity with time of a uniformly accelerated object. The object starts from the point D in the graph with velocity u. Its velocity keeps increasing and after time t it reaches the point B on the graph.

The initial velocity of the object = u = OD = EA

Also from the graph we know that, AB = DC

This is first equation of motion.

2. Second equation on of motion:

s = area of the quadrangle DOEB

This is the second equation of motion.

From the graph the distance covered by the object during time t is given by the area of the quadrangle DOEB. Here DOEB is a trapezium. Then,

This is the third equation of motion.

(ii) Circular motion: The motion of an object is a circular path is known as circular motion. Ex: Earth revolving around the sun.

(iv) Random motion: The disordered or irregular motion of a body is called random motion. Ex: Movement of fish under water.

a) Calculation of final velocity, v

b) Calculation of time, t

2. An athlete completes one round of a circular track of diameter 200 m in 40 s. What will be the distance covered and the displacement at the end of 2 m and 20 s?

Answer: Here we have

Circular track with diameter of 200m

We know that, velocity along a circular path = circumference / time

We know that, distance = velocity × time

We know that, distance = velocity × time

∴ In 3.5 rotation athlete will be just at the opposite side of the circular track.

i.e. at a distance equal to the diameter of the circular track which is equal to 200m

3, A racing car has a uniform acceleration of 4ms−2. What distance it covers in 10s after the start?

Thus, racing car will cover a distance of 200 m after start in 10s with given acceleration.

1. Row of houses, large trees, small plants are the examples, of immovable objects.

2. Flying birds, running cars and buses are the examples of movable objects.

Activity to be done by the students themselves

Tabulate the distance covered by a bus in a heavy traffic road in equal intervals of time and do the same for a train which is not in an accelerated motion. From your table what do you understand?

Observe the motion of a car as shown in the figure and answer the following questions:

Compare the distance covered by the car through the path ABC and AC. What do you observe? 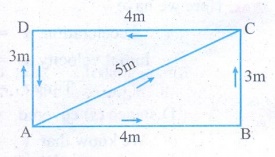 3. The total distance covered by the car ABCDA = 14 m. It finally reaches to A.

Both the stone and the eraser have reached the surface of the Earth almost at the same time.

The eraser reaches first and the sheet of paper reaches later.