1. What are the advantages of memory management in Operating System?

Answer: (i) Keeping track of which portion of memory are currently being used and who is using them.

(ii) Determining which processes (or parts of processes) and data to move in and out of memory.

(iii) Allocation and de-allocation of memory blocks as needed by the program in main memory. (Garbage Collection).

2. What is the multi-user Operating system?

(i) It is used in computers and laptops that allow same data and applications to be accessed by multiple users at the same time.

(ii) The users can also communicate with each other. Windows, Linux and UNIX are examples for multi-user Operating System.

Answer: The GUI is a window based system with a pointing device to direct I/O, choose from menus, make selections and a keyboard to enter text. Its vibrant colours attract the user very easily.

5. What are the security management features available in Operating System ?

Answer: The Operating System provides three levels of securities to the user end. They are

Answer: This is a one of the features of Operating System. It has two or more processors for a single running process (job). Processing takes place in parallel is known as parallel processing.

7. What are the different Operating Systems used in computer?

Answer: The different types of operating system used in the computer:

1. What are the advantages and disadvantages of Time-sharing features?

• Provides the advantage of quick response.

• Question of security and integrity of uses programs and data.

2. Explain and List out examples of mobile operating system.

3. What are the differences between Windows and Linux Operating system? 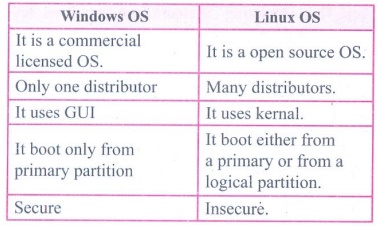 • It boot only from primary partition

• It boot either from a primary or from a logical partition.

Answer: The following algorithms are mainly used to allocate the job (process) to the processor.

(iv) Based on Priority

(i) FIFO (First In First Out) Scheduling: This algorithm is based on queuing technique. The process that enters the queue first is executed first by the CPU, followed by the next and so on. The processes are executed in the order of the queue.

(ii) SJF (Shortest Job First) Scheduling: This algorithm works based on the size of the job being executed by the CPU.

(iii) Round Robin Scheduling : The Round Robin (RR) scheduling algorithm is designed especially for time sharing systems. Jobs (processes) are assigned and processor time in a circular method.

(iv) Based On Priority: The given job (process) is assigned based on a Priority. The job which has higher priority is more important than other jobs.

1. Explain the concept of a Distributed Operating System.

Answer: This feature takes care of the data and application that are stored and processed on multiple physical locations across the world over the digital network. The Distributed Operating System is used to access shared data and files that reside in any machine around the world. The user can handle the data from different locations. The users can access as if it is available on their own computer.

The advantages of distributed Operating System are as follows:

(i) A user at one location can make use of all the resources available at another location over the network.

(ii) Many computer resources can be added easily in the network

(iii) Improves the interaction with the customers and clients.

(iv) Reduces the load on the host computer.

2. Explain the main purpose of an operating system.

The main purpose of using an operating system:

(i) It controls and co-ordinates all the activities of a computer system.

(ii) It provides an environment for a computer user to execute programs on computer hardware in a convenient and efficient manner.

(iii) It enable the user to design the application, and also it provides an interface to interact with the computer and controls the execution of all kinds of programs without knowing the internals of the hardware. It interprets the command and instructions to perform the specified tasks.

(iv) It co-ordinates and assigns the compilers, assemblers, utility programs to the users. It detects errors present in the hardwares and softwares. It maintains the internal time clock.

(v) It protects itself from being destroyed by any users. It serves two major functions Supervision (Prevent errors), Management (Operation and control of I/O devices).

(vi) It loads the programs itself into memory so that user can interact with hardwares and softwares.

(i) It is generally free.

(ii) It is continually evolving in real time as developers add to it and modify it, which means it can be better quality and more secure and less prone to bugs.

(iii) Using open source software also means the users are not locked into using a particular vendor's system that only work with their other system.

(iv) The user can modify and adapt open source software for own business requirements.

(i) Open source software might not be as user friendly as commercial versions because less attention is paid to developing the user interface.