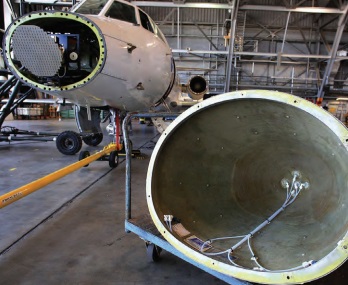 Armstrong's flight expertise and airspace are being leveraged to support a series of tests that will study the effects of alternate biofuel on engine performance, emissions, and aircraft-generated contrails at altitude. Sponsored by NASA's Langley Research Center, the ACCESS-II flight experiment involves flying a DC-8 aircraft as high as 38,000 feet while three instrumented aircraft-a Langley HU-25C Guardian, a Falcon from the German Aerospace Center (DLR), and a

T-33 from the National Research Council of Canada (NRC)-trail behind at distances ranging from 300 feet to more than 10 miles and measure exhaust fumes from the DC-8 engines. During the flights, the DC-8 engines will be powered by conventional fuel and a blend of two other mixes of conventional fuel and an alternative biofuel. More than a dozen instruments will characterize the soot and gases collected from the DC-8, monitor the way exhaust plumes change in composition as

they mix with air, and investigate the role emissions play in contrail formation.

Work to date: A pair of ground-based studies in 2009 and 2011 measured a DC-8's exhaust emissions as the aircraft burned alternative fuels. Flight experiments in 2013 occurred with the sampling HU-25C Guardian aircraft flying behind the DC-8.

Looking ahead: Data collection and analysis will be conducted by Langley, and Armstrong will provide the lead aircraft, pilots, and

airspace. Representatives from Canada and Germany will participate in the experiments, as those countries also are interested in wake vortex and emissions research.

Aids research: Will enable the collection of real-time data about engine fumes

Reduces pollution: Will contribute to the design of cleaner jet engines