After the completion of this lesson, students will be able to:

* Know about different layers of atmosphere.

* Understand the causes of air pollution.

* Know about the airborne diseases.

* Understand the importance of air in daily life.

Air is present everywhere around us. Though we cannot see it we can feel it. Air is a mixture of gases like oxygen, nitrogen, carbon dioxide and hydrogen. These gases act as an envelope around the earth and form the atmosphere. It is the presence of atmosphere that makes the earth a suitable place for living. In the recent years more number of industries has been established and they release excess of harmful gases like carbon dioxide into the atmosphere. Because of this air is polluted more than ever before. In this lesson we are going to study about different layers of atmosphere, air pollution, air borne diseases and the measures to control air pollution.

The earth is surrounded by a layer of gases which is called the atmosphere. It is composed mainly of nitrogen (78%) and oxygen (21%). Other gases like carbon dioxide and argon comprise 1% of the atmosphere by volume. The atmosphere is like a blanket that surrounds the earth. It protects the Earth from getting too cold or too hot.

Atmosphere is divided into five different layers. The layers from the bottom upwards are called Troposphere, Stratosphere, Mesosphere, Thermosphere and Exosphere. 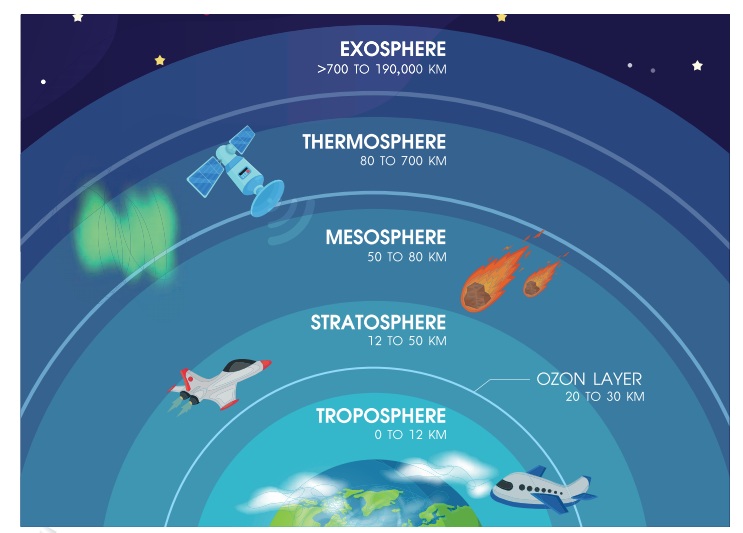 It extends from the top of the troposphere to about 50 km above the ground. Ozone layer found in this layer absorbs harmful ultraviolet rays which can cause damage to our skin and eyes. There is no water vapor in this layer. The temperature in this layer is around −550 C.

The region above the stratosphere is called the mesosphere. It extends upward to a height of about 85km from the ground. The temperature in this layer decreases with height and it is −1100 C. Most of the meteors found in the sky burn in this layer.

The outermost layer of the atmosphere is called the exosphere. It lies between 400 - 1500 km above the earth.The air here is extremely thin.

As the height increases the amount of air in the atmosphere decreases and so the oxygen level will decrease. That is why mountain climbers carry oxygen cylinders while climbing mountains. 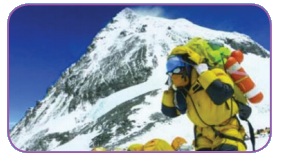 Water vapour present in the air is important for the formation of water cycle. Water from the water bodies such as rivers and oceans evaporates and becomes water vapour. This water vapour then forms the clouds. These clouds move to the land and get cooled to give us the rain. This movement of clouds is possible due to air.

We breathe oxygen present in the air and it is supplied to the cells in our body. Body cells burn the food molecules with the help of oxygen and produce energy. With this energy we do all kinds of works. 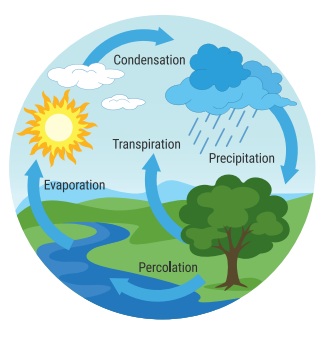 We hear many things from the surrounding and people hear what we speak. This is possible due to air because sound needs a medium to travel. Sound travels from the point of generation to the listener through air.

Nitrogen present in the air is useful for plants. The nitrogen in the atmosphere is converted into easily absorbable nitrates by plants with the help of some microbes. It is known as nitrogen fixation. These nitrates are useful for the growth of plants. Also air is helpful for the pollination of plants. Pollen grains travel from one plant to another plant through air. Thus cross pollination is achieved with the help of air.

Movement of air is called wind. This is helpful for the ships and boats to sail on the water. Airplanes and helicopters travel though air.

Paragliding is the recreational and competitive adventure sport of flying. In this sports pilot sits in a harness suspended below a fabric wing. Hang gliding is also an air sport or recreational activity in which a pilot flies a light, non-motorized foot – launched air craft called a hang glider. Paragliding and hang gliding are possible with the help of air. Other sports like wind surfing, kite surfing and sailing are also possible with the hep of air.

Bir billing in Jogindernagar valley of Himachal Pradesh is known as para-gliding capital of India. In Tamilnadu, Yelgiri is a good paragliding spot.

Find out the places where wind energy is produced. Also discuss about the importance of wind energy in the classroom and make a report on your discussion.

Parachutes and hot air balloons are used to land from above. In case of emergency, people use parachutes and come down slowly and safely with the help of air.

Air flows from a region of high pressure to low pressure. This flow of air at high speed is called wind. This wind is used to generate electric power with the help of wind mills.

The presence of harmful substances in the air which can have an adverse effect on living beings and the environment is called air pollution. When harmful substances including gases like carbon dioxide, carbon monoxide, sulphur dioxide etc., and particles like dust and aerosols are released into the earth’s atmosphere, air pollution occurs. These substances are released into the atmosphere at a rate which exceeds the natural capacity of the environment to absorb them. Air pollution may cause diseases, allergies and even death to humans. It may also cause harm to other living organisms such as plants and animals. It may damage the natural environment also.

Air pollution is caused by both natural and manmade activities. Air pollutants are released into the atmosphere through human activities like burning of fuels, releasing industrial wastes, mining etc. Natural events like volcanic eruption also cause air pollution. Let us see about some of the causes of air pollution in detail.

Many industries have been established to manufacture things. Large amount of carbon monoxide, hydrocarbons, organic compounds, and chemicals are released into the air by these industries. Because of this pollutants quality of air is affected very much.

The word pollution is derived from the Latin word ‘polluere’ which means contamination or make dirty.

Use of insecticides, pesticides, and fertilizers in agricultural activities has increased in the modern days. They emit harmful chemicals such as ammonia into the air causing air pollution.

Taj Mahal in Agra is built entirely by white marbles. But it has become yellow in colour in the recent years. It is because of air pollution. Industries located in these areas release lot of pollutants into the air. Every day 2000 metric tons of waste is being dumped into the city.

Extraction of minerals from the earth is called mining. Mining processes release dust and chemicals into the air causing massive air pollution. This affects the health conditions of workers and the people living in the surrounding areas.

Air is polluted through household activities also. While cleaning and painting we use lot of chemicals. These chemicals pollute the environment.

Air pollution affects all living organisms including man. It causes serious health problems to human beings and affects both plants and animals. It brings about lot of changes in the climate and environment also. In this section let us learn about some of the effects of air pollution.

Air pollution causes several respiratory and heart problems. Many people have died due to air pollution. Air pollutants cause pneumonia and asthma in children. 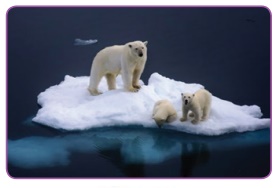 As we saw earlier harmful gases like nitrogen oxides and sulfur oxides are released into the atmosphere while burning fossil fuels. When it rains, the water droplets combine with these gases and fall on the ground in the form of acid rain. Acid rain affects human, animals, and crops. 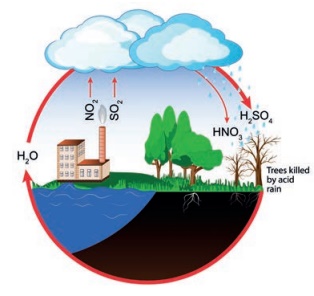 Ozone molecules are present in the Earth’s stratosphere and they are responsible for protecting humans from harmful ultraviolet (UV) rays. Chlorofluorocarbons, released into the atmosphere by human activities deplete the ozone layer. As the ozone layer is depleted, UV rays reach the earth and they cause skin and eye related problems to us. 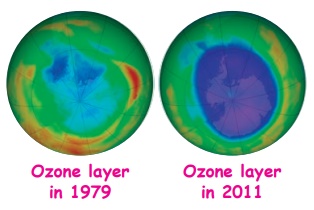 Large amount of nitrogen present in some fertilisers is washed into the water bodies. They cause the growth of green algae in the seas. This is called Eutrophication. This adversely affects fish, plants and animal species.

Harmful substances present in the air affect wild animals. Wild animals move to a new place when the air is polluted. When their habitat is changed they face extinction.

Chemicals like chlorofluorocarbon (CFC) which are used in refrigerators, spray cans and fire extinguishers, have reduced the amount of ozone in the stratosphere. It has resulted in the depletion of ozone layer in the Antarctic region.

If the air pollution increases at this rate, then there will be no life on the earth in the future. Future generation will be affected very badly. So we need to take some measures to avoid air pollution. Some of them are discussed below.

* Major pollutants which cause air pollution come from automobiles. Using public modes of transport can reduce the rate of pollution. We also should encourage others to use public transport.

* By reducing the usage of fossil fuels for burning we can save the environment.

* We need to reduce our usage. We can reuse or recycle few items.

* Switch off fans and lights when you are not using them.

* CFL bulbs consume less electricity. By using these bulbs we can save energy.

* Planting more trees can reduce the amount of carbon dioxide in the atmosphere.

Find out the common air pollutants present in your area. Discuss about the effects of these pollutants. Record your observations in your note book.

Diphtheria, Whooping Cough and Tuberclosis are some of the common airborne diseases caused by bacteria.

It is caused by the bacteria, Cornebacterium diphtheria. It generally affects the upper respiratory tract (nose and throat) and causes fever, sore throat and chocking of air passage.

Tuberculosis is caused by the bacteria, Microbacterium tuberculosis. When we breathe, the bacteria present in the air gets into the lungs and affect it. Infected person has to be treated with anti-tubercular drugs for a period of 6 months to one year. 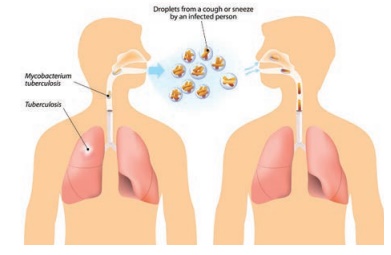 Some diseases are caused by the virus present in the air. Common cold, influenza, measles, mumps and chickenpox are some of the diseases caused by virus.

Common cold is an infectious disease which affects the upper respiratory system like nose and throat and it is easily spread. Symptoms of common cold include cough, painful throat, running nose and sometimes fever. Though many viruses can cause this, it is generally caused by Rhinovirus.

Influenza is commonly found during childhood. It is caused by the virus, Myxo virus and results in inflammation of nasal mucosa and pharynx. It is also known as flu.

It is caused by Myxovirus parotidis and it affects the upper respiratory tract. Some of the common symptoms of mumps include fever, headaches, sore throat and swelling of parotoid glands which makes the jaw movement difficult. 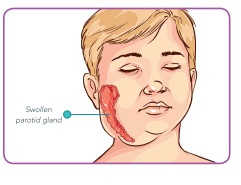 It is common among children but adults also may get it. Affected people will have blisters or spots in the body and face along with fever. Those blisters with fluid will drain but sometimes it may leave scars.

Measles is caused by Rubeola virus and it is easily caught by people from other infected people. Symptoms of measles include eruption of small rashes in skin, cough, sneezing, redness of eye, pneumonia and bronchitis. There is no cure for this disease. Yet people can recover from this by proper rest and diet. 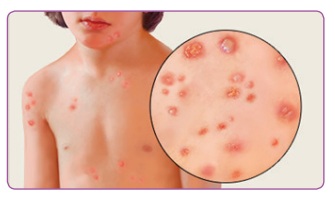 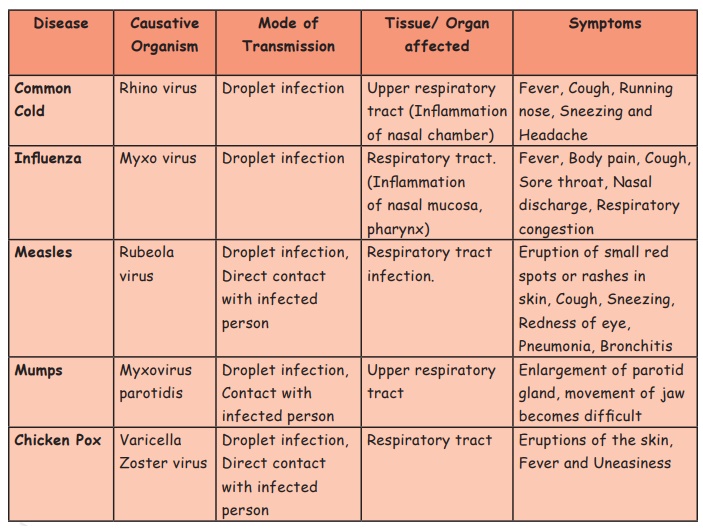 Prevention is better than cure. Airborne diseases can be prevented if we take certain measures.

* Avoid close contact with people who have active symptoms of disease.

* Keep the patient in complete isolation.

* Cover nose and mouth while sneezing or coughing.

* Avoid touching the face or other people with unwashed hands.

* Timely vaccination can prevent the diseases.

Divide the students in the class into different groups and discuss how airborne diseases can be prevented.