Chapter: 10th English: UNIT 5 : Supplementary/Story: A day in 2889 of an American Journalist

A day in 2889 of an American Journalist

This story speaks about the people of the twenty-ninth century who live in fairyland. Surfeited as they are with marvels, they are indifferent to the presence of each new marvel. To them all seem natural.

A day in 2889 of an American Journalist

This story speaks about the people of the twenty-ninth century who live in fairyland. Surfeited as they are with marvels, they are indifferent to the presence of each new marvel. To them all seem natural.

The year is 2889, the date 25th July and the place is the office block of the Managing Editor of the Earth Herald, the world’s largest newspaper.

In this futuristic story written in 1889, the writer describes how he visualizes the world a thousand years later – a world of technological advancements where newspapers are not printed but ‘spoken’.

Read the following excerpt for a glimpse of this future world.

That morning Francis Bennett awoke in rather a bad temper. This was eight days since his wife had been in France and he was feeling a little lonely. As soon as he awoke, Francis Bennett switched on his phonotelephote whose wires led to the house he owned in the Champs-Elysees. 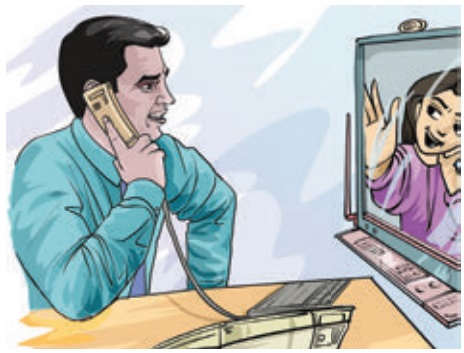 The telephone, completed by the telephote, is another of our time’s conquests! Though the transmission of speech by the electric current was already very old, it was only since yesterday that vision could also be transmitted. A valuable discovery, and Francis Bennett was by no means the only one to bless its inventor when, in spite of the enormous distance between them, he saw his wife appear in the telephotic mirror. ‘Francis … dear Francis!...’ 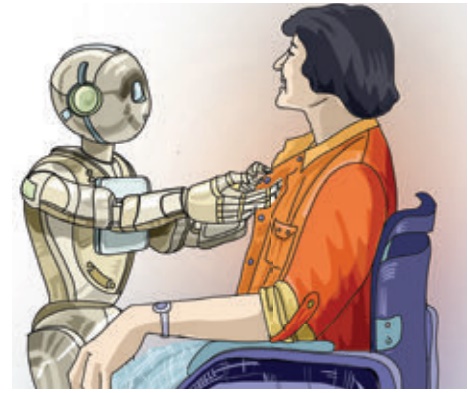 His name, spoken by that sweet voice, gave a happier turn to Francis Bennett’s mood. He quickly jumped out of bed and went into his mechanized dressing room. Two minutes later, without needing the help of a valet, the machine deposited him, washed, shaved, shod, dressed and buttoned from top to toe, on the threshold of his office. The day’s work was going to begin.

Francis Bennett went on into the reporters’ room. His fifteen hundred reporters, placed before an equal number of telephones, were passing on to subscribers the news which had come in during the night from the four quarters of the earth. In addition to his telephone, each reporter has in front of him a series of commutators, which allow him to get into communication with this or that telephotic line.

Thus the subscribers have not only the story but the sight of these events.

Francis Bennett questioned one of the ten astronomical reporters – a service which was growing because of the recent discoveries in the stellar world.

‘Nothing so far! We haven’t been able to understand the signals the Jovians make. Perhaps ours haven’t reached them? ….’

‘Aren’t you getting some result from the moon, at any rate?’

‘Well, this time, you can’t blame optical science! The moon is six hundred times nearer than Mars, and yet our correspondence service is in regular operation with Mars. It can’t be telescopes we need…’

‘No, it’s the inhabitants,’ Corley replied.

‘You dare tell me that the moon is uninhabited?’

‘On the face it turns towards us, at any rate, Mr Bennett. Who knows whether on the other side…’

‘Well, there’s a very simple method of finding out.’ 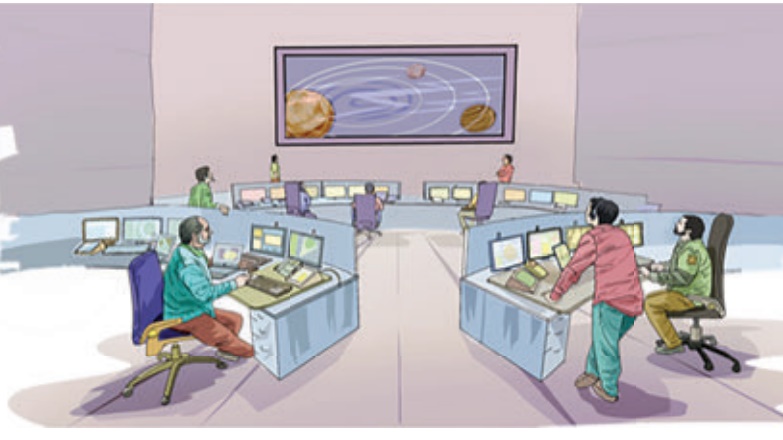 ‘To turn the moon round!’

And that very day, the scientists of the Bennett factory started working out some mechanical means of turning our satellite right round.

On the whole, Francis Bennett had reason to be satisfied. One of the Earth Herald’s astronomers had just determined the elements of the new planet Gandini. It is at a distance of 12,841,348,284,623 metres and 7 decimetres that this planet describes its orbit round the sun in 572 years, 194 days, 12 hours, 43 minutes, 9.8 seconds. Francis Bennett was delighted with such precision.

‘Good!’ he exclaimed. ‘Hurry up and tell the reportage service about it. You know what a passion the public has for these astronomical questions. I’m anxious for the news to appear in today’s issue!’

The next room, a broad gallery about a quarter of a mile long, was devoted to publicity, and it well may be imagined what the publicity for such a journal as the Earth Herald had to be. It brought in a daily average of three million dollars. They are gigantic signs reflected on the clouds, so large that they can be seen all over a whole country. From that gallery a thousand projectors were unceasingly employed in sending to the clouds, on which they were reproduced in colour, these inordinate advertisements.

At that moment the clock struck twelve. The director of the Earth Herald left the hall and sat down in a rolling armchair. In a few minutes he had reached his dining room half a mile away, at the far end of the office.

The table was laid and he took his place at it. Within reach of his hand was placed a series of taps and before him was the curved surface of a phonotelephote, on which appeared the dining room of his home in Paris. Mr and Mrs Bennett had arranged to have lunch at the same time – nothing could be more pleasant than to be face to face in spite of the distance, to see one another and talk by means of the phonotelephotic apparatus. 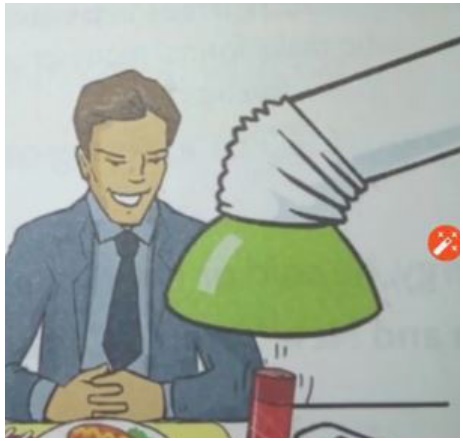 Like everybody else in easy circumstances nowadays, Francis Bennett, having abandoned domestic cooking, is one of the subscribers to the Society for Supplying Food to the Home, which distributes dishes of a thousand types through a network of pneumatic tubes. This system is expensive, no doubt, but the cooking is better. So, not without some regret, Francis Bennett was lunching in solitude. He was finishing his coffee when Mrs Bennett, having got back home, appeared in the telephote screen.

When he had finished his lunch, he went across to the window, where his aero-car was waiting.

‘Where are we going, Sir?’ asked the aero-coachman. ‘Let’s see. I’ve got time…’ Francis Bennett replied. ‘Take me to my accumulator works at Niagara.’

The aero-car shot across space at a speed of about four hundred miles an hour. Below him were spread out the towns with their moving pavements which carry the wayfarers along the streets, and the countryside, covered, as though by an immense spider’s web, by the network of electric wires. 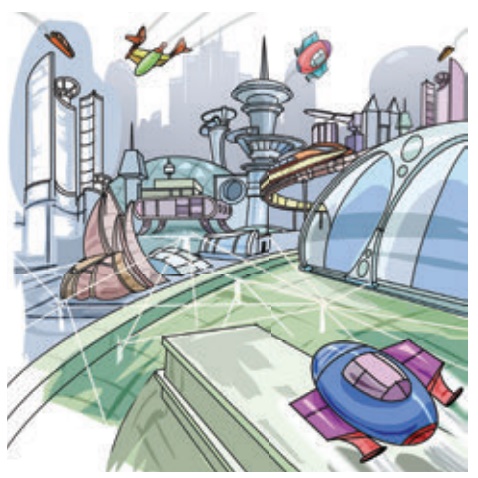 Within half an hour, Francis Bennett had reached his works at Niagara, where, after using the force of the cataracts to produce energy, he sold or hired it out to the consumers. Then he returned, by way of Philadelphia, Boston and New York, to Centropolis, where his aero-car put him down about five o’clock.

The waiting-room of the Earth Herald was crowded. A careful lookout was being kept for Francis Bennett to return for the daily audience he gave to his petitioners. Among their different proposals he had to make a choice, reject the bad ones, look into the doubtful ones, and welcome the good ones.

He soon got rid of those who had only useless or impracticable schemes. A few of the others received a better welcome, and foremost among them was a young man whose broad brow indicated a high degree of intelligence.

‘Sir’, he began, ‘though the number of elements used to be estimated at seventy-five, it has now been reduced to three, as no doubt you are aware?’

‘Well, Sir, I’m on the point of reducing the three to one. If I don’t run out of money I’ll have succeeded in three weeks.’

‘Then, Sir, I shall really have discovered the absolute’.

‘And the results of that discovery?’

‘It will be to make the creation of all forms of matter easy – stone, wood, metal, fibrin ….’

‘Are you saying you’re going to be able to construct a human being?’

‘Complete… The only thing missing will be the soul!’

Francis Bennett assigned the young fellow to the scientific editorial department of his journal.

A second inventor, using as a basis some old experiments that dated from the 19th century, had the idea of moving a whole city in a single block. He suggested, as a demonstration, the town of Saaf, situated fifteen miles from the sea; after conveying it on rails down to the shore, he would transform it into a seaside resort. Francis Bennett, attracted by this project, agreed to take a half-share in it.

The proposals heard and dealt with, Francis Bennett went to stretch himself out in an easy-chair in the audition-room. Then, pressing a button, he was put into communication with the Central Concert. After so busy a day, what charm he found in the works of our greatest masters, based on a series of delicious harmonico-algebraic formulae! During his meal, phonotelephotic communication had been set up with Paris.

‘When do you expect to get back to Centropolis, dear Edith?’ asked Francis Bennett.

‘I’m going to start this moment’.

‘At eleven fifty-nine this evening’.

‘Goodbye then, and above all don’t miss the tube!’

These submarine tubes, by which one travels from Paris in two hundred and ninety-five minutes, are certainly much preferable to the aero-trains, which only manage six hundred miles an hour.

Francis Bennett, very tired after so very full a day, decided to take a bath before going to bed. There was always a bath already in the office. He touched the button. A rumbling sound began, got louder, increased … Then one of the doors opened and the bath appeared, gliding along on its rails …

Jules Verne (1828–1905) was a French poet, playwright and novelist  but he earns his place on this list of great writers because of his futuristic  adventure novels. He has been called the father of science fiction and has had an incalculable influence on the phototelegrams (n): a telegraphic development of science fiction writing. More interesting, perhaps, is his place as a prophet or predictor of technology which wasn’t to be invented until long after his death. He put a man on the moon, including its launch from a Florida launchpad to its splashdown in the Pacific; in 1863 he predicted the internet: Paris in the 20th Century (1863) depicts the details of modern life: skyscrapers, television, Maglev trains, computers, and a culture preoccupied with the Internet. 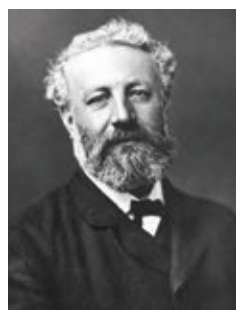