The biochips known as DNA microarrays and oligonucleotide microarrays are a surface collection of hundreds to thousands of immobilized DNA sequences.

The biochips known as DNA microarrays and oligonucleotide microarrays are a surface collection of hundreds to thousands of immobilized DNA sequences or oligo-nucleotides in a grid created with specialized equipment that can be simultaneously examined to conduct expression analysis (Khan et al., 1999; Southern, 2001; Amaratunga et al., 2007). Biochips may contain representatives of a particular set of gene sequences (i.e., sequences coding for all human cytochrome P450 isozymes) or may contain sequences representing all genes of an organism. They can produce massive amounts of genetic information (Butte, 2002; Vaince et al., 2006). While the in vitro diagnostics market has been difficult to enter, Roche Diagnostics AmpliChip CYP 450 is a FDA-approved diagnostic tool able to determine a patient’s genotype with respect to two genes that govern drug metabo-lism. This information obtained may be useful by a physician to select the appropriate drug and/or dosage for a given patient in the areas of cardiovas-cular disease, high blood pressure, depression, and others (according to the company). 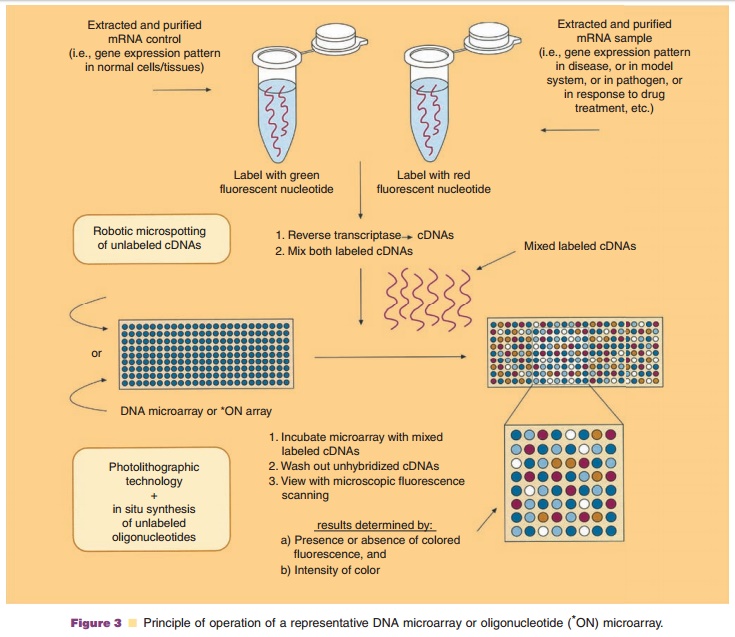 Microarray analysis has gained increasing sig-nificance as a direct result of the genome sequencing studies. Array technology is a logical tool for studying functional genomics since the results obtained may link function to expression. Microarray technology’s poten-tial to study key areas of molecular medicine and drug discovery is unlimited at this stage of development. For example, gene expression levels of thousands of mRNA species may be studied simultaneously in normal versus cancer cells, each incubated with potential anticancer drug candidates. Related microarray tech-nologies include protein microarrays, tissue micro-arrays, cell microarrays (also called transfection microarrays), chemical compound microarrays, and antibody microarrays. The principles are he same, while the immobilized collections differ accordingly.