Structural genomics, functional genomics, proteomics, and other “omic” technologies have generated an enormous volume of genetic and biochemical data to store.

Structural genomics, functional genomics, proteomics, and other “omic” technologies have generated an enormous volume of genetic and biochemical data to store. The entire encoded human DNA sequence alone requires computer storage of approximately 109 bits of information: the equivalent of a thousand 500-page books! GenBank (managed by the National Center for Biotechnology Information, NCBI, of the National Institutes of Health), the European Molecular Biology Laboratory (EMBL), and the DNA Data Bank of Japan (DDBJ) are three of the many centers worldwide that collaborate on collecting DNA sequences. These databanks, (both public and private) store tens of millions of sequences (Martin et al., 2007). Metabolic databases and other collections of biochemical and bioactivity data add to the complexity and wealth of information (Olah and Oprea, 2007). Once stored, analyzing the volumes of data, (i.e., comparing and relating information from various sources) to identify useful and/or predictive characteristics or trends, such as selecting a group of drug targets from all proteins in the human body,presents a Herculean task. This approach has the potential of changing the fundamental way in which basic science is conducted and valid biological conclusions are reached (Baxevanis, 2001).

Scientists have applied advances in information technology, innovative software algorithms and mas-sive parallel computing to the on-going research in genetics, genomics, proteomics, and related areas to give birth to the fast growing field of bioinformatics (Emmett, 2000; Felton, 2001; Watkins, 2001; Lengauer and Hartman, 2007). Bioinformatics is the application of computer technologies to the biological sciences with the object of discovering knowledge. With bioinformatics, a researcher can now better exploit the tremendous flood of genomic and proteomic data, more cost-effectively data mining for a drug discovery “needle” in that massive data “haystack.” In this case, data mining refers to the bioinformatics approach to “sifting” through volumes of raw data, identifying and extracting relevant information, and developing useful relationships among them. Modern drug discovery will utilize bioinformatics techniques to gather information from multiple sources (such as the HGP, functional genomic studies, proteomics, pheno-typing, patient medical records, and bioassay results including toxicology studies), integrate the data, apply life science developed algorithms, and generate useful target identification and drug lead identifica-tion data. Another goal of bioinformatics is to be able to study the molecules and processes discovered by genomics and proteomics research in silico: that is, to be able to predict chemical and physical structure and properties by computer (Rashidi and Buehler, 2000).

Bioinformatics in its multi-faceted implementa-tions may be thought of as a technique of “electronic biology” (eBiology), conceptual biology, in silico biol-ogy, or computational biology (Blagosklonny and Pardee, 2002). A data-driven tool, the integration of bioinformatics with functional knowledge of the com-plex biological system under study remains the critical of any of the omic technologies described above and to follow. As seen in Figure 2, the hierarchy of information collection goes well beyond the biodata contained in the genetic code that is transcribed and translated. 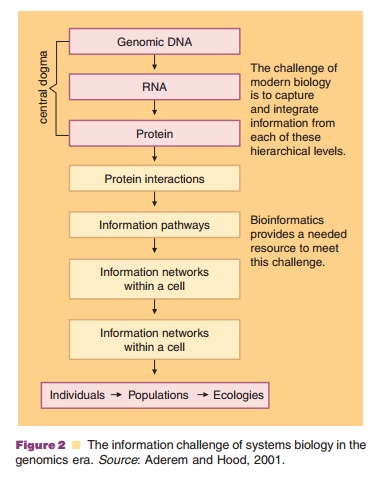