Chapter: Medical Physiology: Introduction to Physiology: Functional Organization of the Human Body and Control of the “Internal Environment”

The term homeostasis is used by physiologists to mean maintenance of nearly constant conditions in the inter-nal environment.

The term homeostasis is used by physiologists to mean maintenance of nearly constant conditions in the inter-nal environment. Essentially all organs and tissues ofthe body perform functions that help maintain these constant conditions. For instance, the lungs provide oxygen to the extracellular fluid to replenish the oxygen used by the cells, the kidneys maintain con-stant ion concentrations, and the gastrointestinal system provides nutrients.

As blood passes through the blood capillaries, continual exchange of extracellular fluid also occurs between the plasma portion of the blood and the

interstitial fluid that fills the intercellular spaces. This process is shown in Figure 1–2. The walls of the capil-laries are permeable to most molecules in the plasma of the blood, with the exception of the large plasma protein molecules. Therefore, large amounts of fluid and its dissolved constituents diffuse back and forth between the blood and the tissue spaces, as shown by the arrows. This process of diffusion is caused by kinetic motion of the molecules in both the plasma and the interstitial fluid. That is, the fluid and dissolved molecules are continually moving and bouncing in all directions within the plasma and the fluid in the inter-cellular spaces, and also through the capillary pores. Few cells are located more than 50 micrometers from a capillary, which ensures diffusion of almost any sub-stance from the capillary to the cell within a few seconds. Thus, the extracellular fluid everywhere in the body—both that of the plasma and that of the inter-stitial fluid—is continually being mixed, thereby maintaining almost complete homogeneity of the extracellular fluid throughout the body. 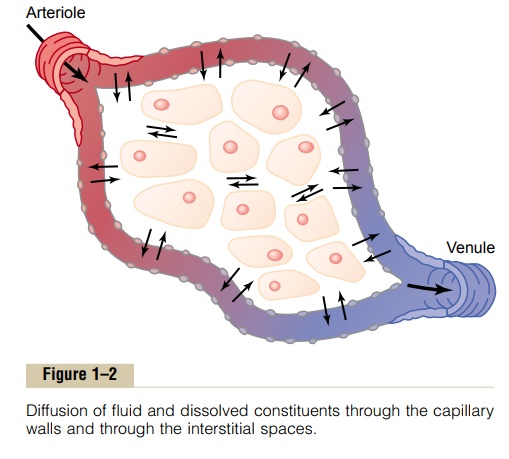 Origin of Nutrients in the Extracellular Fluid

Respiratory System. Figure 1–1 shows that each time theblood passes through the body, it also flows through the lungs. The blood picks up oxygen in the alveoli, thus acquiring the oxygen needed by the cells. The membrane between the alveoli and the lumen of the pulmonary capillaries, the alveolar membrane, is only 0.4 to 2.0 micrometers thick, and oxygen diffuses by molecular motion through the pores of this membrane into the blood in the same manner that water and ions diffuse through walls of the tissue capillaries.

Gastrointestinal Tract. A large portion of the bloodpumped by the heart also passes through the walls of the gastrointestinal tract. Here different dissolved nutrients, including carbohydrates, fatty acids, andamino acids, are absorbed from the ingested food intothe extracellular fluid of the blood.

Liver and Other Organs That Perform Primarily Metabolic Func-tions. Not all substances absorbed from the gastroin-testinal tract can be used in their absorbed form by the cells. The liver changes the chemical compositions of many of these substances to more usable forms, and other tissues of the body—fat cells, gastrointestinal mucosa, kidneys, and endocrine glands—help modify the absorbed substances or store them until they are needed.

Musculoskeletal System. Sometimes the question isasked, How does the musculoskeletal system fit into the homeostatic functions of the body? The answer is obvious and simple: Were it not for the muscles, the body could not move to the appropriate place at the appropriate time to obtain the foods required for nutrition. The musculoskeletal system also provides motility for protection against adverse surroundings, without which the entire body, along with its homeo-static mechanisms, could be destroyed instantaneously.

Removal of Carbon Dioxide by the Lungs. At the same timethat blood picks up oxygen in the lungs, carbon dioxide is released from the blood into the lung alveoli; the res-piratory movement of air into and out of the lungs carries the carbon dioxide to the atmosphere. Carbon dioxide is the most abundant of all the end products of metabolism.

Kidneys. Passage of the blood through the kidneysremoves from the plasma most of the other substances besides carbon dioxide that are not needed by the cells. These substances include different end products of cellular metabolism, such as urea and uric acid; they also include excesses of ions and water from the food that might have accumulated in the extracellular fluid.

The kidneys perform their function by first filtering large quantities of plasma through the glomeruli into the tubules and then reabsorbing into the blood those substances needed by the body, such as glucose, amino acids, appropriate amounts of water, and many of the ions. Most of the other substances that are not needed by the body, especially the metabolic end products such as urea, are reabsorbed poorly and pass through the renal tubules into the urine.

Nervous System. The nervous system is composed ofthree major parts: the sensory input portion, the centralnervous system (or integrative portion), and the motor output portion. Sensory receptors detect the state ofthe body or the state of the surroundings. For instance, receptors in the skin apprise one whenever an object touches the skin at any point. The eyes are sensory organs that give one a visual image of the surrounding area. The ears also are sensory organs. The central nervous system is composed of the brain and spinal cord. The brain can store information, generate thoughts, create ambition, and determine reactions that the body performs in response to the sensations. Appropriate signals are then transmitted through the motor output portion of the nervous system to carry out one’s desires.

A large segment of the nervous system is called the autonomic system. It operates at a subconscious leveland controls many functions of the internal organs, including the level of pumping activity by the heart, movements of the gastrointestinal tract, and secretion by many of the body’s glands.

Hormonal System of Regulation. Located in the body areeight major endocrine glands that secrete chemical substances called hormones. Hormones are trans-ported in the extracellular fluid to all parts of the body to help regulate cellular function. For instance, thyroid hormone increases the rates of most chemical reac-tions in all cells, thus helping to set the tempo of bodily activity. Insulin controls glucose metabolism; adreno-cortical hormones control sodium ion, potassium ion, and protein metabolism; and parathyroid hormone controls bone calcium and phosphate. Thus, the hor-mones are a system of regulation that complements the nervous system. The nervous system regulates mainly muscular and secretory activities of the body, whereas the hormonal system regulates many meta-bolic functions.

Sometimes reproduction is not considered a homeo-static function. It does, however, help maintain home-ostasis by generating new beings to take the place of those that are dying. This may sound like a permissive usage of the term homeostasis, but it illustrates that, in the final analysis, essentially all body structures are organized such that they help maintain the automatic-ity and continuity of life.