What is the pathophysiology of dilated cardiomyopathy?

The dilated cardiomyopathies are characterized by elevated filling pressures, failure of myocardial contractile strength, and a marked inverse relationship between arterial impedance and stroke volume.

What is the pathophysiology of dilated cardiomy-opathy?

The dilated cardiomyopathies are characterized by elevated filling pressures, failure of myocardial contractile strength, and a marked inverse relationship between arterial impedance and stroke volume. The dilated cardio-myopathies present a picture very similar to that of CHF produced by severe coronary artery disease (CAD).

The pathophysiologic considerations are familiar ones. As the ventricular muscle weakens, the ventricle dilates in order to take advantage of the increased force of contraction resulting from increasing myocardial fiber length. As the ventricular radius increases, however, ventricular wall tension rises, increasing both the oxygen consumption of the myocardium and the total internal work of the muscle. As the myocardium deteriorates further, the cardiac output falls, and a compensatory increase in sympathetic activity occurs to maintain organ perfusion and cardiac output.

One feature of the failing myocardium is the loss of its ability to maintain stroke volume in the face of increased arterial impedance to ejection. As left ventricular dysfunc-tion worsens, stroke volume becomes more dependent on arterial impedance (afterload). In the failing ventricle, stroke volume falls almost linearly with increases in afterload. The increased sympathetic outflow that accom-panies left ventricular failure initiates a vicious cycle of increased resistance to forward flow, decreased stroke volume and cardiac output, and further sympathetic stimu-lation in an effort to maintain circulatory homeostasis (Figure 4.1). 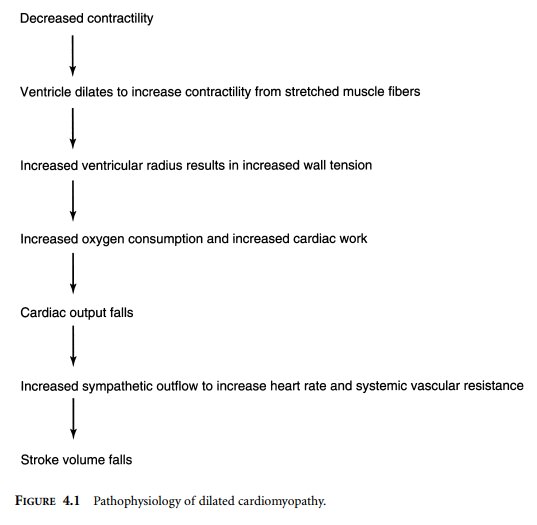 There is some degree of mitral regurgitation in severe dilated cardiomyopathies due to stretching of the mitral annulus and distortion of the geometry of the chordae tendineae. The forward stroke volume improves with after-load reduction, even though there is no increase in ejection fraction. This suggests that reduction of mitral regurgitation is the mechanism of the improvement. Afterload reduction also decreases left ventricular filling pressure, which relieves pulmonary congestion and should preserve coronary perfusion pressure.

The clinical picture of the dilated cardiomyopathies falls into the two familiar categories of “forward” failure and “backward” failure. The features of “forward” failure, such as fatigue, hypotension, and oliguria, are due to diminished cardiac output and organ perfusion. Decreased renal perfusion results in activation of the renin-angiotensin-aldosterone system that increases the effective circulating blood volume through sodium and water retention. “Backward” failure is related to the elevated filling pressures required by the failing ventricle(s). As the left ventricle dilates, “secondary” mitral regurgitation occurs due to the mechanisms noted above. The manifestations of left-sided ventricular failure include orthopnea, paroxysmal nocturnal dyspnea, and pulmonary edema. The manifestations of right-sided ventricular failure include hepatomegaly, jugular venous distention, and peripheral edema. 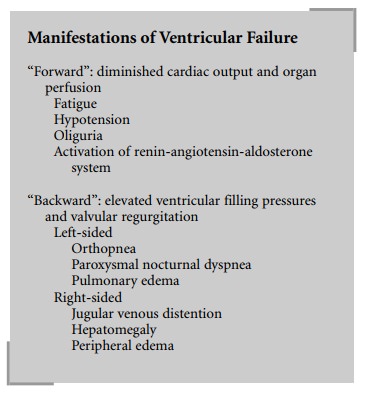