The term ‘Non-Alignment’ was coined by V. Krishna Menon in his speech at the United Nations in 1953. Non-alignment has been regarded as the most important feature of India’s foreign policy.

The term ‘Non-Alignment’ was coined by V. Krishna Menon in his speech at the United Nations in 1953. Non-alignment has been regarded as the most important feature of India’s foreign policy. It aimed to maintain national independence in foreign affairs by not joining any military alliance. The Non-Aligned Movement (NAM) was formed with a membership of 120 countries and 17 states as observers and 10 international organisations. It has transformed from a political movement to an economical movement.

The Non-alignment roots did not prevent India from entering into an alignment with the Soviet Union by the Indo-Soviet treaty of 1971 (20-year pact of ‘peace, friendship and co-operation’). Then India embarked on a substantial programme of military modernisation. In 1974, India also conducted its first nuclear test at Pokhran under Subterranean Nuclear Explosions Project, in response to China’s nuclear test in 1964 at Lop Nor.

Changing global conditions determine the foreign policy details. India got her political freedom in the aftermath of a disastrous Second World War, and India had to be redeemed from acute poverty illiteracy, and chaotic socio-economic conditions. Hence our new nation could not afford to military entanglements and military alliances. Avoidance of military blocs was then not an option but a necessity. Non Alliance did not mean neutrality, but the freedom of nations to decide on issues independently. Non-alliance did not mean demilitarisation of nations. It was meant to ensure de-escalation of conflicts and tension. Even wither discarding the ‘Non-Alliance’ India could enormously strengthen her defence system and could become a nuclear power. Flaws or faults in details of foreign policy executions have been addressed time and again but India’s basic policy of non-Alliance is still in force. 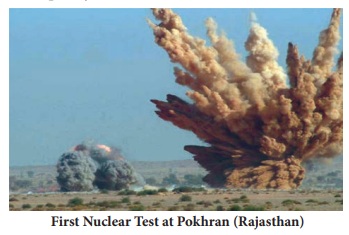 New Developments: in the 1990s and the 20th Century

During the 1990’s along with the fall of the Soviet Union, a new global economic order (Liberalisation, Privatisation, and Globalisation) emerged with the support of the western powers. India entered into pacts with global economic forum (GATT) and entered into bilateral, trilateral, multilateral agreements. Its nuclear experiments resulted in intimidatory reactions from the western world.

•  The second nuclear test at Pokhran (1998) in Rajasthan

•  Agreeing to US nuclear missile defence program and

•  India’s vote against Iran at the International Atomic Energy Agency

India in the Resurgent 21st Century

The foremost task of India’s foreign policy is to enable the domestic transformation of India.

India engages with current global subjects and articulates its international policies in order to gain a prominent place and makes its presence felt in on a global scale. It has joined new global groups like the Group of 20 (G-20), India, Brazil, South Africa (IBSA), and Brazil, Russia, India, China, South Africa (BRICS), which gives more scope for India to play a larger role in global affairs.

India’s global security concerns are reflected in its military modernisation, maritime security and nuclear policies. India has emerged as a major voice in global decision-making and management, and as a bridge and balancing power in the emerging global strategic architecture. The response of our policymakers at economic, political and strategic level have enabled India to emerge as a potential great power though it faces enormous developmental challenges. These challenges include sustaining the country’s economic growth rate, ensuring energy and security. Non-military issues like climate change, energy security, competition for scarce resources, food and water security, pandemics and migration. Though numerous and formidable, these challenges are not beyond the reach of India’s policy establishment.