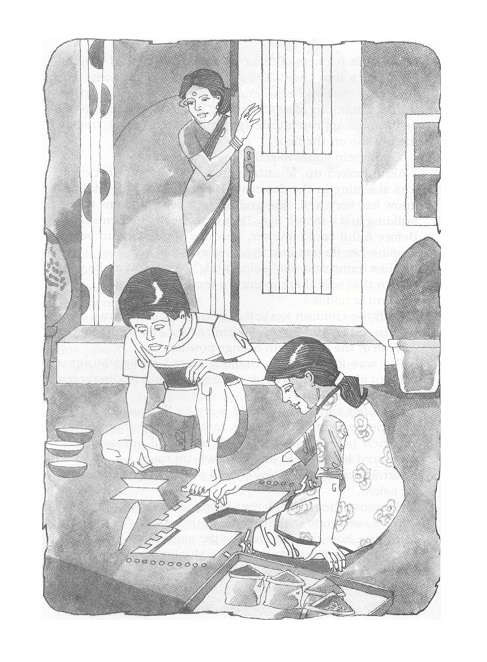 Nobody seemed to want Akhil around. Dadi had just shooed him out of the kitchen, and now Mummy wanted him out of the way of her cleaning. Everybody was busy getting ready for Diwali.
The  Rangoli
Nobody   seemed   to   want   Akhil   around.   Dadi  had  just shooed  him  out  of  the  kitchen,   and  now  Mummy  wanted him  out  of  the  way  of  her  cleaning.   Everybody  was  busy getting  ready  for  Diwali.
"I  wish  there  was  something  I  could  do,"  moped  Akhil.
"I  will  tell  you  what,  Akhil,  why  don't  you  do the rangoli this year?"
Akhil's face lit up. "Oh! Mummy, can I? But," he continued doubtfully, "I have never done it before."
"There is always a first time," encouraged his mother.
"Besides, you have seen me do it so many times, I am sure you will be able to do it."
"What design shall I make?" wondered Akhil.
"Make whatever you like, Akhil," urged his mother, getting a  bit  impatient  with  him.  She  wanted  to  get  on  with her work.
Akhil chose the same spot where his mother drew the rangoli every year, right at the front door. Just above, hung a picture  of Gandhiji.  Akhil  somehow liked  the  picture.
The smile on Bapuji's face reminded him of his own Bapuji, his Mummy's father.  He settled down with the steel tray full of little packets of different colours. He loved dipping his  fingers  into  the  colours  and  seeing  them  come  out covered with pink,  blue  and purple powders.  He  sat on the floor, thinking of what to make.. .a lamp! Yes, that would be the most appropriate design for Diwali! He began tracing the outline on the floor.
"Can I help you?" asked a small voice.
Akhil looked up. Mumtaz, the girl who lived next door, was standing in the doorway. He hesitated as he did not know her very well.  She and her mother had come to the building just a month ago. They kept mostly to themselves.
Before Akhil could answer, Mumtaz sat down and began dipping her fingers into the powders.
"I like doing that too," said Akhil. "Come, you make your design that side. I am making a lamp here." Mumtaz nodded.
Both the children worked in silence for some time.
"Where  is your  father?"  Akhil  asked,  as  he  filled  the outline of the flame with orange powder.
"He was  killed  in  the  Bombay  riots,"  replied  Mumtaz without lifting her head. Her deft fingers were trickling green colour on the floor.
Akhil felt embarrassed and sorry he had asked.  He did not know what to say. Finally, he asked, "What are riots?"
"When  people who  hate  each  other  kill  one  another," answered Mumtaz, in a very grown-up voice.
Akhil was puzzled. "Why should people hate each other?" he asked.
"Because they are different," replied Mumtaz.
"Well, everyone is different," argued Akhil. "Tall, short, fat, thin...how can everyone be the same?"
"Ammi says it is because we are Muslims," said Mumtaz.
"I don't hate you, I like you," said Akhil.
Mumtaz did not say anything.  She just peeped at him through her eyelashes and smiled shyly at him.
"There!  how  does  that  look?"  she  asked,  dusting  the purple colour off her fingers.
"It is beautiful!" exclaimed Akhil,  admiring the design.
Mumtaz had made a castle with domes.
"It is Alladin's castle," she said.
"And  what  does  this  mean?"  asked Akhil,  pointing to something she had written under the castle.
"This  means  Diwali  Mubarak  (Happy  Diwali).  I  have written in Urdu," she explained.
They were so absorbed in what they were doing, they did not hear Mumtaz's mother come out of her flat to look for Mumtaz. Seeing Mumtaz busy with the colours, she scolded her, "Mumtaz,  don't meddle with his rangoli!"
"She is not meddling, aunty, in fact, she is helping me," Akhil  explained.
"Let her be,  they are enjoying it,"  said Akhil's mother, who had come out upon hearing voices.
"You are sure you don't mind?" asked Mumtaz's mother.
"She...she has written in Urdu..."
"And  he  has  made  a  lamp,"  smiled  Akhil's  mother.
"What better way is  there to  show that festivals  are for coming together?"
"There,  we  have  finished,"  said  Akhil.  "Do  you  like it, Mummy?"
"Of course, Akhil!" assured his mother, drawing him and Mumtaz close, "I could never have made such a beautiful and colourful  rangoli."
She smiled at Mumtaz's mother who smiled back. "See, Akhil, even Bapuji likes it!"
And indeed Gandhiji's smile did seem a bit wider as he looked down at the rangoli from the wall.
Study Material, Lecturing Notes, Assignment, Reference, Wiki description explanation, brief detail
SHORT STORIES FOR CHILDREN kids school student : The Rangoli |