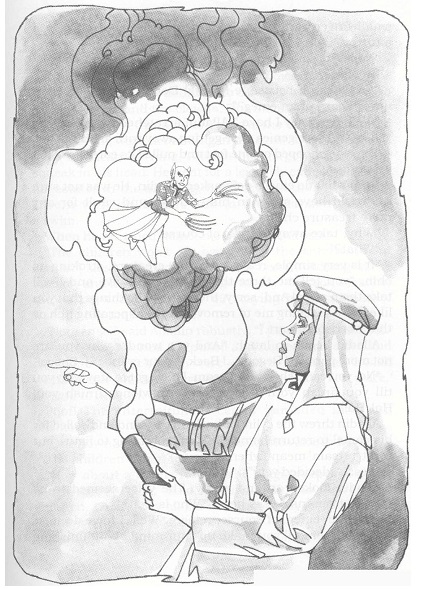 Alladin sat beside the oasis one sunny Saharan day. 'Allah be praised,' he said to himself, 'thanks to my genie, I have everything a man could wish for-a palace for a home, treasure chests overflowing with gold mohurs (coins), a fleet of the best Bactrians and a loving family. I should be happy.' He sighed.

"I knew those genies were getting away with  all the  glory!"

The eineg hopped on one foot and pulled its ears.  It looked very  cross.

After  dimmer  that  night  Alladin  sat  down  in  front  of  the entertainment center  and  tried to  concentrate  on the  antics of the jugglers  and  the  clowns.  But  instead  of the  popular number  sung by the famous Velma of the Veils,  all he  could hear was one word drumming in his  ears,  "Decide!  decide!"

When he returned home,  his wife was in tears.

"Nonsense,"  said Alladin robustly,  "I paid for that school."

But he was worried.  He pulled  and tugged,  wheedled  and cajoled,  but  the  children  were  glued  to  the  stage.   'I  wish we had never got that entertainment center in the first place,' he  said  to  himself.

The  children  began  to  cry.

Alladin walked  over  to  his  favourite  camel  and  tugged  at its reins.  "Get up, you flat-footed,  furry-eared,  noisy beast," he  yelled.

smell delicious,"  said Alladin,  "I wonder why I never noticed them  before?"

'Maybe  I  should  have waited  till  they  carried  all  the  stuff 9 home.  How am I going to cart all this stuff?' thought Alladin.