JDK 8 adds a new type of iterator called a spliterator that is defined by the Spliterator interface. A spliterator cycles through a sequence of elements, and in this regard, it is similar to the iterators just described.

JDK 8 adds a new type of iterator called a spliterator that is defined by the Spliterator interface. A spliterator cycles through a sequence of elements, and in this regard, it is similar to the iterators just described. However, the techniques required to use it differ. Furthermore, it offers substantially more functionality than does either Iterator or ListIterator. Perhaps the most important aspect of Spliterator is its ability to provide support for parallel iteration of portions of the sequence. Thus, Spliterator supports parallel programming. (See Chapter 28 for information on concurrency and parallel programming.) However, you can use Spliterator even if you won’t be using parallel execution. One reason you might want to do so is because it offers a streamlined approach that combines the hasNext and next operations into one method.

Here, T is the type of elements being iterated. Spliterator declares the methods shown in Table 18-10.

Using Spliterator for basic iteration tasks is quite easy: simply call tryAdvance( ) until it returns false. If you will be applying the same action to each element in the sequence, forEachRemaining( ) offers a streamlined alternative. In both cases, the action that will occur with each iteration is defined by what the Consumer object does with each element. Consumer is a functional interface that applies an action to an object. It is a generic functional interface declared in java.util.function. (See Chapter 19 for information on java.util.function.) Consumer specifies only one abstract method, accept( ), which is shown here:

In the case of tryAdvance( ), each iteration passes the next element in the sequence to objRef. Often, the easiest way to implement Consumer is by use of a lambda expression. 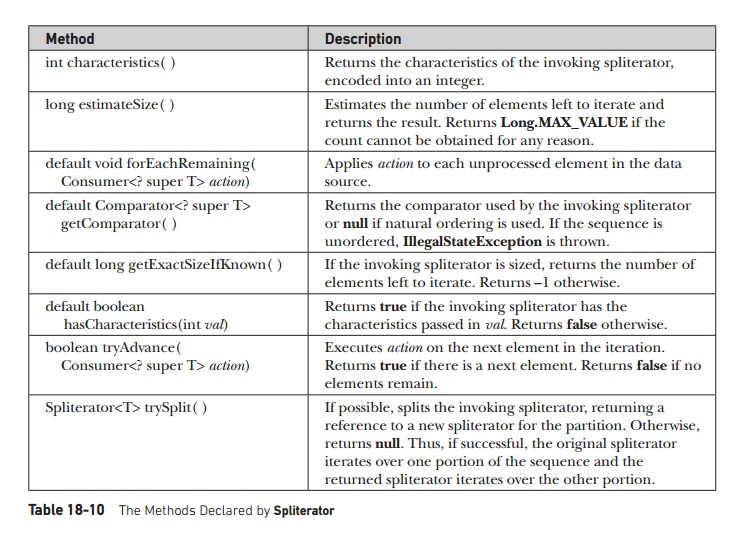 The following program provides a simple example of Spliterator. Notice that the program demonstrates both tryAdvance( ) and forEachRemaining( ). Also notice how these methods combine the actions of Iterator’s next( ) and hasNext( ) methods into a single call.

//Use tryAdvance() to display contents of vals.

Although this program demonstrates the mechanics of using Spliterator, it does not reveal its full power. As mentioned, Spliterator’s maximum benefit is found in situations that involve parallel processing.