Functional genomics research will provide an unprece-dented information resource for the study of biochemical pathways at the molecular level.

Functional genomics research will provide an unprece-dented information resource for the study of biochemical pathways at the molecular level. Certainly a large number of the ~25,000 genes identified in sequencing the human genome will be shown to be functionally important in various disease states (see druggable genome discussion above). This will result in the identification of a vast array of proteins implicated as playing pivotal roles in disease processes (Evans, 2003). These key identified proteins will serve as potential new sites for therapeutic intervention (Fig. 1). The research area called proteomics seeks to define the function and correlate that with expression profiles of all proteins encoded within an organism’s genome or “proteome” (Edwards et al., 2000; Kreider, 2001; Voshol et al., 2007). The ~25,000 human genes can produce 100,000 proteins. The number, type and concentration may vary depending on cell or tissue type, disease state, and other factors. The proteins’ function(s) aredependent on the primary, secondary, and tertiary structure of the protein and the molecules they interact with. Less than 20 years old, the concept of proteomics requires determination of the structural, biochemical and physiological repertoire of all proteins. Proteomics is a greater scientific challenge than genomics due to the intricacy of protein expression and the complexity of 3-D protein structure (structural proteomics) as it relates to biological activity (functional proteomics) (Saeks, 2001). Protein expression, isolation, purification, identification, and characterization are among the key procedures utilized in proteomics research. To perform these procedures, technology platforms such as 2-D gel electrophoresis, mass spectrometry, chip-based micro-arrays, X-ray crystal-lography, protein nuclear magnetic resonance (NMR), and phage displays are employed. Initiated in 2002, the Human Proteome Organization (HUPO) recently completed the first large-scale study to characterize the human serum and plasma proteins, i.e., the human serum and plasma proteome (States et al., 2006). Pharmaceutical scientists anticipate that many of the proteins identified by proteomic research will be entirely novel, possessing unknown functions. This scenario offers not only a unique opportunity to identify previously unknown molecular targets, but also to develop new ultrasensitive diagnostics to address unmet clinical needs (Petricoin et al., 2002). Today’s methodology does not allow us to identify valid drug targets and new diagnostic methodologies simply by examining gene sequence information. However, “in silico proteomics”, the computer-based prediction of 3-D protein structure, intermolecular interactions, and functionality is currently a very active area of research (Roberts and Swinton, 2001; Voshol et al., 2007). 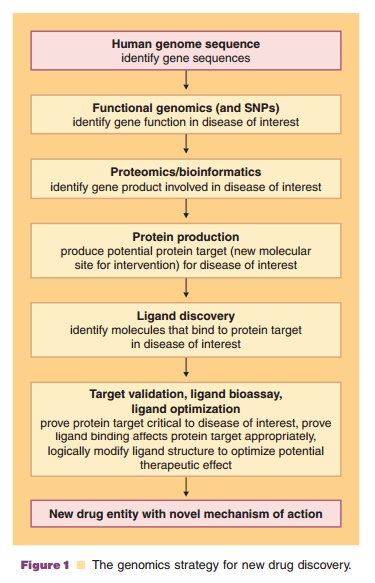 Often, multiple genes and their protein products are involved in a single disease process. Since few proteins act alone, studying protein interactions will be paramount to a full understanding of functionality. Also, many abnormalities in cell function may result from over-expression of a gene and/or protein, under-expression of a gene and/or protein, a gene mutation causing a malformed protein, and post-translation modification changes that alter a protein’s function. Therefore, the real value of human genome sequence data will only be realized after every protein coded by the 25,000 genes has a function assigned to it.