Peptide chemistry and biology have become very popular fields of study since the discovery that a large number of hormones, neurotransmitters and other endogenous chemical mediators are peptides.

Peptide chemistry and biology have become very popular fields of study since the discovery that a large number of hormones, neurotransmitters and other endogenous chemical mediators are peptides (some examples are listed in Table 5). Peptide receptors are attractive targets in drug discovery and design efforts. Thus, both peptides and proteins have the potential to be developed into useful therapeutic agents. Peptides, like the larger proteins, may be produced by various genetic methods (as described for proteins. As smaller molecules, however, chemical synthesis is quite viable. Both classical solution methods and newer solid phase approaches based on the technique originally developed by Merrifield (the chemistry occurs while the growing peptide chain is anchored 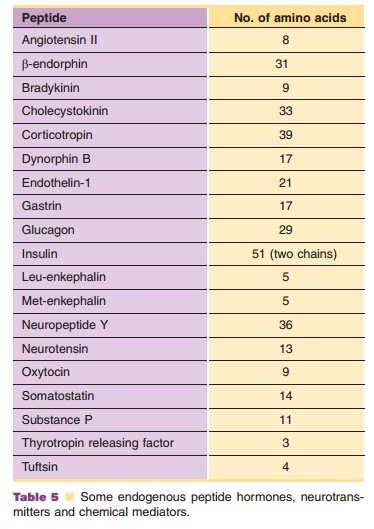 onto a polymeric bead) have been applied to the synthesis of thousands of peptides of diverse struc-ture (Seneci, 2000; Mitscher and Dutta, 2003; Seneci, 2007; Ashton and Moloney, 2007). Peptides of 50 amino acids or greater are synthesized by automated solid phase peptide synthesizers.

Despite their achievable synthesis, peptides suffer from a number of characteristics that make them less suitable as drugs than the classical small organic molecule agents. In most cases, peptide pharmaceuticals are characterized by low oral bioa-vailability, poor passage through the blood-brain barrier (for CNS targeted peptides), metabolic in-stability catalyzed by endogenous peptidases (hydro-lysis of the amide bond), and rapid urinary and biliary excretion (Luthman and Hacksell, 1996). Also, the inherent flexibility of peptide molecules allows them to adopt multiple, low energy conformations or shapes. This property permits a peptide drug to interact with several different similar peptide recep-tors. Side effects and low affinity can result from this lack of selectivity at target receptor sites. Numerous peptide modifications have been studied to overcome the limitations that make peptides poorly suited as drugs (Goodman and Ro, 1995; Luthman and Hacksell, 1996; Nakanishi and Kahn, 1996; Abell, 1999; Estiarte and Rich, 2003).

The isolation and structure elucidation of two endogenous morphine-like pentapeptides, leu-enke-phalin and metenkephalin, formally introduced the study of peptidomimetics. Morphine, a narcotic alkaloid, and the enkephalins were conclusively demonstrated to elicit their analgesia by binding to the same opioid receptor (Fig. 10). Therefore, mor-phine acts as a narcotic analgesic because it is a nature-synthesized mimic of the endogenous penta-peptides. Peptidomimetics (sometimes called peptide mimetics and nonpeptide mimetics) are substitutes for peptides that possess not only the peptide’s affinity for interactions with receptors and/or en-zymes, but also efficacy. Numerous reviews on the topic are available (Giannis and Rubsam, 1997; Ripka and Rich, 1998; Estiarte and Rich, 2003).

There are a number of approaches to the discovery of peptidomimetics that interact with spe-cific peptide receptors (Obrecht et al., 1999). An empirical approach to peptidomimetic discovery is the screening of pure compound libraries and complex mixtures (from natural product extracts, microbial fermentations or combinatorial chemistry) (Giannis and Rubsam, 1997; Gron and HydeDeRuyscher, 2000). A screening success was the discovery of the potent cholecystokinin (CCK) receptor antagonist asperlicin (Fig. 10) from a fermentation and the subsequent 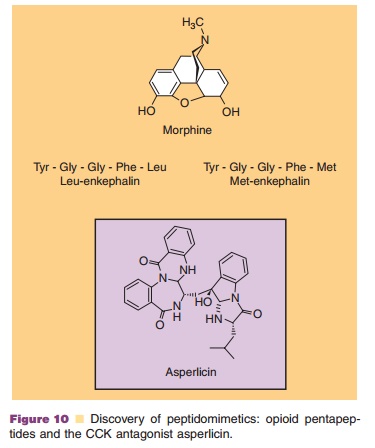 medicinal chemistry development of additional agents (Wiley and Rich, 1993). This nonpeptide natural product containing a 1,4-benzodiazepine moiety acts as a peptidomimetic antagonist at a receptor for a neuroactive peptide ligand (CCK). Computer-aided molecular modeling is often used to design better analogs (exhibiting improved affinity and selectivity) of the lead molecule discovered via such an empirical approach.

The peptidomimetic approach known as “pseudopep-tides” is an attempt to improve the biostability of peptides (Hirschmann et al., 1995). Numerous pseudo-peptides (also called amide bond surrogates) have been prepared that substitute an amide bond bioisostere for the amide peptide bond. A bioisostere is a replacement of an atom or groups of atoms while retaining a broadly similar bioactivity. Examples of some bioisosteric pep-tide bond replacements are shown in Figure 11 (Luthman and Hacksell, 1996). This type of substitution changes the backbone of the peptide and may alter its conformation. Bioisosteric pseudopeptides do exhibit decreased endogenous peptidase-mediated hydrolysis, however, many still suffer from insufficient oral bioa-vailability. An interesting amide bond bioisostere is the tetrazole analog (a five-membered ring with four nitrogens, see Fig. 11) that also serves to restrict the backbone conformation of the peptide amide bond to the cis-orientation. 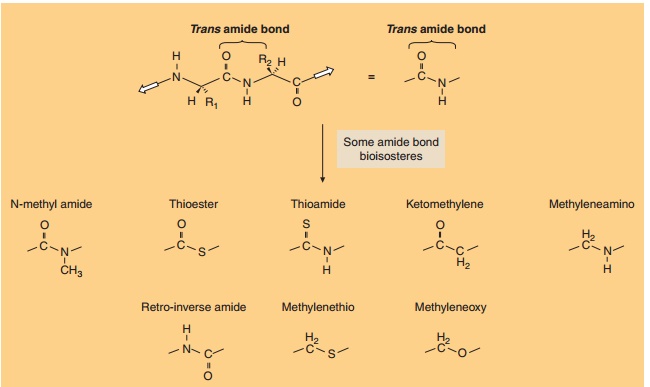