Chronic lymphocytic leukemia (CLL) and small lymphocytic lymphoma (SLL) are very similar; they both represent an abnormal proliferation of B cells.

Chronic lymphocytic leukemia (CLL) and small lymphocytic lymphoma (SLL) are very similar; they both represent an abnormal proliferation of B cells. Patients who pres-ent with lymph node findings are classified as having SLL. Patients who present with blood findings are classified as having CLL; 50% of CLL patients also have lymph node involvement.

•         The malignant cells are nonfunctional, so patients develop hypogammaglobu-linemia, leading to an increased risk of infections.

•         CLL is associated with warm autoimmune hemolytic anemia (AIHA) (10% of cases), which will cause spherocytes to be observed in peripheral blood.

CLL and SLL can be categorized by the markers present on the B cells:

•         T-chronic lymphocytic leukemia cells (5% of cases) have T-cell markers. The histology of affected lymph nodes reveals only a diffuse pattern (not nodular), but proliferation centers may also be present.

Hairy cell leukemia is a rare B-cell neoplasm that causes indolent disease in middle-aged Caucasian men. There can be a “dry tap” with bone marrow aspiration. Lym-phocytes have “hairlike” cytoplasmic projections; the diagnostic stain is positive tartrate-resistant acid phosphatase (TRAP).

•         Most common form of non-Hodgkin lymphoma in the United States

•         Prognosis is better than diffuse lymphoma, but it doesn’t respond to therapy (unlike the more aggressive diffuse non-Hodgkin lymphomas) 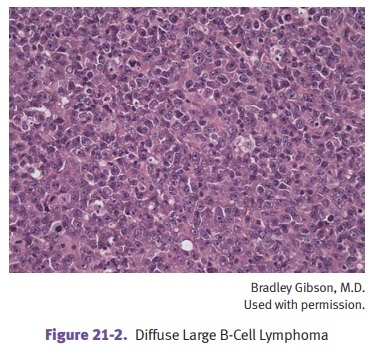 Small noncleaved lymphoma (Burkitt lymphoma) is a high grade B-cell lymphoma. It is composed of intermediate-sized lymphoid cells with a “starry sky” appearance due to numerous reactive tingible-body macrophages (phagocytosis of apoptotic tumor cells). There is a characteristic t(8;14) translocation juxtaposing MYC to the immunoglobulin heavy chain locus in most cases.

°°    Involvement of mandible or maxilla is characteristic; is associated with Epstein-Barr virus

°°    Involvement of the abdomen (such as bowel, retroperitoneum, or ova-ries); has a high incidence in AIDS patients

Both endemic and sporadic forms of Burkitt lymphoma are seen most often in children and young adults. 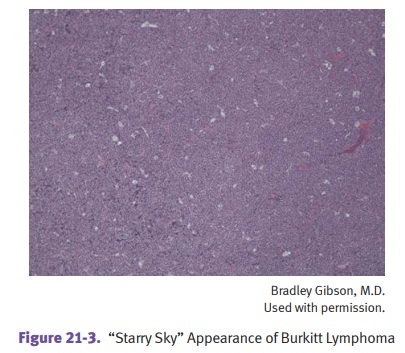 Mantle cell lymphoma (MCL) is a rare B-cell lymphoma in which the tumor cells arise from mantle zone B lymphocytes (positive for CD19, CD20, and CD5; nega-tive for CD23). The characteristic translocation is t(11;14), involving CCD1 and the heavy chain locus.

Marginal zone lymphoma (MALToma) is a diverse group of B-cell neoplasms that arise within lymph nodes, spleen, or extranodal tissue. It is associated with mucosa-associated lymphoid tissue (MALTomas). The lesion begins as a reactive polyclonal reaction and may be associated with previous autoimmune disorders or infectious disease (e.g., Sjögren disease, Hashimoto thyroiditis, Helicobacter gastritis). The lymphoma remains localized for long periods of time.

Multiple myeloma is a malignant neoplasm of plasma cells.

•         Most common primary tumor arising in the bone marrow of adults

•         Bence Jones proteins are light chains that are small and can be filtered into urine.

Increased risk of infection is the most common cause of death. Other complications include renal disease (such as myeloma nephrosis) and primary amyloidosis (10% of patients) due to amyloid light (AL) chains. Increased amounts of IL-6 are associated with a poorer prognosis because survival of myeloma cells is dependent on IL-6. 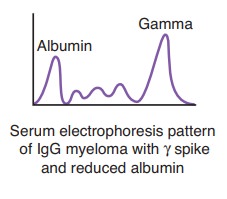 Plasmacytoma is a solitary myeloma within bone or soft tissue.

•         Within bone: precursor lesion that can later develop into myeloma

Like myeloma, it has an M spike (IgM). Like SLL (and unlike myeloma), the neo-plastic cells infiltrate many organs (e.g., lymph nodes, spleen, bone marrow). Also unlike multiple myeloma, there are no lytic bone lesions and there is no increase in serum calcium. Russell bodies (cytoplasmic immunoglobulin) and Dutcher bodies (intranuclear immunoglobulin) may be present.

•         May have hyperviscosity syndrome, because IgM is a large pentamer

•         Neurologic symptoms include headaches and confusion

•         Bleeding and cryoglobulinemia can be due to abnormal globulins, which pre-cipitate at low temperature and may cause Raynaud phenomenon