1. Single-User versus Multiuser Systems 2. Transactions, Database Items, Read and Write Operations, and DBMS Buffers 3. Why Concurrency Control Is Needed 4. Why Recovery Is Needed

One criterion for classifying a database system is according to the number of users who can use the system concurrently. A DBMS is single-user if at most one user at a time can use the system, and it is multiuser if many users can use the system—and hence access the database—concurrently. Single-user DBMSs are mostly restricted to personal computer systems; most other DBMSs are multiuser. For example, an airline reservations system is used by hundreds of travel agents and reservation clerks concurrently. Database systems used in banks, insurance agencies, stock exchanges, supermarkets, and many other applications are multiuser systems. In these systems, hundreds or thousands of users are typically operating on the data-base by submitting transactions concurrently to the system.

Multiple users can access databases—and use computer systems—simultaneously because of the concept of multiprogramming, which allows the operating system of the computer to execute multiple programs—or processes—at the same time. A single central processing unit (CPU) can only execute at most one process at a time. However, multiprogramming operating systems execute some commands from one process, then suspend that process and execute some commands from the next

process, and so on. A process is resumed at the point where it was suspended when-ever it gets its turn to use the CPU again. Hence, concurrent execution of processes is actually interleaved, as illustrated in Figure 21.1, which shows two processes, A and B, executing concurrently in an interleaved fashion. Interleaving keeps the CPU busy when a process requires an input or output (I/O) operation, such as reading a block from disk. The CPU is switched to execute another process rather than remaining idle during I/O time. Interleaving also prevents a long process from delaying other processes.

If the computer system has multiple hardware processors (CPUs), parallel processing of multiple processes is possible, as illustrated by processes C and D in Figure 21.1. Most of the theory concerning concurrency control in databases is developed in terms of interleaved concurrency, so for the remainder of this chapter we assume this model. In a multiuser DBMS, the stored data items are the primary resources that may be accessed concurrently by interactive users or application programs, which are constantly retrieving information from and modifying the database.

The database model that is used to present transaction processing concepts is quite simple when compared to the data models that we discussed earlier in the book, such as the relational model or the object model. A database is basically represented as a collection of named data items. The size of a data item is called its granularity. A data item can be a database record, but it can also be a larger unit such as a whole disk block, or even a smaller unit such as an individual field (attribute) value of some record in the database. The transaction processing concepts we discuss are inde-pendent of the data item granularity (size) and apply to data items in general. Each data item has a unique name, but this name is not typically used by the programmer; rather, it is just a means to uniquely identify each data item. For example, if the data item granularity is one disk block, then the disk block address can be used as the data item name. Using this simplified database model, the basic database access operations that a transaction can include are as follows:

As we discussed in Chapter 17, the basic unit of data transfer from disk to main memory is one block. Executing a read_item(X) command includes the following steps:

1. Find the address of the disk block that contains item X.

3. Copy item X from the buffer to the program variable named X.

1.    Find the address of the disk block that contains item X.

3.    Copy item X from the program variable named X into its correct location in the buffer.

4.    Store the updated block from the buffer back to disk (either immediately or at some later point in time).

It is step 4 that actually updates the database on disk. In some cases the buffer is not immediately stored to disk, in case additional changes are to be made to the buffer. Usually, the decision about when to store a modified disk block whose contents are in a main memory buffer is handled by the recovery manager of the DBMS in cooperation with the underlying operating system. The DBMS will maintain in the database cache a number of data buffers in main memory. Each buffer typically holds the contents of one database disk block, which contains some of the database items being processed. When these buffers are all occupied, and additional database disk blocks must be copied into memory, some buffer replacement policy is used to choose which of the current buffers is to be replaced. If the chosen buffer has been modified, it must be written back to disk before it is reused.

Concurrency control and recovery mechanisms are mainly concerned with the database commands in a transaction. Transactions submitted by the various users may execute concurrently and may access and update the same database items. If this concurrent execution is uncontrolled, it may lead to problems, such as an inconsistent database. In the next section we informally introduce some of the problems that may occur.

3. Why Concurrency Control Is Needed

When a database access program is written, it has the flight number, flight date, and the number of seats to be booked as parameters; hence, the same program can be used to execute many different transactions, each with a different flight number, date, and number of seats to be booked. For concurrency control purposes, a trans-action is a particular execution of a program on a specific date, flight, and number of seats. In Figure 21.2(a) and (b), the transactions T1 and T2 are specific executions of the programs that refer to the specific flights whose numbers of seats are stored in data items X and Y in the database. Next we discuss the types of problems we may encounter with these two simple transactions if they run concurrently.

The Lost Update Problem. This problem occurs when two transactions that access the same database items have their operations interleaved in a way that makes the value of some database items incorrect. Suppose that transactions T1 and T2 are submitted at approximately the same time, and suppose that their operations are interleaved as shown in Figure 21.3(a); then the final value of item X is incorrect because T2 reads the value of X before T1 changes it in the database, and hence the updated value resulting from T1 is lost. For example, if X = 80 at the start (originally there were 80 reservations on the flight), N = 5 (T1 transfers 5 seat reservations from the flight corresponding to X to the flight corresponding to Y), and M = 4 (T2 reserves 4 seats on X), the final result should be X = 79. However, in the interleaving of operations shown in Figure 21.3(a), it is X = 84 because the update in T1 that removed the five seats from X was lost.

The Temporary Update (or Dirty Read) Problem. This problem occurs when one transaction updates a database item and then the transaction fails for some rea-son (see Section 21.1.4). Meanwhile, the updated item is accessed (read) by another transaction before it is changed back to its original value. Figure 21.3(b) shows an example where T1 updates item X and then fails before completion, so the system must change X back to its original value. Before it can do so, however, transaction T2 reads the temporary value of X, which will not be recorded permanently in the data-base because of the failure of T1. The value of item X that is read by T2 is called dirty data because it has been created by a transaction that has not completed and committed yet; hence, this problem is also known as the dirty read problem.

The Incorrect Summary Problem. If one transaction is calculating an aggregate summary function on a number of database items while other transactions are updating some of these items, the aggregate function may calculate some values before they are updated and others after they are updated. For example, suppose that a transaction T3 is calculating the total number of reservations on all the flights; meanwhile, transaction T1 is executing. If the interleaving of operations shown in Figure 21.3(c) occurs, the result of T3 will be off by an amount N because T3 reads the value of X after N seats have been subtracted from it but reads the value of Y before those N seats have been added to it. 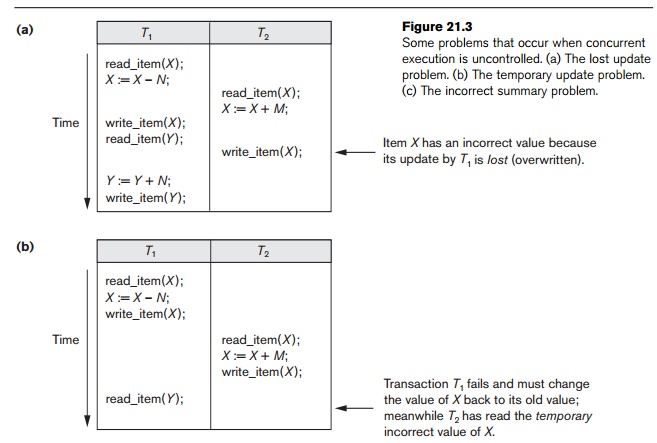 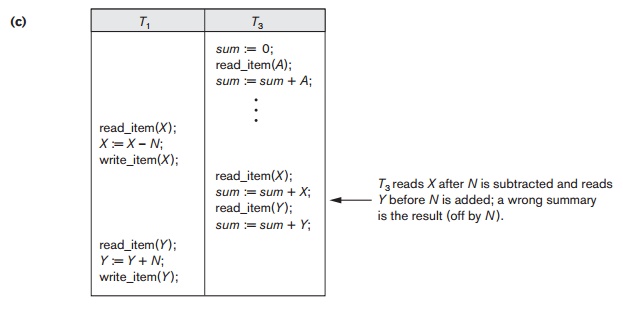 The Unrepeatable Read Problem. Another problem that may occur is called unrepeatable read, where a transaction T reads the same item twice and the item is changed by another transaction T between the two reads. Hence, T receives different values for its two reads of the same item. This may occur, for example, if during an airline reservation transaction, a customer inquires about seat availability on several flights. When the customer decides on a particular flight, the transaction then reads the number of seats on that flight a second time before completing the reservation, and it may end up reading a different value for the item.

4. Why Recovery Is Needed

Types of Failures. Failures are generally classified as transaction, system, and media failures. There are several possible reasons for a transaction to fail in the mid-dle of execution:

A transaction or system error. Some operation in the transaction may cause it to fail, such as integer overflow or division by zero. Transaction failure may also occur because of erroneous parameter values or because of a logical programming error.3 Additionally, the user may interrupt the transaction during its execution.

Disk failure. Some disk blocks may lose their data because of a read or write malfunction or because of a disk read/write head crash. This may happen during a read or a write operation of the transaction.

Physical problems and catastrophes. This refers to an endless list of problems that includes power or air-conditioning failure, fire, theft, sabotage, overwriting disks or tapes by mistake, and mounting of a wrong tape by the operator.

Failures of types 1, 2, 3, and 4 are more common than those of types 5 or 6. Whenever a failure of type 1 through 4 occurs, the system must keep sufficient information to quickly recover from the failure. Disk failure or other catastrophic failures of type 5 or 6 do not happen frequently; if they do occur, recovery is a major task. We discuss recovery from failure in Chapter 23.

The concept of transaction is fundamental to many techniques for concurrency control and recovery from failures.