Gulliver, a ship’s doctor, took a job on a ship that was going on a long voyage. The voyage started well but soon things changed dramatically. The ship got caught in a violent storm and was thrown off course. Then it hit a rock and broke up completely. Six of the crew members, including Gulliver, got into a small boat and rowed until they were overturned by a big wave which came up suddenly. Gulliver was a good swimmer and he managed to swim till he reached land.

The coast appeared strange and lonely. Gulliver dragged himself along the shore. He looked for some people or houses. But there was no sign of life. Hungry and exhausted he fell on a patch of grass and fell into a deep sleep. 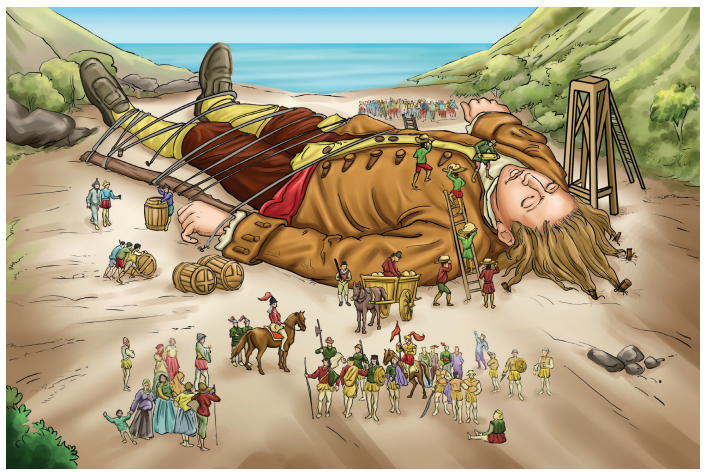 When Gulliver woke up he was lying on his back and the sun was in his face. When he tried to get up he found himself unable to sit up or move at all. Terrified and puzzled, he tried to turn his head. He found his arms and legs were securely tied with slender strings on each side and attached to pegs fixed on the ground. His hair, which was long and thick, was similarly tied down. He felt something moving along his body almost up to his chin. To his surprise, he saw a human being not six inches high, with a bow and arrow in his hands, and a quiver at his back. Gulliver later learnt that these creatures were called Lilliputians. Startled by this sight, Gulliver cried out and soon managed to free his left arm. The frightened Lilliputians fired dozens of tiny arrows into his hand, face, and body until he once again lay down calmly. The Lilliputians then built a stage to Gulliver's side that was about a foot and a half tall, upon which an obviously important person stood and made a ten-minute speech to Gulliver in a language he could not understand.

By now Gulliver was really hungry. With gestures he signaled to the little people that he wanted food and drink. The Lilliputians first got Gulliver to promise to behave himself and then promised to get him some food. They soon brought baskets of meat and several loaves of bread, which he ate three at a time because they were so tiny. The Lilliputians also brought two barrels of drink, which he enjoyed, even though the barrels were smaller than a glass.

Gulliver was tempted, as he lay on the ground, to take up fifty of the small creatures in his hand and crush them, but he did not want to be pricked with arrows again, and he had promised to behave in exchange for good treatment.

After he had eaten, Gulliver promptly fell asleep because his drink had a sleeping draught in it. They then set about transporting Gulliver to the capital. They used a large platform with twenty-two wheels pulled by dozens of four-and-a-half-inch horses. They somehow managed to put him on the platform and dragged Gulliver down the road to the city. Suddenly Gulliver woke-up when the vehicle stopped. Two or three curious, young Lilliputians wanted to see how Gulliver looked when asleep. They climbed up into the engine, and advancing very softly to his face, put the sharp end of their half-pike into his left nostril. This tickled Gulliver’s nose like a straw, and made him sneeze. As they started moving again, Gulliver saw that more than one hundred thousand Lilliputians had come out to see the strange giant. It was a carnival atmosphere and the Lilliputians seemed to be enjoying themselves, much to Gulliver’s amusement. Finally, they arrived at the Emperor's palace. The Emperor was there to receive Gulliver. Gulliver was lodged in an old and disused temple. His leg was chained and he could only move about a little bit. After a few weeks, the Lilliputians and their Emperor decided that he meant them no harm. So Gulliver was set free to roam around Lilliput on condition that he would not harm them and would help them in whatever way he could. Gulliver agreed and was freed. He was provided with food and water, a house was built for him. Gulliver stayed with Lilliputians helping them in many ways. Once, it so happened, that the neighbouring kingdom of Blefuscu declared war on Lilliput. The king brought a hundred ships to mount an attack. The Lilliputians ran to Gulliver for help. The Emperor said, "Don't let us down now, Gulliver; we need your help." 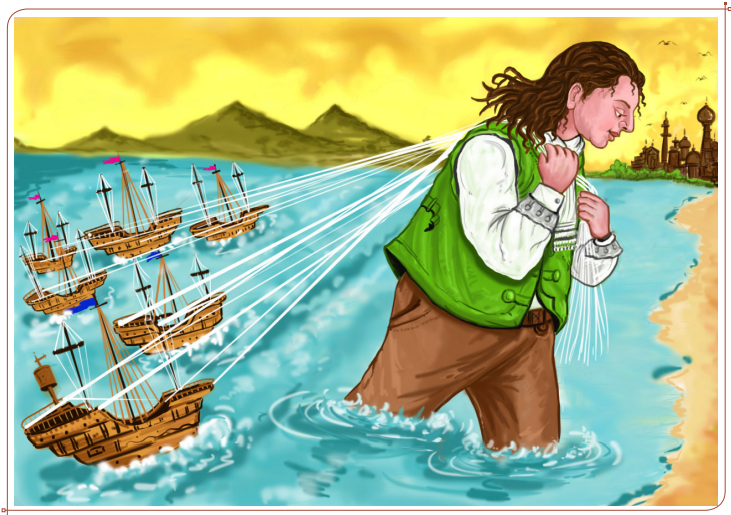 Gulliver walked into the sea. He took a long rope, tied all the hundred ships together and dragged them in the water. Gulliver pulled the ships the whole day, going round and round until the army of Blefuscu was giddy and in no position to fight. The King of Blefuscu came begging for peace between the two kingdoms. The Emperor agreed. Gulliver was hailed as a hero and lived peacefully in Lilliput for many years.