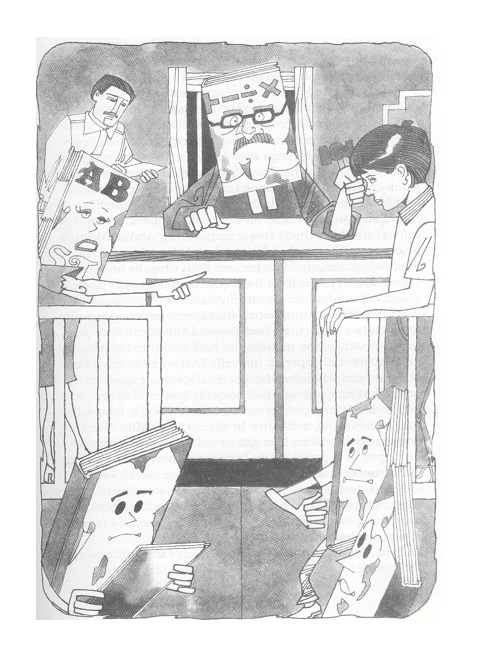 This has got to stop immediately," Justice Mathematics said in a stern voice, rapping the hammer for silence in the court. He pushed back the horn-rimmed glasses up his nose and glared first at Manu and then at the crowd in the court.

Covered  with  ink  and  grease  spots,  mercilessly  dog-eared and  two  corners  chewed  away,  she  looked  a wreck.  Tears rolled  down  Ms.  English's  cheeks.

Offering her  a handkerchief,  Justice  Mathematics  asked gently,  "How  did  it  happen,  Ms.  English?"

"Did  Manu  not  get  scolded  and  punished  in  the  school for  that?"  Justice  Mathematics  enquired.

The  audience was  stunned,  ill-treating a delicate  creature like  Ms.  English!  How  terrible!

Justice  Mathematics' face  became  dark when he  heard that

Manu tore  off pages  from  the  copies  to  make  paper  planes.

Manu withered under  his murderous look.

Justice Mathematics  looked  carefully and found  that the voice   belonged   to   a   small  notebook,   much   in   the   same condition  as  others.

The  Master Notebook got hold  over himself and  continued,

A  shock wave  rent  the  courtroom  and  everybody  started talking at once.  Justice Mathematics went red with anger as he  banged  the  hammer  loudly,  and  you  could  see  that  he was wishing that  the  table were  Manu.  Manu,  meanwhile, stared  at  his  boots.  Was he  really that  cruel?  He  felt really ashamed  of himself.

He  looked  at  all  the  bedraggled  books  and  notebooks, pencils and pencil box,  and the school bag in the court. They, in turn looked at Manu,  each and every one of them in terrible anger.  Manu trembled in his  shoes.

"I  suggest  dragging  him  around  the  courtroom  a  dozen

This appealed to  all of them  and even Justice Mathematics got up from his  chair to join the gang!

Menacingly they all advanced towards  Manu,  who  looked around  frantically  for  somewhere  to  run  to,  somewhere  to hide...  Nothing! There was no place to run to!

Manu looked  at her in  admiration,  he  could have hugged her!  She was the one who had been treated most shamefully by  him  and  look  at  her!  Standing  so  staunchly  by  him!

The others too  saw reason and  slowly backed off,  agreeing to  give  Manu  a  second  chance, "Manu,   see  that  you  never  ill-treat  a  book  again!"  was Justice  Mathematics'  parting  shot.